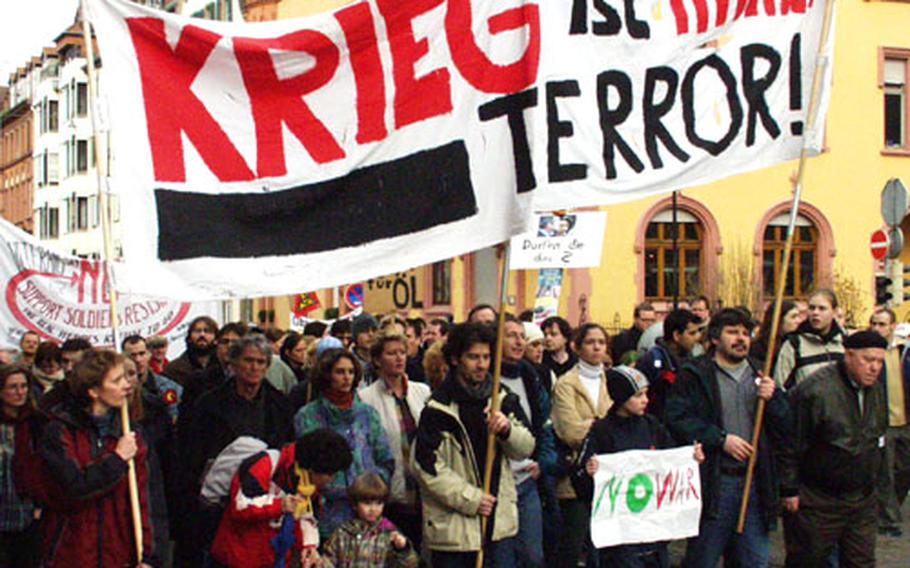 Hundreds of protesters march through the streets of Heidelberg, Germany, behind a banner proclaiming "War is always terror." They later attempted to link arms in a human chain around U.S. Army Europe headquarters in Heidelberg. (Rick Scavetta / S&S)

Hundreds of protesters march through the streets of Heidelberg, Germany, behind a banner proclaiming "War is always terror." They later attempted to link arms in a human chain around U.S. Army Europe headquarters in Heidelberg. (Rick Scavetta / S&S) 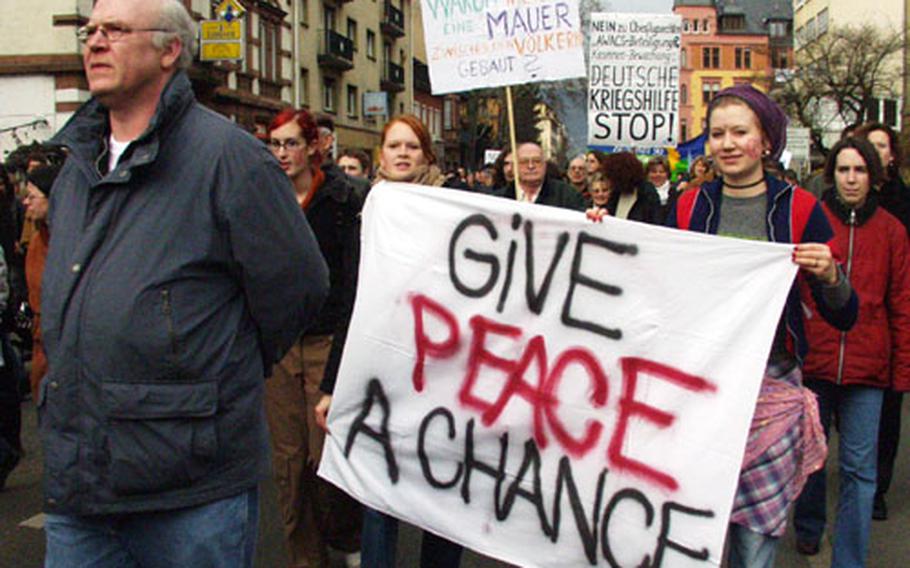 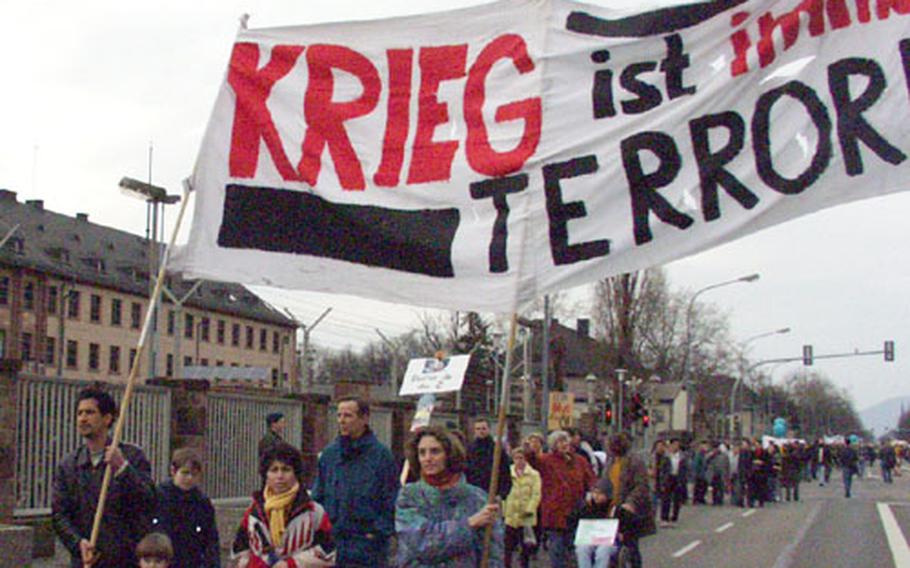 The human chain could not completely surround the base&#8217;s approximately 1&#188;-mile perimeter as some of the adjacent streets that wind though U.S. housing areas were kept off-limits to demonstrators.

The demonstration was one of several staged Saturday in Germany and elsewhere around the world.

At 2 p.m., more than 1,000 protesters began marching from Bismarckplatz, in Heidelberg&#8217;s center, south toward Campbell Barracks. Along the way, they shouted, blew whistles and gained strength. By the time they reached the headquaraters, their numbers reached 3,500, according to Harald Kurzer, a Heidelberg police spokesman.

The line of marchers temporarily halted public transportation as nearly 300 German police kept order, lining the streets and riding motorcycles around the crowds. There were no injuries or incidents reported to police, Kurzer said.

At the forefront of the parade, U.S. Army veteran Dave Blalock and fellow members of the Stop the War Brigade shouted chants reminiscent of military cadence calls.

The anti-war brigade, made up of U.S. and foreign military veterans, has led several protests outside U.S. bases in Germany over the past month.

The demonstration brought out all ages. Gray-haired women marched beside children and baby strollers. While some anti-American sentiment surfaced, most demonstrators said their oppostion was focused on a possible U.S.-led attack on Iraq and recent statements by President Bush.

Helga Knaute, 63, who protested deployment of Army Pershing missiles in the 1980s, said the pending war prompted her to again take to the streets.

Dozens of other middle-aged and elderly Germans participated, recalling the protests of the 1960s. Helmut Staudt, 62, first joined the anti-war movement while studying in the States during Vietnam. He too criticized the Bush administration.

The demonstration weaved its way passed several unguarded U.S. housing units. A handful of military police were behind the fences and barricades on Campbell Barracks.

The Army had warned American soldiers and their families to steer clear of the base on Saturday, said Sandy Goss, a spokesman for the Installation Management Agency-Europe Region.

Still, many residents of Mark Twain Village, the U.S. housing area adjacent to Campbell Barracks, lined the street corners or watched from their windows. Several family members said they are concerned about the lack of guards at the unfenced community.

Meanwhile, in Tuzla, Bosnia and Herzegovina, up to 2,000 people gathered to protest a possible war against Iraq.

Sinan Alic, the editor of the Front Slobode newspaper, recalled the horrors Bosnians experienced during the country&#8217;s 1992-1995 war. Such firsthand experience of war, he said, gave them the moral duty to join worldwide calls for peace.

At the same time, Alic stressed that the protest was neither against the United States nor in favor of Iraq&#8217;s President Saddam Hussein.