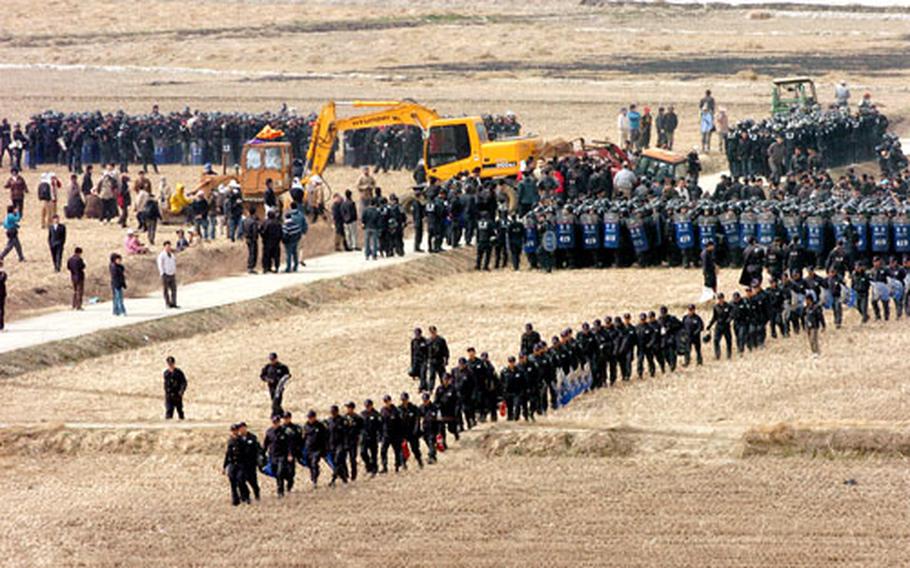 In a contested rice field near Camp Humphreys, South Korea, on Friday, police move into position during a day of clashes with residents opposing a government move to evict them from the area. The South Korean government wants to clear the area of occupants to enable Humphreys to triple in size and become the U.S. military’s main installation on the peninsula. (F. Neil Neeley / U.S. Army)

But workers managed to stop a third irrigation canal by filling it with cement, police in Pyeongtaek said Friday.

The canal was blocked despite what police termed &#8220;severe and violent&#8221; resistance from protesters who oppose the government&#8217;s efforts to evict remaining residents and farmers from the area.

The government is seeking to clear the area of occupants so the land can be used to enable Camp Humphreys to triple in size in coming years and become the U.S. military&#8217;s chief installation in South Korea.

South Korea&#8217;s defense ministry put about 750 workers into the area Friday to attempt to block the irrigation canals.

They were escorted by about 3,000 riot-equipped Korean National Police officers, who took up positions at various points throughout the area.

Six protesters were hospitalized and seven others detained at a local police station, police said.

As night fell Friday, police and protesters remained in the area amid the prospect of further clashes, police said.

The defense ministry undertook Friday&#8217;s action as part of a larger move to evict remaining occupants from the land. The government took legal control of 2,328 acres of land last year to clear the way for the Camp Humphreys expansion called for in a U.S.-South Korean agreement.

But some farmers and other residents have refused a government effort to evict them and have vowed to plant a new spring rice crop in defiance of the government&#8217;s orders.

The ministry said recently it will not be deterred in eventually evicting the remaining occupants and fencing in the land. Ministry officials also have said that they would cut trenches across roads and block water supply to the fields.

The contested area includes the farming village of Daechu-ri, which borders part of Camp Humphreys.

Meanwhile, the defense ministry Friday issued a statement spelling out its position on the conflict with the holdout residents.

It said that of 535 households in the area over which it has taken legal control, residents in 300 have moved out. In Daechu-ri and Dodu-ri villages, about half the original 297 property owners agreed to sell to the government, the ministry said.

The ministry said it regretted having to move residents from the area. But it said the Camp Humphreys expansion was tied to South Korea&#8217;s national security.

Resistance to the effort, the ministry&#8217;s statement said, wastes money and risks straining diplomatic relations between South Korea and the United States.

Mun Jeong-hyeon, a Catholic priest who has been prominent in helping lead the resistance, was not immediately available for comment Friday night.

Pyeongtaek train station in downtown Pyeongtaek, the Pyeongtaek City Hall and the areas adjacent to both.The following villages and the routes to and from them: Daechu-ri, Bonjeong-ri, Wonjeong-ri, Nae-ri, Dodu-ri, Hamjeong 1-ri, Hamjeong 2-ri and Duejeong-ri. The restriction did not apply to those traveling between work and home.Camp Humphreys&#8217; northern perimeter road from the 3rd Military Intelligence Battalion headquarters area to the South Korean Ministry of National Defense compound main gate in the Zoeckler Station area.Walking, hiking, running or biking in the area west of Camp Humphreys to the Anjun River.&#8212; Stars and Stripes