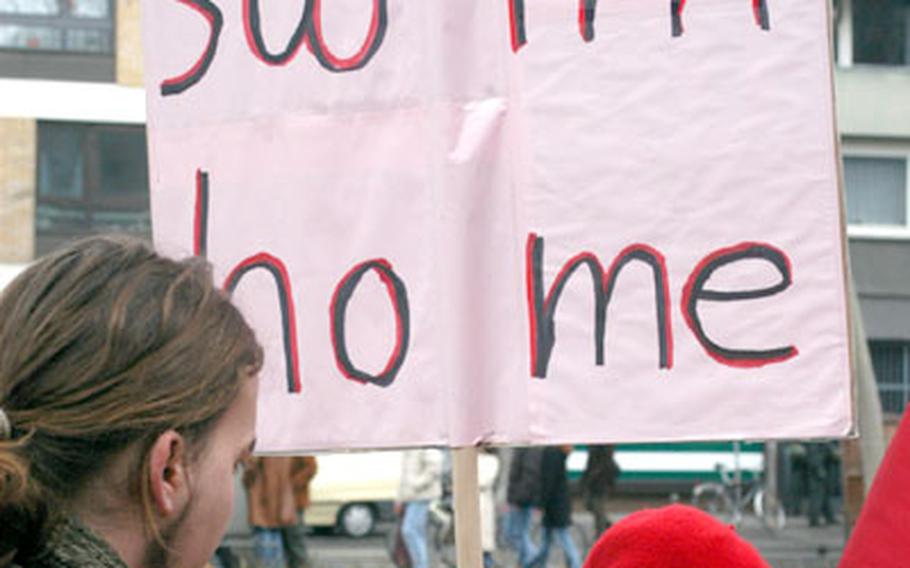 A protester expresses her thoughts about President Bush during a demonstration Wednesday in Mainz, Germany. (Peter Jaeger / S&S)

MAINZ, Germany &#8212; Thousands of people who gathered Wednesday to protest President Bush as he visited with German Chancellor Gerhard Schroeder had a few choice words for the president.

Under a light snow, protesters packed a square on Kaiserstrasse in the heart of the government district to object to Bush&#8217;s foreign policy. They carried signs and made speeches lambasting the administration on a wide array of issues, from the Iraq war and prisoner treatment at the U.S. detention facility in Guantanamo Bay, Cuba, to the U.S. refusal to sign the Kyoto Protocol on climate change.

Similar flags hung from the dome of the Christus church on the square.

Bush&#8217;s first visit to Germany since his re-election gave Gross a rare chance to make public his objections to an &#8220;illegal war&#8221; in Iraq, Gross said. He drove 300 miles from Bad Tolz to attend the event.

Some Americans who live in Germany joined the demonstration, which local police say was organized by the Berlin-based Achse des Friedens, which translates to &#8220;Axis of Peace.&#8221;

David Carson, a San Antonio native living in Hanau, told the crowd he was ashamed to be a Texan because of what Bush&#8217;s home state has come to represent in the world.

The crowd reacted with cheers and whistles to another speaker who blamed Bush for the deaths of thousands of innocent people in Iraq and other countries.

Wearing a white T-shirt with &#8220;Hands off Iran&#8221; written in red letters, Frarh Waziri listened from the back of the square. Waziri, an Iranian who lives in Marburg, said she was concerned with increased military presence in the Middle East.

After the event, protesters filed out of the square and began a march around parts of the government district not shut off by steel gates and police in green uniforms.

About 7,000 to 10,000 protesters turned out for the event, according to German police on the scene.