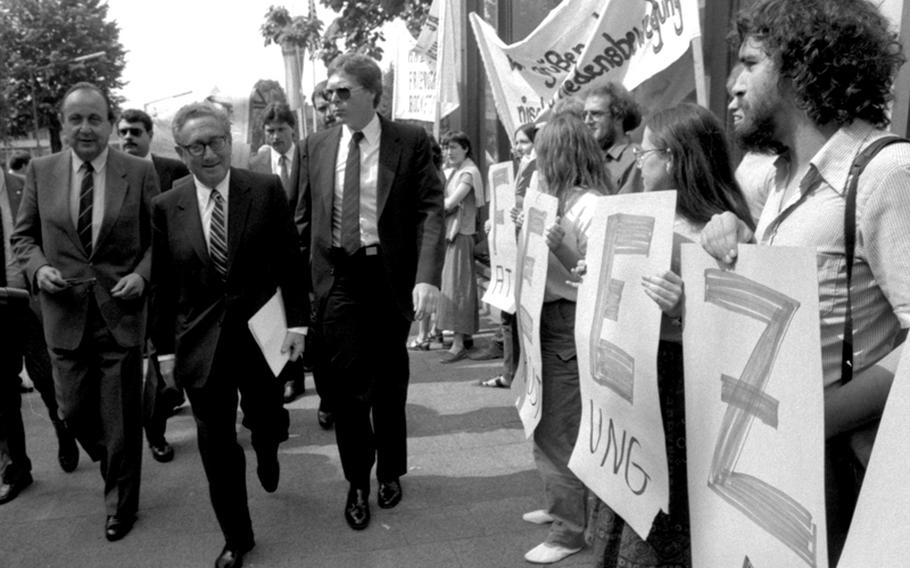 Buy Photo
Former Secretary of State Henry Kissinger walks past a line of protesters on his way to speak at a German-American tricentennial ceremony at Worms, Germany, in 1983. At left is German Foreign Minister Hans-Dietrich Genscher. The protesters are holding letters forming the word "freeze," in connection with nuclear disarmament. (L. Emmett Lewis Jr./Stars and Stripes)

Buy Photo
Former Secretary of State Henry Kissinger walks past a line of protesters on his way to speak at a German-American tricentennial ceremony at Worms, Germany, in 1983. At left is German Foreign Minister Hans-Dietrich Genscher. The protesters are holding letters forming the word "freeze," in connection with nuclear disarmament. (L. Emmett Lewis Jr./Stars and Stripes) 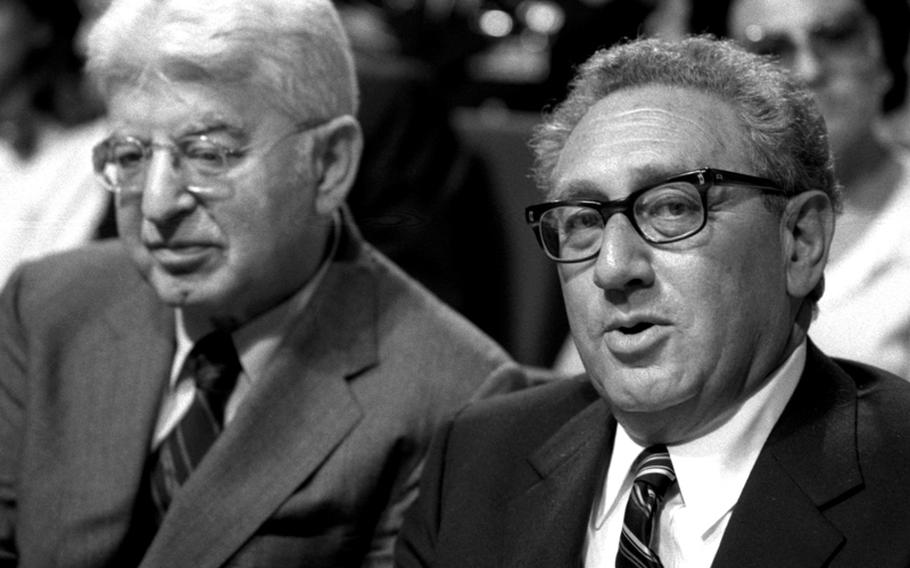 An estimated 20,000 Germans and Americans attended ceremonies at the Festival Hall here and on the market square to hear Kissinger, German Foreign Minister Hans-Dietrich Genscher, Arthur Burns, U.S. ambassador in Bonn, and Dr. Bernhard Vogel, president of the state of Rheinland-Pfalz, speak of the ties that lead to German-American friendship.

Kissinger urged the Germans not to weaken the U.S. government position in the Geneva disarmament talks with the Soviets by considering unilateral disarmament.

He also told a small group of anti-Kissinger demonstrators that the U.S. military guaranteed their right to express their opinion.

Genscher said the men. and women serving in the U.S. and German armies were the true servants of peace.

Before Kissinger could speak, a U.S.based group of hecklers attempted to taunt him from the audience.

Kissinger told the audience that the group follows him around and since his wife, Nancy, once reacted sharply to such heckling, they only show up when she isn't there.

Burns noted that in addition to the tricentenary, 1983 marked the 500th anniversary of the birth of church reformer Martin Luther who proclaimed his religious belief in Worms against all opposition.

"May I suggest that we use this occasion to rededicate ourselves to the principle that the freedom to speak .. . worship, and live according to individual conscience ... are worth preserving," Burns said.

The Unity Day ceremonies, organized by a group of Germans from the Rheinland-Pfalz, were boycotted by the state's Social Democratic Party (SPD), whose chairman, Willy Rothley, accused the sponsors of running a public-relations show to help pave the way for the deployment of the Pershing Its and cruise missiles this year.

The association denied the charge, but said it organized the event to try to counter any negative effects of recent anti-missiles demonstrations on German-American relations.

Hermann Glessgen, a journalist and one of the founders of the association from Landstuhl, said, "We want to show that there arc many more Germans who want the Americans here."

There are more than 150,000 U.S. soldiers and their dependents stationed in the Rheinland-Pfalz.

The association presented its medal for the first time to Germans and Americans who have been notable in their work for better understanding between the two countries. Kissinger was the first recipient.

As an answer to the Worms manifestation, the SPD plans to hold a German-American festival in Neustadt in September, Rothley said. .

At that time, Rothley said, they intend to invite "the other democratic America" to Germany; members of the Freeze Movement, Sandinistas from Nicaragua and guerrillas from El Salvador.

The tricentennial celebrations in Germany climax June 25 with the visit to Krefeld of Vice President George Bush for a ceremony marking the emigration from Krefeld to Philadelphia of 13 German families &mdash; the first German settlers &mdash; in 1683.

In October, President Reagan will host German President Karl Carstens at a special ceremony in Philadelphia to mark the same event.