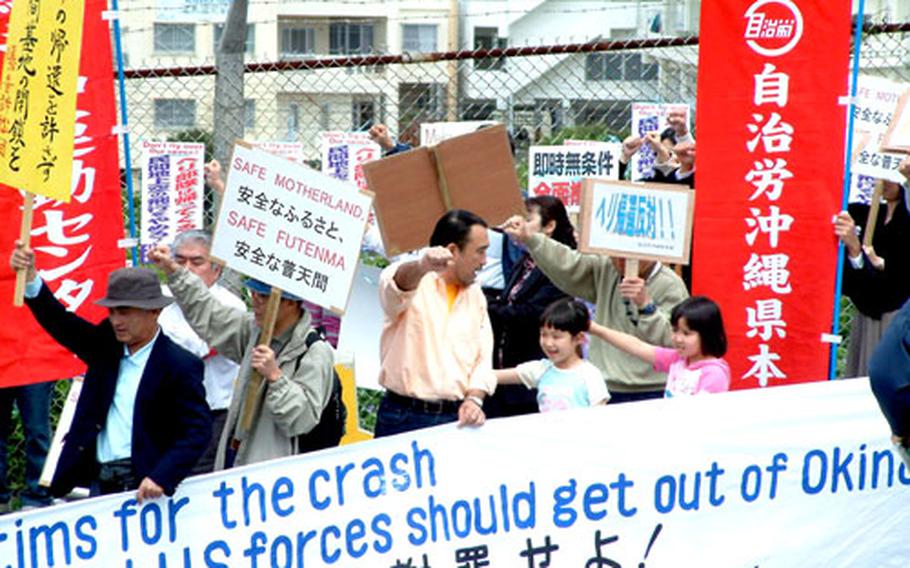 A father leads his daughters in a protest chant Friday during a demonstration by about 50 people outside Marine Corps Air Station Futenma, Okinawa. The group was protesting the return of U.S. Marines from Iraq. (David Allen / S&S)

A father leads his daughters in a protest chant Friday during a demonstration by about 50 people outside Marine Corps Air Station Futenma, Okinawa. The group was protesting the return of U.S. Marines from Iraq. (David Allen / S&S) 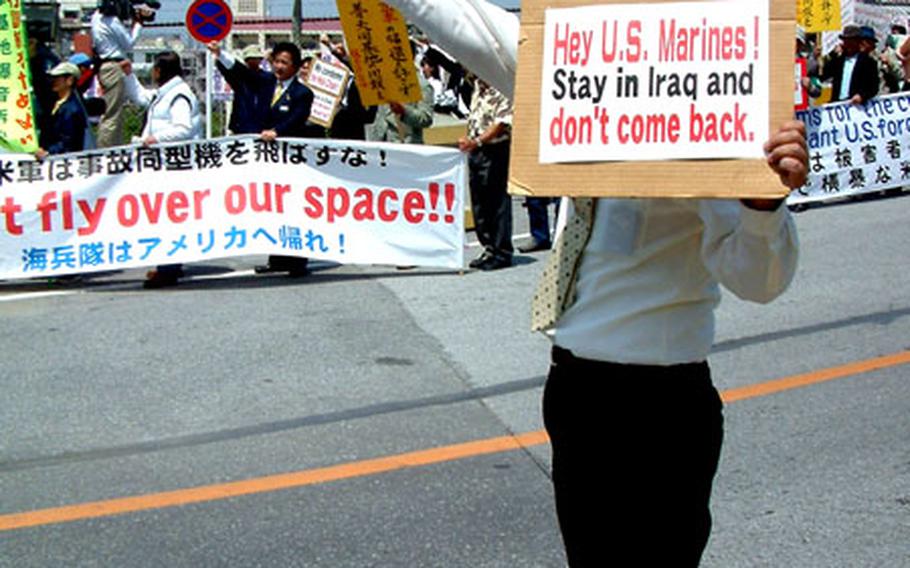 GINOWAN, Okinawa &#8212; About 50 protesters gathered outside the Nodake gate to Marine Corps Air Station Futenma on Friday to protest the return of the aviation combat element of the 31st Marine Expeditionary Unit from Iraq.

The protest was peaceful and focused on the Aug. 13 crash of a Marine helicopter in a neighborhood adjacent to the air station. No civilians were injured in the crash, but the crippled helicopter damaged the administration building of Okinawa International University and debris damaged nearby homes.

The protest, which lasted about an hour, began at noon and was organized by the Okinawa Peace Activity Center and the Ginowan Municipal Employees Labor Union.

&#8220;Despite repeated calls from the residents of Ginowan and the people of Okinawa to not allow the helicopters to return, they came back today,&#8221; said Zenji Shimada, one of the protest organizers. &#8220;They are about to resume their activities on this out-of-date base,&#8221; he said.

&#8220;The military says that the helicopters are thoroughly checked, but we cannot trust their words,&#8221; Shimada added.

On Thursday, Kazuyoshi Umemoto, a counselor in the Ministry of Foreign Affairs&#8217; North American Bureau, requested all aircraft returning to MCAS Futenma be thoroughly inspected before returning.

&#8220;U.S. Forces Japan and the Marine Corps take safety, both in the air and on the ground, very seriously,&#8221; responded Maj. Gen. Timothy Larsen, USFJ&#8217;s deputy commander. &#8220;Rigorous preflight checks will be conducted before all flight operations.&#8221;

&#8220;At a time when the U.S. and Japanese governments are conducting talks on dispersing the operations of the air station elsewhere, these helicopter units dare to return,&#8221; he said angrily. &#8220;It&#8217;s as if they are determined to stay here, bringing back the danger from the war zones.

&#8220;Sixty years ago today, the Marine Corps landed on Okinawa and has occupied the island ever since,&#8221; he said. &#8220;We must clearly voice our opposition against the military to continuously stay here.&#8221;

Okinawa police also reported Friday night that about 200 anti-base protesters demonstrated briefly in front of the Headquarters gate to Camp Foster, off Highway 330, following a rally at a Ginowan elementary school.

Many of the protesters also stopped briefly at the a gate near the Futenma Housing Area on Camp Foster and shouted anti-American slogans, according to residents of base housing.