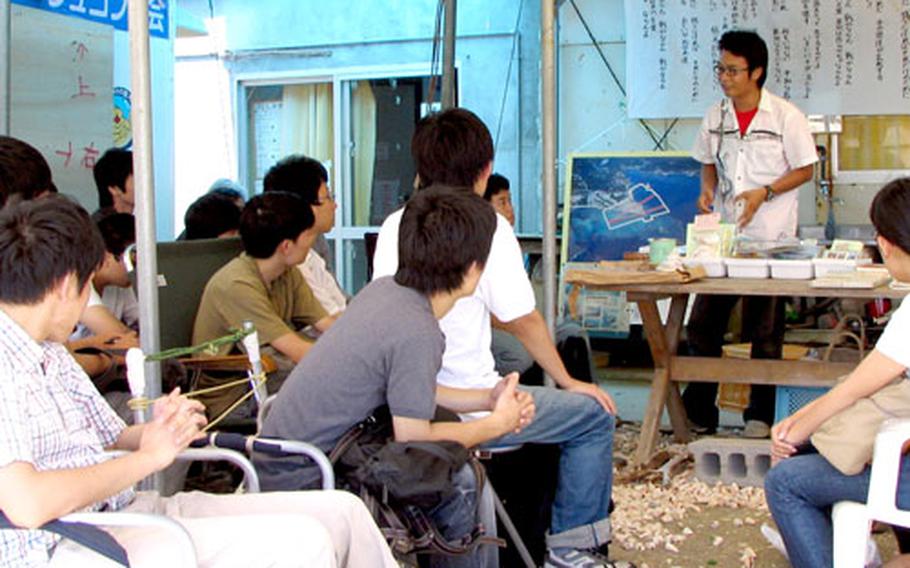 Shin Tomita, an antibase activist, briefs a group of college students from Tokyu University and Hitotsu Bashi University on his group’s opposition to construction of a new Marine air station on Camp Schwab. Some 30 protesters staged a sit-in at the camp’s main gate on Friday. (David Allen / S&S)

On Thursday, the small group of demonstrators succeeded in driving away two officials with the Nago Board of Education&#8217;s Cultural Asset Preservation Section who were to begin a required archaeological and cultural survey of a portion of the base sited for a new barracks. The project would replace buildings that will have to be razed to make room for a new air facility planned to replace Marine Corps Air Station Futenma.

The protesters said they are against the new airport and are opposed to what they believe will be a &#8220;hasty&#8221; survey of the site.

About 30 protesters were on hand for a peaceful demonstration from about 9:45 to 11:30 a.m., according to Gunnery Sgt. Chuck Albrecht, a Marine Corps spokesman.

Japanese police, who have jurisdiction over events outside base gates, were present during the demonstration, as were officials from the Japan Defense Facilities Administration Bureau, Albrecht said, but no arrests were made.

On Friday, about 30 protesters returned, sat in front of traffic and had to be forcibly removed from the area, an Okinawa police spokesman said.

The DFAB officials entered the base both days to inspect the survey site, but the actual survey was to be conducted by the board of education.

He said no arrests were made and no injuries were reported.

Japan and the United States agreed in May to move Marine air operations from MCAS Futenma to the lower part of the Henoko Peninsula occupied by Camp Schwab in northern Okinawa. The project is slated for completion by 2014.

Susumu Inamine, director of the city board of education, said the purpose of the survey is to preserve cultural assets. He met with the protesters Thursday and asked for their understanding.

Meanwhile, an official with DFAB said the survey would go on despite the protests.

The protesters are members of the same anti-base alliance that camped out at the Henoko fishing port for more than two years in their fight against a project to build the Futenma replacement facility some two miles offshore.

As part of that protest, they floated an armada of small craft to interfere with Japanese officials on drill rigs who were attempting to take samples of the seabed. The plan was abandoned in September 2005.

&#8220;But, please do not get us wrong,&#8221; Sakae Toyama, 66, director of Peace Citizens&#8217; Network, said Friday of the Camp Schwab demonstration. &#8220;&#8230; DFAB is pressuring the city to rush the survey in order to meet their deadline for the airport project. We just want an independent survey, free from pressure from the central government.&#8221;