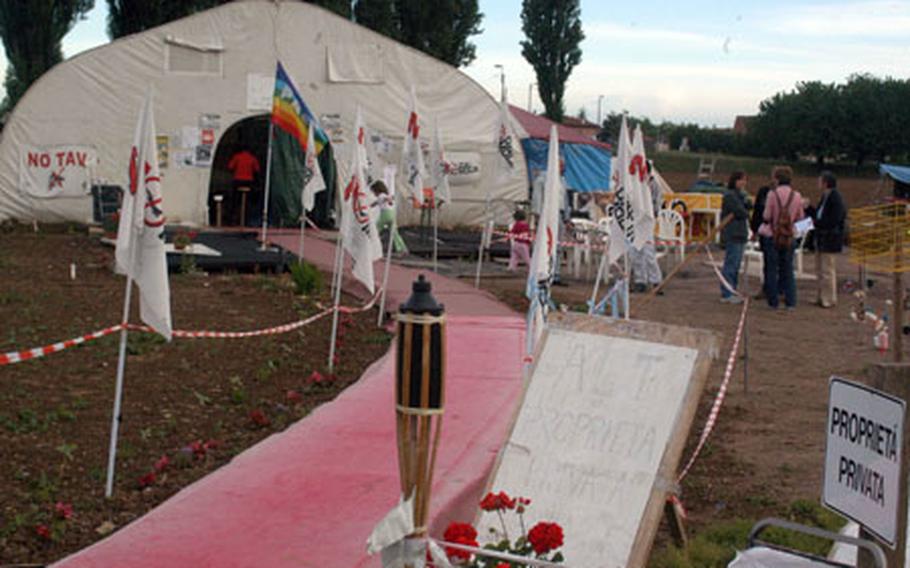 Italians against the proposed use of the Dal Molin airfield by U.S. Forces erected a tent in a farmer’s field near the Italian base in January and have had at least a few people there ever since. Protesters are also lobbying against other issues, such as high-speed trains. (Kent Harris / S&S)

VICENZA, Italy &#8212; Opposition to the proposed American development of the Dal Molin airfield has been a life-changing experience for some Italians.

One group set up a tent on a farmer&#8217;s field near the site in January, and at least a few people have been on site ever since. Conditions are a little like what U.S. soldiers sometimes face downrange: no running water or electricity, but plenty of dirt. Of course, there&#8217;s no shooting or mortars hitting near the large white tent that serves as the main structure in the small compound.

Most American forces stationed across town aren&#8217;t even aware of the protesters.

The Italian protesters break up the day into shifts. Those who spend the night take turns sleeping in a tiny trailer nearby. There&#8217;s also a portable toilet a short distance away. Tuesday nights, they pool money to buy gasoline to power a generator that lights up the interior of the tent. Then they meet to talk about strategy or receive updates.

Nadia Mantese, a gardener for a co-op who lives in a nearby town, was one of the few there on Sunday evening. Many of the others were on their way across town to protest at a concert featuring the U.S. Air Forces in Europe band, she said. She&#8217;s only been volunteering at the tent for a few days. She can spare the time on the weekends and sometimes during the week after work. Other volunteers include students and retirees with flexible schedules.

That includes Danilo Schenato, who will turn 76 in September. Schenato has been many things in his life &#8212; farmer, waiter and hospice worker among them &#8212; but he&#8217;s also a veteran protester. He&#8217;s staged hunger strikes in Sarajevo (before the Serb bombardment of the city) and another in Italy to protest the closing of a hospital.

Sunday, he was spending his 22nd day of doing without one of the things Americans find so enticing about Italy: Italian food. Schenato said he had lost about 17 pounds on a hunger strike since April 15 by consuming no more than a liter of milk, a liter and a half of water, a pinch of salt and a spoonful of sugar each day.

But if such machines do clear them away, it probably won&#8217;t have anything to do with Americans using the base. U.S. officials maintain that Dal Molin works as a secondary base in Vicenza because the land is owned by the Italian government. Plans call only for structures within the perimeter fence.

Since the base has a small airfield, that&#8217;s led to wide speculation that U.S. Air Force fighter jets would be stationed there. Some articles have stated that Vicenza would boast the largest U.S. base outside the States and that all troops bound for Iraq and Afghanistan would pass through the base. The U.S. military has denied all those claims.

Ray, who used to work at Dal Molin when it hosted a NATO command responsible for air traffic over Bosnia, said he&#8217;s seen reports in the Italian media that the protesters are receiving money from political parties opposed to the U.S. expansion.

Mantese denied that, though, saying she and the others are donating their time. Or, in Schenato&#8217;s case, more than a few pounds of flesh.