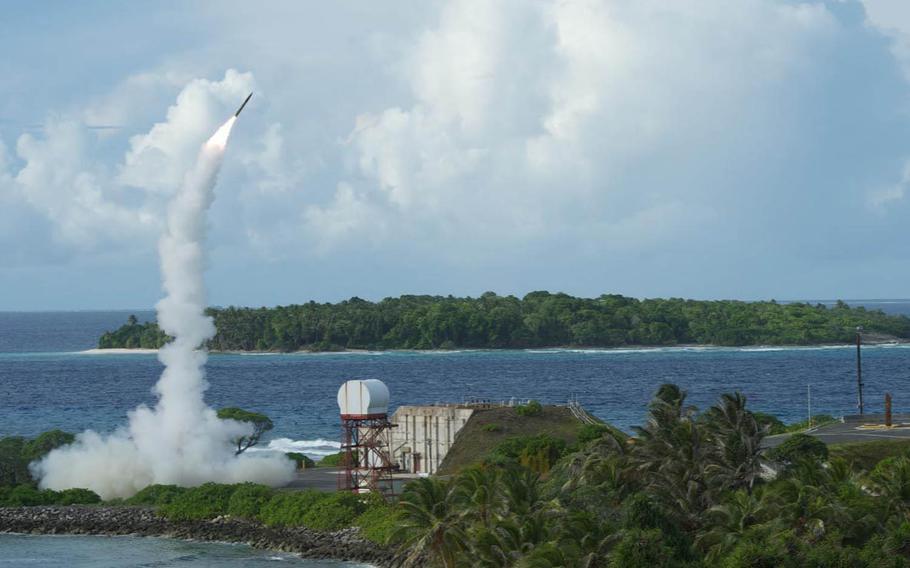 The second of two Terminal High-Altitude Area Defense, or THAAD, interceptors is launched during a successful intercept test in 2013. South Koreans have taken to the streets to oppose the U.S.-South Korean decision to station THAAD southeast of Seoul. (Ralph Scott/Missile Defense Agency)

SEOUL, South Korea — Protesters pelted top South Korean officials with eggs and water bottles and blocked a motorcade with tractors Friday as anger spread over a plan to deploy an advanced U.S. missile system near a southeastern farming town.

The South Korean military, meanwhile, vowed to respond firmly to North Korean threats following announcements that Washington and Seoul had agreed to station a Terminal High-Altitude Area Defense system, or THAAD, on the peninsula.

The military statement came after the North denounced the decision in strong terms, calling South Korean President Park Geun-hye a “rare traitor and a war servant obsessed with confrontation” with her northern rival.

South Koreans have taken to the streets to oppose the decision to deploy the THAAD in the remote, mountainous area of Seongju, southeast of Seoul. Protesters fear the system’s radar will have harmful effects on health, the environment and the economy. Several people, including local officials, have started a hunger strike.

Prime Minister Hwang Kyo-ahn visited the main town in the area, which is a stronghold of the governing Saenuri party, with Defense Minister Han Min-koo on Friday to try to soothe the concerns.

“I would like to apologize for making the decision without prior notice,” Hwang was quoted as saying by the Yonhap news agency.

He said the government would work with the community to choose the specific location of the defense system and to address safety concerns.

Many residents were not appeased, instead throwing water bottles and eggs at the ministers. A local official said there was also an hourslong standoff with hundreds of people and three tractors blocking a bus carrying the two men. Police were on the scene, but there was no violence, the official said, speaking on condition of anonymity.

A poll released Friday showed that about half of the 1,004 South Koreans who responded were in favor of the THAAD deployment, while 32 percent were against it, Yonhap reported. The number of supporters rose to 74 percent among members of the governing party in the Gallup Korea poll, which was conducted from Tuesday to Thursday and had a margin of error of plus or minus 3.1 percent.

The U.S. and South Korea say THAAD is needed to guard against a growing threat from the North, which conducted its fourth nuclear test in January, followed by a long-range rocket launch. Since then, Pyongyang has test-fired a string of ballistic missiles in defiance of a new round of toughened U.N. sanctions.

North Korea threatened last week to retaliate against the THAAD deployment with a “physical counter-action.” It also said it was closing its only communication channel with Washington — via its United Nations offices — to protest new U.S. sanctions against leader Kim Jong Un and other top officials for alleged human rights abuses.

“Now all Koreans are trembling with towering anger,” a spokesman for the North’s committee for the peaceful reunification of the country was quoted as saying Thursday. It added the committee “bitterly denounces in the name of all Koreans” the South Korean president and her administration.

The KCNA report called the decision “little short of selling off the sovereignty to the U.S.” and warned Park “will have to pay most severely and most bitterly for her unpardonable treacherous act.”

“North Korea needs to immediately stop its arrogant and insolent speech and conduct,” a spokesman said. “If North Korea ignores our warning and continues provoking and threatening us, it will face our firm and strong punishment.”

The issue is threatening to divide the country as opposition parties have expressed reservations over the move due to potential diplomatic and economic fallout from China and Russia. South Korea’s tourism industry is heavily dependent on Chinese tourists, and China is a key trade partner.

China and Russia objected strongly to last week’s THAAD announcement. Beijing, a traditional ally of the North, worries the system could be used to track its military. South Korea and the U.S. the defense system will be solely focused on the threat from North Korea.

North Korea insists its nuclear weapons program is for self-defense against a feared invasion. The peninsula is divided by the world’s most militarized border since the 1950-53 war ended in an armistice instead of a peace treaty. The U.S. keeps about 28,500 servicemembers in the South.