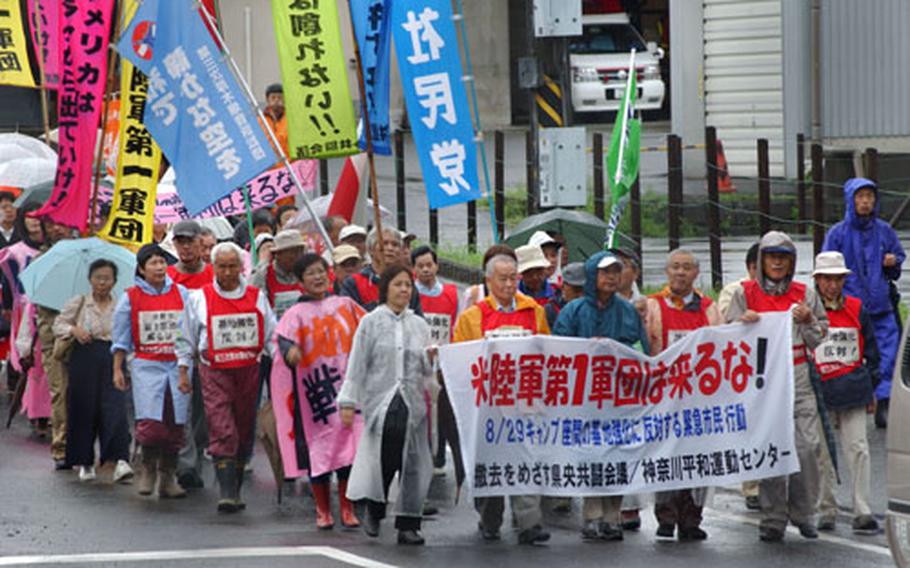 Between 120 and 200 people from two Japanese organizations marched to Camp Zama, Japan, on Sunday in a drizzling rain to protest unconfirmed Japanese media reports that a stateside U.S. Army command is to be moved to the installation.

A second protest was canceled due to worsening rains later in the day, said Sagamihara City spokesman Yasushi Senba.

The protesters, from Kanagawa Central Joint Struggle Committee and Kanagawa Peace Movement Center, delivered a letter to officials at Camp Zama asking the U.S. Army not to move the I Corps headquarters from Fort Lewis, Wash., to Camp Zama.

For months, local newspapers have reported a number of scenarios for troop movements in Japan, including bringing the headquarters element of I Corps to Zama.

I Corps is a contingency force made up of active-duty, reserve and National Guard units from across the United States.

Army and Defense Department officials have said that no plans are in place to move any units in Japan. Officials previously said that U.S. and Japanese leaders always are evaluating force postures in the country and that no decisions have been made.

He said he did not know whether Army leaders had received a letter from protesters Sunday.

Questions about troop strength have grown since President Bush announced plans in July to withdraw up to 70,000 overseas troops, mostly from Europe and South Korea. Bush&#8217;s announcement made no mention of Japan, where about 58,000 U.S. troops are based.

A protest walk from Zama to the JR Sobudai-shita station was canceled.

The protest was the first in the Zama area sparked by the media reports of possible troop movements. There were no arrests or incidents.