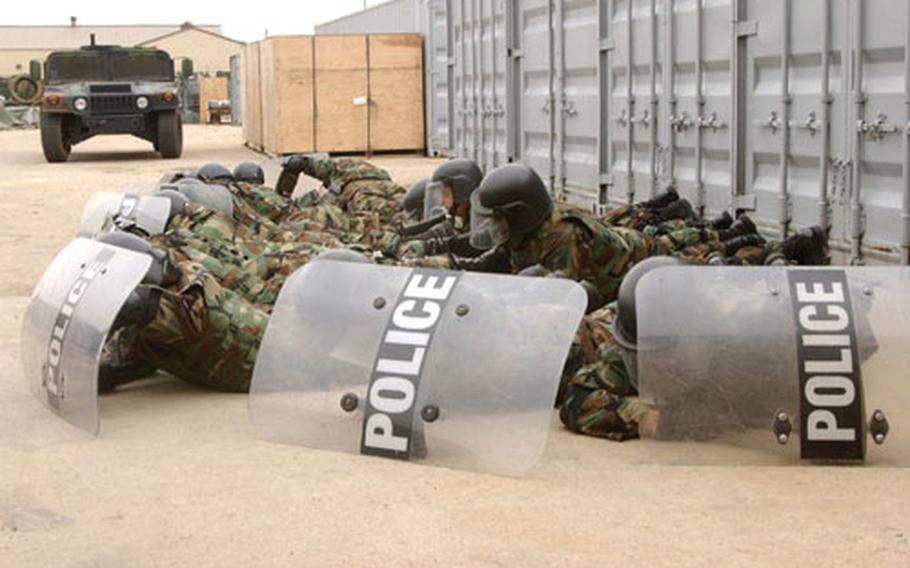 Members of a base protest operations squad practice what they would do in the event a protester had a gun during recent training. (Courtesy of USAF)

Members of a base protest operations squad practice what they would do in the event a protester had a gun during recent training. (Courtesy of USAF) 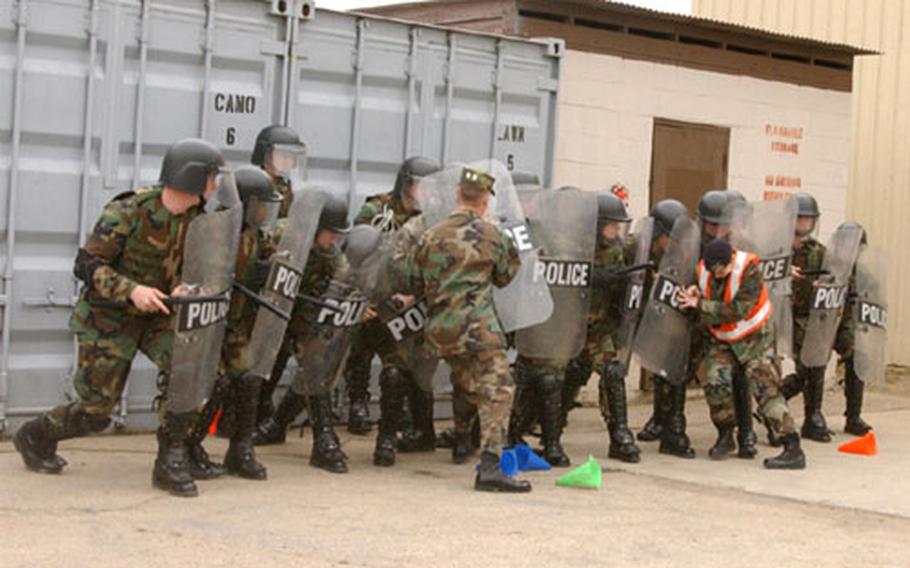 Members of a base protest operations squad practice maintaining a line as an instructor attempts to break through during recent training. (Courtesy of USAF)

TAEGU, South Korea &#8212; There had been no violence so far, so the Kunsan Air Base protest squad just stayed behind the wall, out of view of the South Korean protestors who were shouting for the U.S. military to go home.

About 90 minutes into the demonstration last fall, Staff Sgt. Brian Dwyer spotted smoke and flames rising from a house right outside the base gates.

The blue-clad Korean National Police handled the fire and the crowd. They guarded the base&#8217;s outer perimeter.

Had the demonstrators tried to force their way inside the base, Kunsan&#8217;s protest operations squad &#8212; made up of Air Force police officers who come up on the protest ops roster on a rotating basis &#8212; would have dashed from their staging place and formed a line against intruders.

But, he added, if protesters &#8220;found a place that wasn&#8217;t secured &#8230; then I would call my squad into place and they would act as a barrier.&#8221; And an apprehension team would have been ready to seize and handcuff intruders.

The squad is nothing new at Kunsan, but base defense at U.S. installations in South Korea has taken on fresh importance in the face of anti-U.S. protests over the past year. South Korean protesters have illegally entered U.S. installations across the peninsula, including Yongsan Garrison, headquarters for U.S. Forces Korea, and Camp Red Cloud, headquarters for the Army&#8217;s 2nd Infantry Division.

Each officer receives riot-control training before pulling duty with the squad.

A major point the training stresses is the need for squad members to keep formation and move as one.

The squad is kept out of sight unless the protesters try to breach the perimeter.