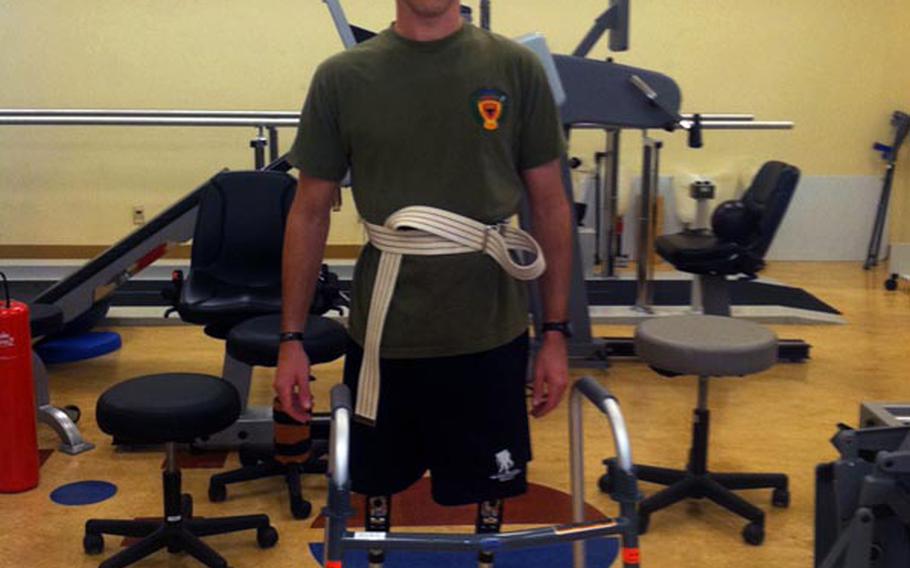 Cpl. Kevin Dubois, who lost his legs up to the hip in an IED attack, practices walking on prosthetic legs in the C5 department for wounded warriors at San Diego Naval Medical Center in November 2011. (Courtesy of Kevin Dubois) 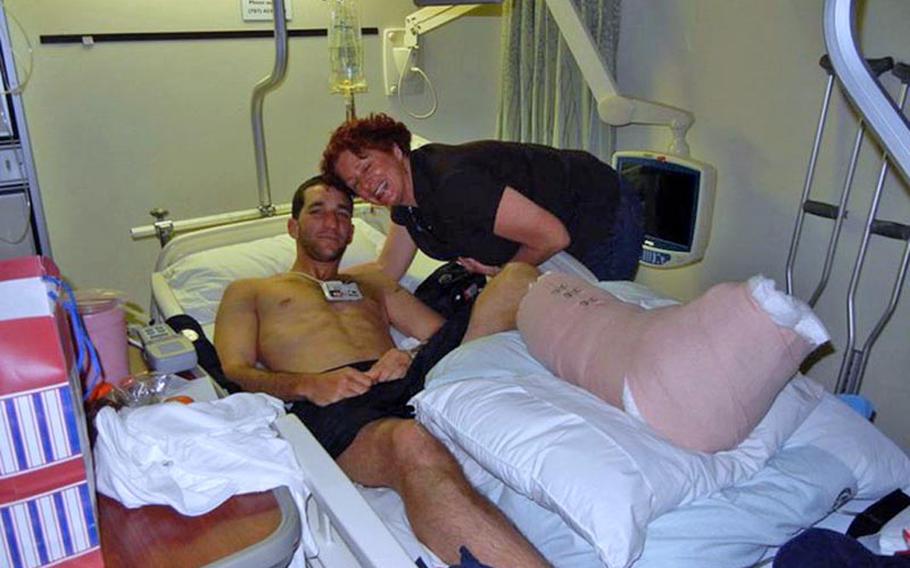 Prior to the amputation of his foot and lower leg, Petty Officer 3rd Class Redmond Ramos, injured in an IED blast in spring 2011 in Helmand province, Afghanistan, visits with his mother in the hospital at Travis Air Force Base outside San Francisco. (Courtesy of Redmond Ramos)

WASHINGTON &mdash; In late July last year, Marine Cpl. Kevin Dubois headed out to take the place of another Marine wounded while guarding a hastily setup landing zone near Sangin, a Taliban hotbed in southern Afghanistan.

Improvised explosive devices had taken a heavy toll all year, with Marines on dismounted patrols accounting for a disproportionate number of casualties. The guy that Dubois, a 25-year-old scout sniper, was sent to replace had stepped on a faulty homemade land mine.

Most of the explosive charge failed to ignite, but it still popped with enough force to injure a foot.

Another IED hidden nearby had been built with more skill.

Dubois remembers leaving the residential compound his unit had occupied and reaching the edge of the landing area as a helicopter approached. He remembers his last steps on the legs he was born with.

He learned from his wife, Kayla, and from his doctors that the massive IED blast had taken his legs. During the helicopter evacuation to a NATO trauma center, medics pumped 14 units of blood into Dubois &mdash; more than a typical human body contains &mdash; to keep him breathing.

Today a patient in a special unit at Naval Medical Center San Diego for the most severely wounded troops, he&rsquo;s carrying out his final mission as a Marine, a concentrated effort to stand up straight and walk again despite losing both legs up to his pelvis.

Since the wars in Iraq and Afghanistan began, about 1,400 deployed U.S. troops have suffered major amputation, defined as losing at least one arm or leg above the wrist or ankle, while many more have lost lesser body parts. In 2011, 240 servicemembers lost a major limb, according to Defense Department statistics. It was the highest annual total since the Afghanistan and Iraq wars began.

Through the experience of one servicemember, here&rsquo;s a glimpse into the system the U.S. military has devised to return to some of the most grievously injured troops a small measure of what was lost:

Like many serious combat casualties, Dubois had been stabilized at a progression of hospitals in Afghanistan in the hours after his injury. He was then flown for further acute care at Landstuhl Regional Medical Center in Germany, and ended up in Maryland at Bethesda National Naval Medical Center, now the site of the new Walter Reed National Military Medical Center.

Dubois, a member of the 3rd Battalion, 4th Marine Regiment at Twentynine Palms, Calif., ended up in San Diego. He was one of 60 new amputation cases the C5 facility took on in 2011, along with hundreds of other casualties of burns, blasts and bullets.

His assignment upon arrival was to heal and begin building the upper-body strength to help compensate for the loss of his legs.

Wounds like Dubois&rsquo; are fairly common at the center, which has 20 patients who have lost both legs and eight more who have lost three limbs, said Dr. (Maj.) Jay Pyo, who oversees the rehabilitation clinic at Naval Hospital San Diego.

The wounds the facility deals with are getting more complex yearly, mirroring the wider trend of increased survival of troops with extreme injuries, Pyo said.

After a short hospital stay and wheelchair training, Dubois moved to a nearby off-base apartment with his wife, a constant supportive presence who, he says, &ldquo;has been absolutely awesome through this entire thing.&rdquo;

As the four-month anniversary of his injury neared, Pyo approved Dubois for his first prosthetic fitting.

Since 2007, the C5 prosthetics program has been custom crafting state-of-the-art mechanical limbs for patients in the unit.

&ldquo;Nothing is off the shelf,&rdquo; said chief prosthetist Peter Harsch. &ldquo;We don&rsquo;t have anything here where we just put a prefabricated leg on someone.&rdquo;

The C5 experts have access to the most advanced prosthetics available. Some are motorized devices able to read muscle twitches in patients&rsquo; limb remnants and move almost subliminally. Others are lightweight nonpowered limbs with high-tech suspension components that some patients prefer for their durability and simplicity.

Ultimately, the patient decides what&rsquo;s attributes are most important, Harsch said. Whatever they choose, the work requires McGuyver-like ingenuity to make the machinery conform to bodies torn in myriad ways.

&ldquo;They challenge us as prosthetists to be creative,&rdquo; he said. &ldquo;Sometimes we have to think far outside the box, to the point I found myself walking through Home Depot ... looking for better alternatives to suspend legs.&rdquo;

About four months after the explosion, supported by a walker, Dubois took halting steps on a simple set of prosthetic legs. In recent weeks, prosthetists presented him with custom legs that may allow him to walk unsupported.

&ldquo;When I shift my hips to one side, it unloads the weight on the other side and swings the leg forward,&rdquo; he said. &ldquo;I just got them last week to test them out, and now they&rsquo;ve got them back making adjustments.

&ldquo;It&rsquo;s kind of pushing the limits of prosthetics.&rdquo;

Dubois has already picked out his next prosthetics device, one that will let him hit the ski slopes.

&ldquo;After I get my legs, the next one will be my snowboard bucket system,&rdquo; he said. &ldquo;I call it a bucket because it&rsquo;s basically me sitting in a bucket&rdquo; mounted to a snowboard.

Unlike amputees from the civilian populations, military amputees are generally young men formerly in prime physical condition. Most are unwilling to give up an active lifestyle, and sports like skiing and surfing are key to the C5 rehabilitation process.

&ldquo;Of the patients I&rsquo;ve worked with &mdash; over 200 &mdash; only a handful didn&rsquo;t have an interest in running,&rdquo; Harsch said. &ldquo;And the ones who didn&rsquo;t wanted to be able to bike, or at least go for a walk with their wife or girlfriend.&rdquo;

For dedicated athletes from the current wars who have lost limbs, the DOD is liberal in the range of prosthetics it provides.

&ldquo;Some people have a shoe rack. I have a leg rack,&rdquo; said Ramos, whose left foot was damaged by an IED as he ran to help an injured Marine. With little hope the shattered foot could ever be strong enough to walk on, he elected to replace it with the array of lower legs he now uses.

His next near-term athletic goal is to run a six-minute mile.

&ldquo;I know for 100 percent certain I would not be up and active like I am now if I had tried to keep the foot,&rdquo; Ramos said.

Dubois&rsquo; goals are measured in months and years.

Within perhaps six months, he plans to walk on his new legs using only a cane. Within about a year, he&rsquo;ll transition out of the military and move with his wife back to his native Rhode Island.

If he could, Dubois said, he would stay in the Marines and train new snipers. But his physical limitations don&rsquo;t let him get into the necessary shooting positions.

Instead, he plans to parlay his small-arms knowledge into a career as a gunsmith in Rhode Island, &ldquo;building guns, fixing them, modifying if someone needs it,&rdquo; he said. &ldquo;It would be awesome if I could open up my own gun shop someday. That&rsquo;s the goal.&rdquo;

Dubois sees himself standing behind the counter dealing with his customers eye to eye.

&ldquo;Walking is what feels more normal to me. I can&rsquo;t explain it other than that,&rdquo; he said. &ldquo;If I can walk, that&rsquo;s what I&rsquo;m going to do.&rdquo;