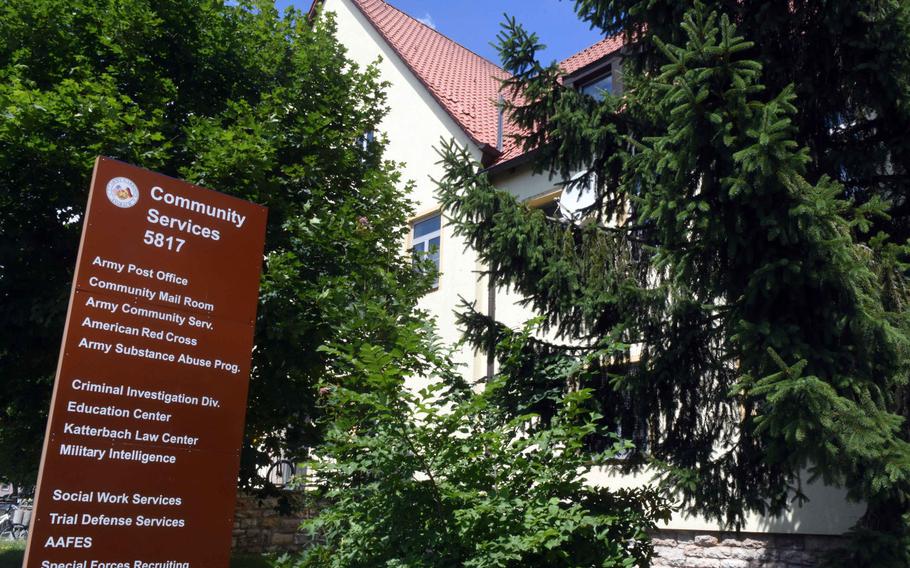 The court at Katterbach Kaserne, part of the United States Army Garrison Ansbach, Germany, July 18, 2017, where the trial of the U.S. vs Brian Johnston is taking place. (Martin Egnash/Stars and Stripes)

ANSBACH, Germany — The injuries sustained by a baby who died under his father’s care aren’t consistent with an accidental fall, a doctor said during the court-martial of a soldier on murder charges Tuesday.

Jennifer Woehlker, a German pediatrician and prosecution witness, testified at the U.S. Army Garrison Ansbach courtroom on Tuesday that she observed the baby breathing erratically and obviously injured following the incident.

Woehlker stepped down from the stand and drew a diagram showing two bruises on Lukas’ forehead, both ears and several smaller bruises on the face.

“If a child falls, they would have one bruise on one spot, if any,” Woehlker said. “I can’t see how a child could have two bruises on opposite sides of the head from a fall off an (ottoman).”

However, Woehlker’s testimony conflicted with an earlier statement, defense attorney Aaron Meyer said. Four months after the incident, Woehlker’s statement to police reported only one bruise on the baby’s forehead, among the baby’s injuries.

Woehlker said during questioning by Meyer that she may have misremembered the extent of the injuries.

The baby’s overall condition, the timing of the incident and the injuries led her to believe that abuse was probable, Woehlker said later following a question from the military jury.

A CT scan showed bleeding in Lukas’ brain and behind the eyes, which are common symptoms of shaken baby syndrome, prosecutor Capt. Alexander Hess said during opening arguments Monday.

“Bruises on the forehead and both ears. Bilateral retinal hemorrhaging. Brain trauma,” Hess said. “The evidence is going to show you that when baby Lukas sustained these injuries (he) was under the sole care of the accused, Staff. Sgt. Johnston.”

Meyer described shaken baby syndrome as a default diagnosis that parents, usually fathers, are accused of when doctors don’t know what caused an injury.

“It’s a myth,” Meyer said. “They say if you find the triad (retinal hemorrhaging, bruises and bleeding of the brain) then it’s shaken baby syndrome. You can’t do that anymore. They say because (Brian) was there, that he did it. But he didn’t beat his baby to death. The Johnstons loved their baby.”

The baby was in fragile health — diagnosed with Down syndrome, a hole in his heart, eye problems and “failure to thrive,” or grow and gain weight, Meyer said.

“Lucas was suffering from conditions, not one, but plural,” said Meyer. “When you face these factors, a fall that might not normally be severe can become severe quickly.”

“We’re going to ask you to rely on common sense, on whether a 15-inch fall off an ottoman can cause all the symptoms we’ve mentioned,” Hess said. “What caused these symptoms was the intentional use of force on the infant. Assault.”