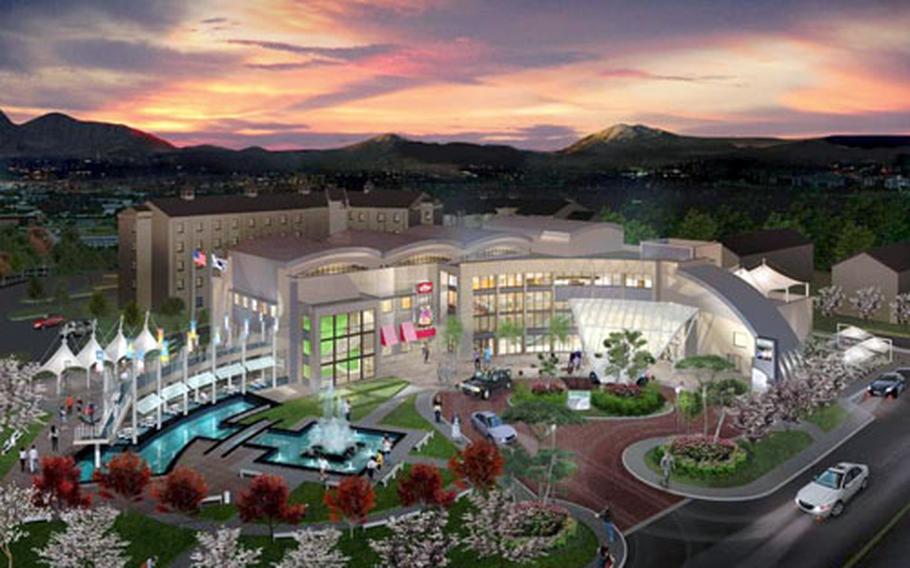 An artist’s rendering of the Food, Beverage and Entertainment Complex planned for Camp Humphreys in South Korea under a proposed master plan. (Courtesy of U.S. Army)

PYEONGTAEK, South Korea &#8212; Shops, restaurants, outdoor cafes and a new commissary and post exchange expected to be five times the size of the existing ones are among features being planned for a vastly expanded "downtown" shopping area at Camp Humphreys.

The new downtown area would leap to more than 15 times its current size, from the existing 20 acres to about 318, said Brian K. Peckins, master planning division chief for the U.S. Army Garrison Humphreys&#8217; directorate of public works.

The expansion also calls for landscaped courtyards and walkways, but with nearby parking, including an underground garage.

"Not very long ago we were a single-soldier post without a lot of family amenities and now &#8230; it&#8217;s just transforming tremendously," Peckins said. "The downtown area will give soldiers and families a home-away-from-home feel."

A two-story food, beverage and entertainment center with a glass fa&#231;ade will stand near the pedestrian-only plaza that will house a variety of restaurants where troops and families can dine and otherwise socialize, he said. It would also have an outdoor fountain and amphitheater, and a new movie theater will sit at one edge of the plaza.

Peckins said a final version of the post&#8217;s transformation plan is to be submitted later next month to U.S. Forces Korea and South Korea&#8217;s defense ministry. Both must approve before projects can proceed.

"Just a beautiful facility," Peckins said. "It&#8217;ll certainly be much nicer than anything we have on existing Humphreys and I think you&#8217;ll actually draw people from Osan and Yongsan once this is built," he said in reference to two other major U.S. military installations on the peninsula.

"Everything is bigger and better than what we&#8217;ve got now," Peckins said.

Camp Humphreys is in the process of tripling in size to eventually become the U.S. military&#8217;s flagship installation on the peninsula under a South Korea-U.S. Agreement. The bulk of U.S. forces, including those now in and north of Seoul, are to relocate to Humphreys by 2012.

Aside from the construction of a new plaza, other Camp Humphreys "downtown" facilities would include a new: