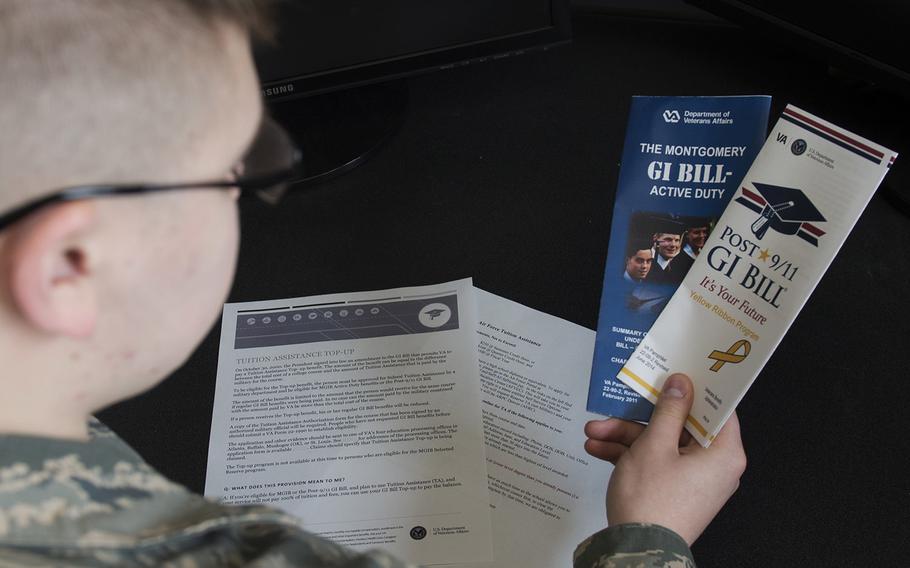 WASHINGTON – Congress is in the early stages of considering a mandate for servicemembers to pay into the GI Bill – a proposal that has drawn sharp criticism from one veterans organization, while another argues it would improve and protect the education benefit for the long haul.

The House Committee on Veterans’ Affairs gave veterans groups a draft last week of legislation that would deduct $100 from servicemembers’ basic pay each month for two years, for a total of $2,400, in order for them to receive education benefits. The Post-9/11 GI Bill created in 2009 doesn’t require servicemembers to pay into it, but an earlier version of the benefit – the Montgomery GI Bill – mandated recipients to pay $100 per month for one year.

Veterans of Foreign Wars issued a statement Tuesday, calling the proposed $2,400 buy-in a “tax on troops” that VA committee leadership was attempting to pass quickly and quietly, without allowing opposition the chance to speak up.

“The Post-9/11 GI Bill was implemented as a high-five, a wartime benefit. It was a, ‘Thanks for taking the oath of enlistment while at wartime’,” said Kayda Keleher, a VFW legislative associate. “The VFW… will not stand idly by as Congress continues adding on mandatory pay-in requirements of our troops, let alone while we are still at war.”

Hubbard said the buy-in would provide an estimated $330 million each year, which would bankroll an expansion to veterans’ education benefits. Some of the improvements SVA, which says it supports more than 500,000 student veterans, are seeking include more money for veterans pursuing Science, Technology, Engineering and Mathematics degrees, increased benefits for survivors and dependents, providing more benefits for reservists and doing away with a requirement that veterans use their benefits within 15 years after their military service.

“What we are seeking and continue to push for is a consolidated, streamlined GI Bill program – a lifetime GI Bill,” Hubbard said. “In doing so, we were able to identify a long list of features that the larger veteran population has been fighting for, for a long time. This is the way to do that. It’s arguably the most significant proposal on education legislation in the last 10 years or so.”

Tiffany Haverly, communications director for Rep. Phil Roe, R-Tenn., chairman of the House Committee on Veterans’ Affairs, said the committee has worked with veterans organizations during the last several months to work on possible improvements to the GI Bill.

On April 26, the veterans subcommittee on economic opportunity will hold a legislative hearing on the proposal, which Roe is submitting, as well as other possible changes to the GI Bill. Haverly said it would “bring these ideas, and how to pay for them, forward for further debate.”

“The chairman is dedicated to debating these proposed reforms through an open, transparent and inclusive process,” she said. “The feedback received from witnesses and the will of the committee members will decide whether all, some or none of the proposals under consideration advance through the committee.”

EDITOR'S NOTE: The House Committee on Veterans’ Affairs postponed on Friday a hearing planned for April 26 to discuss proposed changes to the GI Bill, including the idea of troops paying to receive the education benefit. Committee staff did not say when the hearing would be rescheduled. Keleher conceded the veterans community has long sought improvements to the GI Bill – and money to fund them — but contended “right now is just not the time” to reduce servicemembers’ pay to fund it.

“Everybody absolutely wants to make improvements to the GI Bill, and everything costs money – there’s no getting around that. It’s constantly been a fight of, ‘Where’s the money,’” Keleher said. “This would be something that can pay for some improvements, but we’re looking at this as digressing.”

The VFW, which has 1.7 million members, put out the call Tuesday urging Congress against the change. VFW National Commander Brian Duffy said it was “absurd” and was essentially “nickeling and diming America’s servicemembers.”

Hubbard, who serves in the Marine Corps Reserve, argued post-9/11 veterans would be willing to pay for an expanded GI Bill.

“They see and know the investment,” he said. “This newer generation of veterans is, by and large, willing to give a little to get a lot.”

However, Iraq and Afghanistan Veterans of America, which has 183,000 members, called the proposal “political cowardice” and “bad for recruiting and morale.”

“We welcome efforts to make the benefit stronger and more flexible,” Paul Rieckhoff, founder of IAVA, said Tuesday in a statement. “However, IAVA will vigorously oppose any and all attempts to impose a registration tax on this essential benefit.”

A draft of the legislation states the buy-in provision would go into effect one year after the bill is enacted and would apply to servicemembers who enlist on or after that date. Hubbard said it’s estimated to provide $3 billion over 10 years, about enough to pay only for the improvements.

There are long-held fears in the veterans community that Congress will eventually cut funding to veterans’ education benefits. The buy-in would offer some protection against any future reductions, Hubbard said.

“There are budget pressures on the Hill and the post-9/11 GI Bill is a significant cost,” he said. “We’d like to keep this benefit around, ideally as long as possible if not forever. We realized building in this investment that servicemembers would be making, it makes it more difficult to get rid of the program. We’d have a buffer against any potential cuts.”