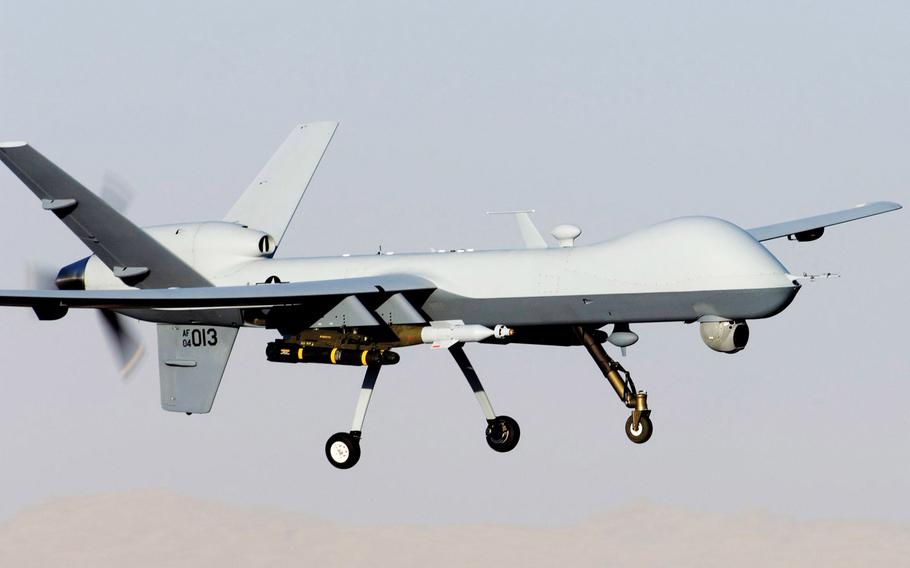 STUTTGART, Germany — The Trump administration reportedly wants to loosen the criteria for carrying out airstrikes, a move that could open the door to conducting new drone attacks in parts of Africa and other nations.

President Donald Trump has been presented with a proposal to relax key airstrike rules and was expected to approve the measures, the New York Times reported Friday, citing unnamed officials.

If implemented, the plan could have significant implications for the Stuttgart-based U.S. Africa Command, which now routinely conducts airstrikes against the al-Shabab group in Somalia, but also is trying to counter extremists in other parts of the continent.

To date, counterextremist efforts in Africa have centered on attempts to bolster indigenous forces leading the fight against groups, such as Boko Haram and al-Qaida affiliates in Western Africa. Any extension of airstrikes to other parts of Africa would serve as a dramatic departure for AFRICOM.

The proposed changes would allow the military and CIA to kill targets beyond senior militants that pose an immediate threat. That means regular foot soldiers could now be targeted. Also, those strike decisions would not need “high-level vetting,” the Times reported.

“But administration officials have also agreed that they should keep in place one important constraint for such attacks: a requirement of ‘near certainty’ that no civilian bystanders will be killed,” the Times said.

In the case of attacks and raids on new countries, commanders would still need higher-level approval, the Times reported.

For now, the command’s airstrike campaign is largely restricted to Somalia and the occasional attack against Islamic State militants in Libya.

Africa is home to a mix of al-Qaida affiliates and insurgencies that are among the world’s most lethal, most notably the Nigerian-based Boko Haram, which also carries out attacks in neighboring countries. Al-Qaida in the Islamic Maghreb, an al-Qaida offshoot, has been less of a focal point in recent years but still poses a threat in Mali and the loosely governed pockets of the Sahel region.

AFRICOM hasn’t publicly indicated an interest in conducting attacks of its own in Western Africa, but the military does maintain drone bases in Cameroon and Niger where unarmed surveillance operations could be expanded if agreements are reached with host nations.

But any attempt to expand the range of targets, such as Boko Haram, would require backing from Nigeria, home to Africa’s largest population and economy.

The Philippines, which also faces an insurgency and has a growing Islamic State group presence, also could be a new potential venue for airstrikes, assuming Manila was on board.

Trump has repeatedly emphasized his desire to strike at militant groups, rather than “whole of government” approaches that focus on issues such as promoting good governance in states where extremists tend to flourish.

“The United States and our allies are working together throughout the Middle East to crush the loser terrorists and stop the reemergence of safe havens they use to launch attacks on all of our people,” Trump said during his speech at the United Nations Tuesday.