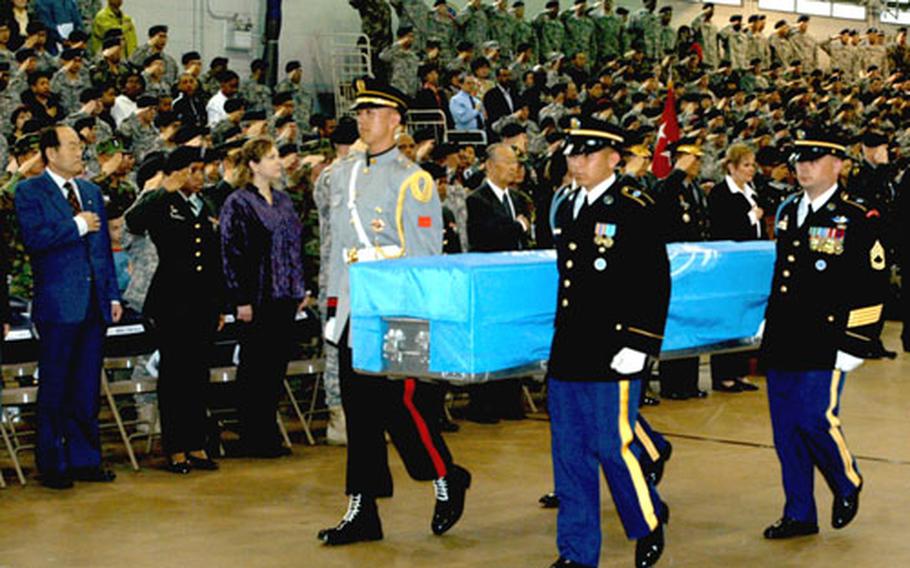 The remains were brought to the Collier Field House on Yongsan for a 45-minute ceremony presided over by Gen. B.B. Bell, who heads the UNC, U.S. Forces Korea and the Combined Forces Command.

&#8220;The word &#8216;repatriate&#8217; &#8212; to return to one&#8217;s own country &#8212; has a very special meaning for American servicemembers, who today often spend many years overseas separated from their families,&#8221; Bell said. &#8220;They have been promised that should they lose their lives in a foreign land, we will honor their sacrifice, keep faith with their fellow warriors and families and bring them home. This morning, for these warriors, we are keeping that promise.&#8221;

Following Bell&#8217;s remarks, the Honor Guard carried the coffins outside the gym and loaded them onto hearses.

The next stop is Hawaii, where forensic scientists will attempt to determine the identities of the servicemembers so the remains can be returned to the proper governments or family members.

&#8220;However forensic determines their nation of origin &#8212; the United States, Korea or other United Nations contributing nations &#8212; these servicemembers were great patriots,&#8221; Bell said.