Projects sprucing up air base in Kyrgyzstan 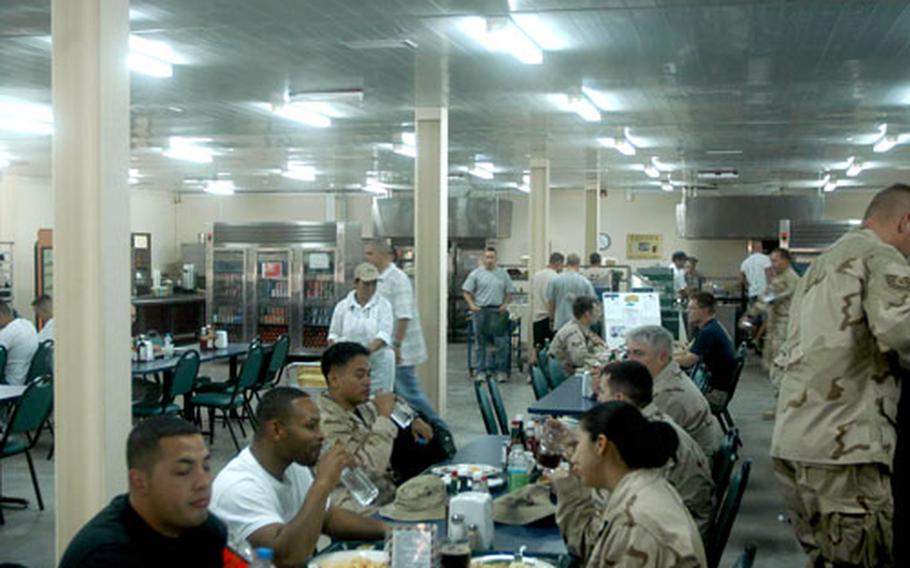 The dining facility at Manas Air Base in Kyrgyzstan opened in May, replacing a tent complex. Now, hundreds of servicemembers can eat together during one of four designated meal times or grab a more basic meal around the clock. (Kent Harris / S&S)

The dining facility at Manas Air Base in Kyrgyzstan opened in May, replacing a tent complex. Now, hundreds of servicemembers can eat together during one of four designated meal times or grab a more basic meal around the clock. (Kent Harris / S&S) 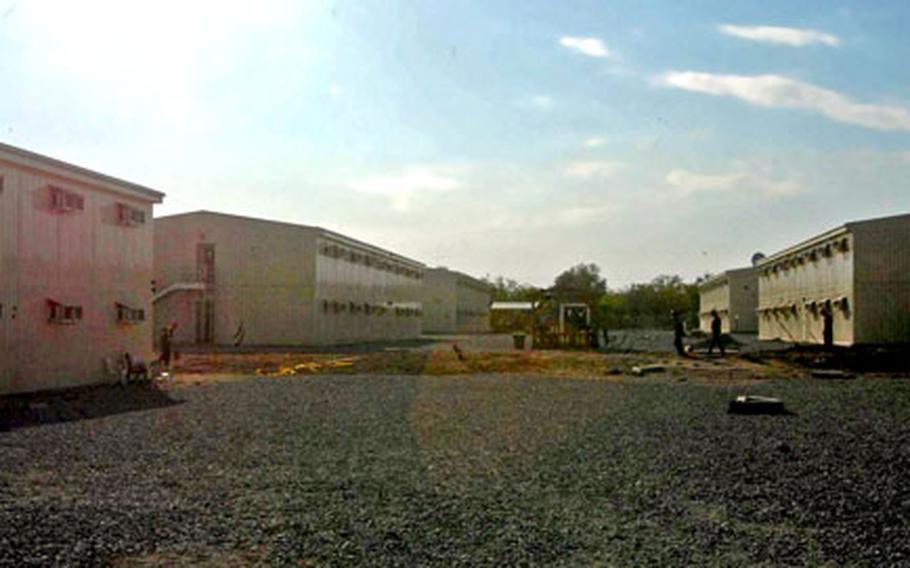 Servicemembers stationed at Manas Air Base in Kyrgyzstan are gradually moving into new living spaces. When construction on the metal buildings is finished, all those assigned to the base should be out of tents. (Kent Harris / S&S)

MANAS AIR BASE, Kyrgyzstan &#8212; It might just be a way station for many servicemembers and civilians passing in and out of Afghanistan.

But for about 1,200 servicemembers, this air base more than 500 miles north of Kabul located in a former Soviet republic is home. At least for the four months or so that most Air Force personnel serve in theater.

And a series of projects on the small compound are sprucing up the neighborhood, both for those staying on base and those just passing through. The dining facility moved to a prefabricated building in May, moving up from a series of tents that now house transient residents. Next door, a similar metal structure is home for the base exchange. AAFES team leader Andre Nourie came downrange from Vicenza, Italy, and heads an exchange open from 10 a.m. to 8 p.m. seven days a week.

Those hours pale in comparison to the dining facility, though.

The dining facility is open at all hours to accommodate the 7,600 passengers a month &#8212; more than 200 a day on average &#8212; that spend time on the base while waiting for connecting flights in and out of Afghanistan.

The base also handles about 4,500 tons of cargo a month and dispenses about 4.6 million gallons of fuel.

Across the street from the dining facility and exchange is a large festival tent that serves as a popular night spot. Pete&#8217;s Place has seats for about 300 people to watch televisions or movies on a huge screen. But its biggest attraction is beer. Those bearing military ID cards are allowed two drinks a night or a total of four in a week.

Senior Airman Kaalup Edwards said there&#8217;s a tournament set for just about every kind of activity that can be played. And there&#8217;s more than just bragging rights at stake for those stationed there or passing through: Prizes range from $25 to $300.

Winners based at Manas can take that cash and stuff it under a real mattress in the newly opened prefabricated housing units. Master Sgt. Rhongea Nixon, deployed from Ramstein Air Base in Germany, said 13 units &#8212; with 52 rooms each &#8212; are complete and seven more will be built. Senior officers and enlisted personnel will get their own rooms and there might be space left over for some transient personnel as well.

Facilities in tents that cater largely to the transient population &#8212; such as personnel, lodging and passenger booking &#8212; are gradually being moved to new locations as well.