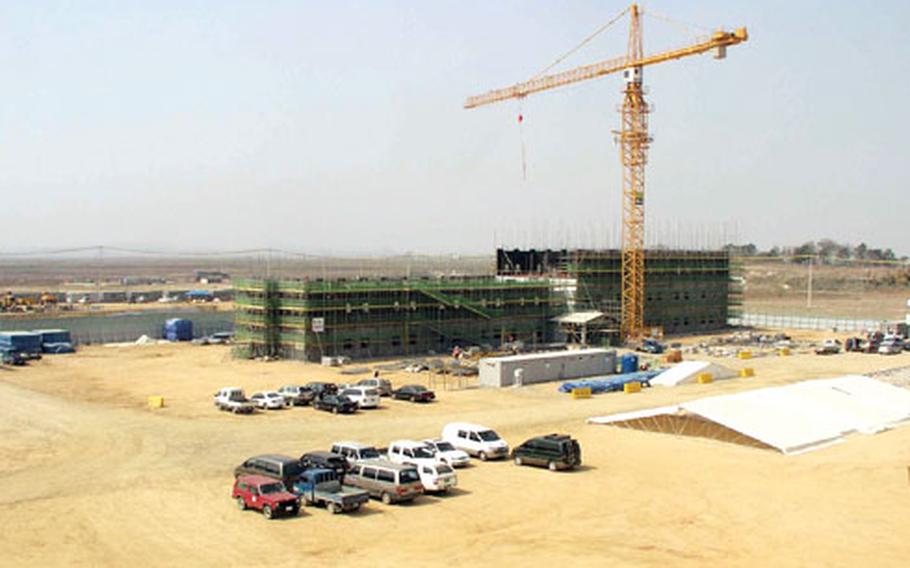 Besides barracks, family housing, and aircraft and vehicle maintenance facilities, work also will include putting in landfill and roads, as well as water, sewer, gas and electric lines. The utilities project alone comes in at nearly half a billion dollars, officials said.

Camp Humphreys is being transformed into the U.S. military&#8217;s flagship post on the peninsula. It eventually will be home to the bulk of U.S. forces in South Korea, including those currently in and north of Seoul, possibly by 2016.

"This is truly our step into the future," said Bob McElroy, spokesman for the U.S. Army Garrison-Humphreys.

Some of the work is or will be under way on a vast tract of former farm land earmarked for the Humphreys expansion; other projects are scheduled for the existing post, said Fred Davis, Army Relocation Program manager with the U.S. Army Corps of Engineers&#8217; Far East District.

Already going up are six barracks on what planners call Parcel 1 of the expansion land.

The $480 million infrastructure project for both the existing post and the expansion land will include gas, power, water and sewer lines; drainage; power stations; water and sewer treatment plants; perimeter fencing and lighting; traffic lights and street lights; and new sidewalks, bike lanes, jogging trails and road corridors, landfill, and other work.

"This is everything," Reiff said. "It&#8217;s the first really big step forward on the relocation program because of the size and magnitude of the contract. And it&#8217;s kind of the forerunner for everything else, because it sets the groundwork for all the future construction."

Work on the four-year utilities project will start in May.

Related road work and other activity will mean occasional traffic disruptions and outages, but officials said they will notify the community ahead of time.

"Our intent is to minimize that impact as much as possible, but there will be disruptions," Reiff said.

Camp Humphreys projectsConstruction of six barracks on land earmarked for the Humphreys expansion.

A sweeping $480 million project to put in landfill, roads, utilities and other new infrastructure on both the existing installation and the expansion land.

Three, 12-story family housing apartment towers on the expansion land. The project will cost about $100 million. No start date is set yet, but it could begin this summer or fall.

A 2,400-unit family housing project of high- and low-rise apartment buildings, to be funded and built by a private consortium on the expansion land at a cost of about $1.3 billion. Work is to start this fall. The first phase will produce a set of buildings with space for 1,400 families. A second phase will house 1,000 families.