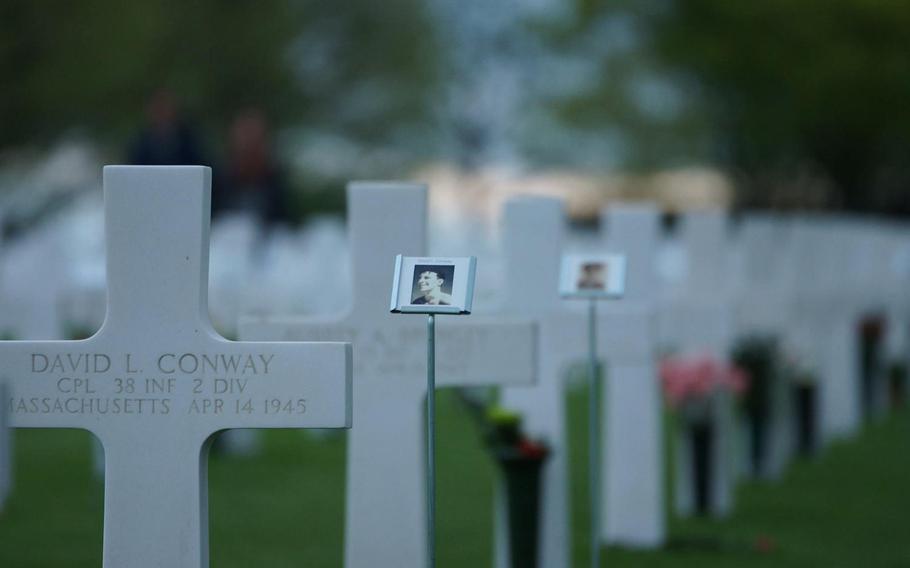 Graves of U.S. servicemembers at the Netherlands American Cemetery in Margraten, along with photos of the deceased, during the "Faces of Margraten" tribute in May 2015. A volunteer group has found photos of nearly half of the 8,300 soldiers interred here. (Joost Claassens/Courtesy Faces of Margraten)

Graves of U.S. servicemembers at the Netherlands American Cemetery in Margraten, along with photos of the deceased, during the "Faces of Margraten" tribute in May 2015. A volunteer group has found photos of nearly half of the 8,300 soldiers interred here. (Joost Claassens/Courtesy Faces of Margraten) 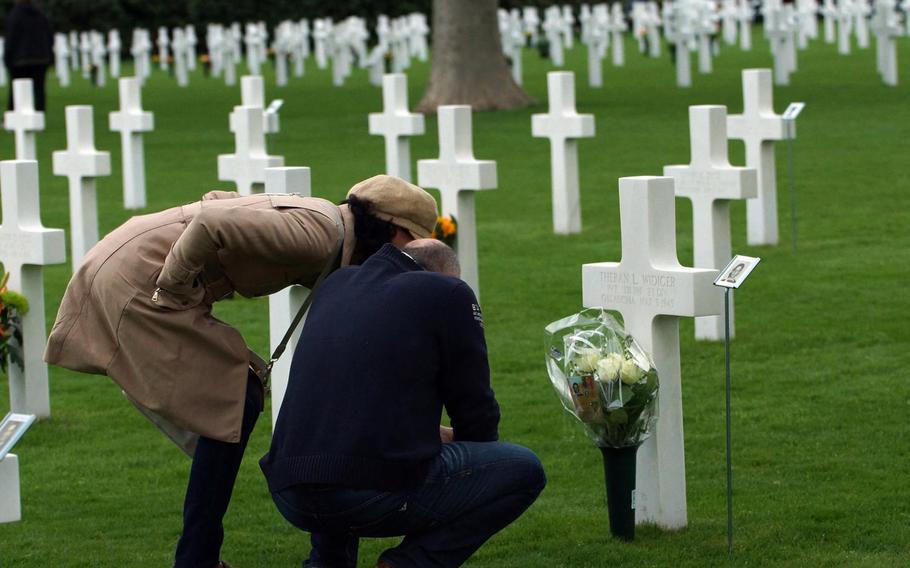 A man and woman pay tribute to a U.S. soldier buried in the Netherlands American Cemetery in Margraten during a tribute in May 2015. The "Faces of Margraten" project, launched last year, enabled adopters of graves to see some of the faces of those interred there. (Joost Claassens/Courtesy Faces of Margraten)

For years, thousands of Dutch families have been tending the graves of American World War II servicemembers as a gesture of gratitude. Last year, they finally were able to see the faces of many of their liberators.

Thanks to volunteers at the “Faces of Margraten” project, more than 3,300 photos of servicemembers buried or listed on Tablets of the Missing at the Netherlands American Cemetery at Margraten, were put on display last year during a four-day tribute. The project, sponsored by the Foundation United Adopters American War Graves, continues to grow and about 4,000 photos will be on display next to the graves at this year’s tribute May 1-5.

There are 8,301 graves at the cemetery and 1,722 names of servicemembers who were missing in action.

“When we talk about war, we often talk about abstract numbers,” said Sebastiaan Vonk, the 23-year-old chairman of the foundation. “What we are trying to do here is to show that these were all individuals who fought in a war and died in a war, and there’s no better way than putting those photos out and showing that they were an individual like you or me.”

“Often we have relatives in the photos — the wife, the children, parents, brothers,” Vonk said. “So we really see the people that are buried here in the cemetery are just ordinary people who lived in extraordinary times.”

Teresa Hirsch, a retiree from Indianapolis and one of the group’s volunteer researchers in the U.S., said she learned about the project last year through social media.

“It can be long and tedious, but rewarding, knowing you’re providing a face to the person who has adopted the grave,” she said, referring to the Dutch who tend the graves.

At the inaugural tribute last year, Hirsch — a self-proclaimed “military groupie” who became interested in the war after attending the 60th anniversary of D-Day in 2004 — said she understood the power of the photos when she spoke with a Dutch man who has been caring for a grave for years.

“He was really emotional,” Hirsch said. The man had been tending the grave for 15 years but didn’t know what the man buried there looked like. “And now, here was this picture that somebody, somewhere, somehow found and sent to the project.”

“Thinking about that just keeps me going and doing this,” Hirsch said.

The group is accepting photo submissions through April 18, Vonk said. Anyone who has photos of a soldier buried in the cemetery or listed as missing can submit them through the project’s website,thefacesofmargraten.com. To search for names of those interred or listed at the Margraten cemetery, go to the American Battle Monuments Commission website: abmc.gov/database-search.

“It’s important to us that we are able to reach the families of these soldiers because they are the ones who have the information and photos tucked away at home.”