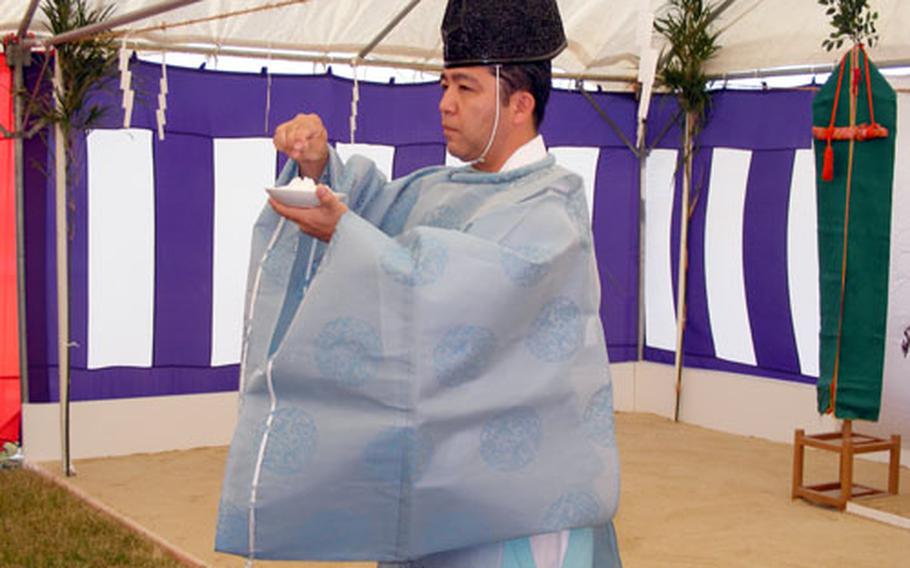 Akira Taba, a Shinto priest, conducts a blessing Wednesday at the site of what will be a 43,000-square-foot consolidated enlisted club on Camp Foster. The salt symbolizes the purification of the construction site. (David Allen / S&S)

CAMP FOSTER, Okinawa &#8212; With the blessings of a Shinto priest, ground was broken here Wednesday for a new consolidated enlisted club.

The traditional Japanese ceremony blessed the project, asking for the safety of the workers during construction and praying for the long life of the building and its occupants.

The new club will feature 43,000 square feet of space for a large kitchen and service area, a family dining room, banquet rooms, a 165-machine gaming area and separate enlisted and Staff NCO lounges. It is scheduled to open in late 2009.

According to MCCS Marketing, the new club will &#8220;open a new chapter in the future of Camp Foster&#8217;s ability to provide world-class facilities to the military community.&#8221;

It will replace the existing Globe and Anchor Enlisted Club, which was built in 1956, and Chesty&#8217;s Staff NCO Club, which dates back to 1961 and was razed earlier this year to make way for the new facility.

The Army Corps of Engineers is managing the project with the Kyushu branch of the Takenaka Corp. as the prime contractor. Their representatives also took part in the 35-minute groundbreaking ceremony. Planning for the consolidated club complex began in 2003.

In Japan, construction projects are often kicked off by the Shinto ceremony known as Jichinsai. It is a ritual for prayers by the owner, architects and builder to the deity of architecture and carpentry.