Project aims to connect with troops through tales of ancient warriors 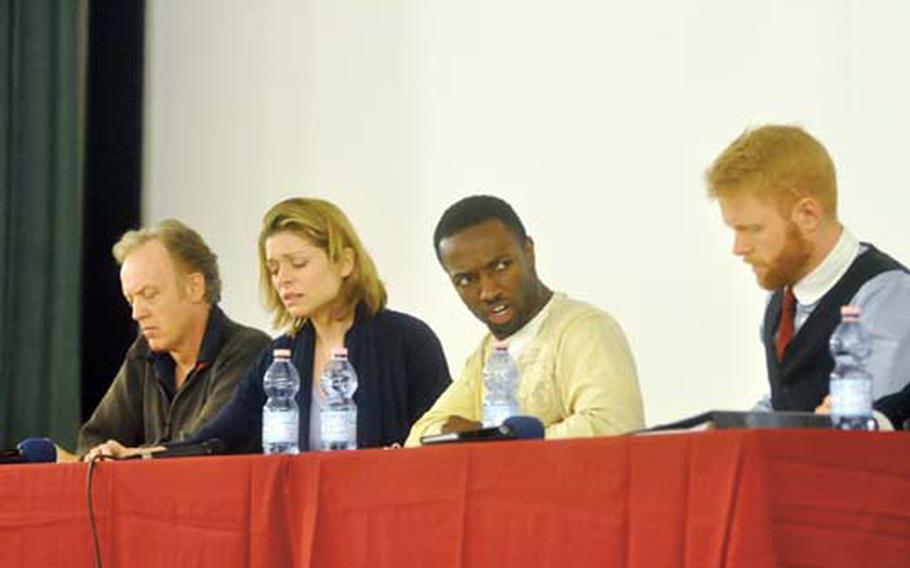 From left, actors Reed Birney, Gretchen Egolf, Jamie Hector and Brendan Griffin perform readings of “Ajax” and “Philoctetes” as part of the Theater of War project, which is staging readings at 10 garrisons throughout Germany this month. (Seth Robbins/S&S)

BAUMHOLDER, Germany - More than two millennia ago, the Greek dramatist Sophocles wrote of warriors scarred by battle: Ajax, so consumed by rage that he turns it on himself, and Philoctetes, maddened by isolation after being deserted by his fellow officers.

The Theater of War project has revived these ancient warriors for today&rsquo;s troops, staging readings of "Ajax" and "Philoctetes" at more than 75 U.S. military sites. The plays, which place the two title characters in the battles and bloodlettings of the mythic Trojan War, were chosen as a way to remind modern troops that their experiences are not new.

Sophocles had served as a commander of the armed forces, and possibly as a general in a campaign in the Samian war, which pitted Athens against the island of Samos. His plays, written at a time of constant warfare, were likely to have been seen by many with combat experience.

Though the works are rarely produced for today&rsquo;s audiences because of their difficulty, Theater of War director Bryan Doerries said the troops relate to them instantly.

"Classicists and academics have called these &lsquo;problem plays,&rsquo; " he said. "But as we&rsquo;ve done this, we&rsquo;ve learned that there is no problem at all for those who have experienced war to understand them."

The Brooklyn-based theater project, funded by a grant from the Pentagon, is now performing 18 shows at 10 garrisons throughout Germany.

On Thursday, soldiers from Baumholder&rsquo;s 170th Brigade Combat Team listened raptly to portions of the two plays read by actors Reed Birney, Gretchen Egolf, Brendan Griffin and Jamie Hector, many whom were recognizable from film roles such as "The Talented Mr. Ripley" and from TV series such as "The Wire," "Gossip Girl" and "Generation Kill."

As Ajax, Hector launches into a plot to kill Odysseus and his fellow Greek generals after they refused to grant Ajax the armor of Achilles, disgracing him. Placed in a trance by the goddess Athena, Ajax slaughters a heard of cattle and goats he thinks are the officers. Rather than soothe him, the slaughter only further stokes his rage.

Hector, who played drug dealer Marlo Stanfield on HBO&rsquo;s "The Wire," let his voice drop to a growl as Ajax threatens to lash the back of his enemy Odysseus "until it&rsquo;s red with blood."

After the slaughter of the cattle, Ajax&rsquo;s wife, Tecmessa, recognizes that Ajax has changed. He sits "shell-shocked in his tent," she tells the chorus, "glazed over, gazing into oblivion. He has the thousand-yard stare." Tecmessa implores Ajax to stop his madness and come back to his loved ones. But her pleas are not enough, and he ends up impaling himself on his sword.

Egolf, who plays Tecmessa, said that military wives often relate to her character. "I think of them when I&rsquo;m doing it," she said.

A veteran of two tours in Iraq, Spc. Gregory Downs, of the 40th Engineer Battalion, said he empathized with Ajax&rsquo;s despair after Odysseus and the generals refused to honor him. "Sometimes all we want is something as small as recognition," Downs said. "Ajax did everything he could to be loyal to both his comrades and superiors, but in the end he thought it was all for nothing."

While "Ajax" ends in tragedy, "Philoctetes" offers some hope, albeit after no small amount of misery. The title character is bitten by a snake and then left wounded on an island by his comrades. He bears the physical and emotional pain for nine long years, until a young officer finds him, freeing him from his isolation.

Spc. Anthony Ducharme, of Headquarters and Headquarters Company, 40th Engineer Battalion, said the wounded Philoctetes&rsquo; guttural screams, rendered by Birney, reminded him of a friend who was killed in a rollover crash in Iraq.

"There is a lot of pain in the Army," he said, "not seeing family. You&rsquo;re friends get killed. War is madness."