Progress warms heart of sailor back in native S. Korea for exercise 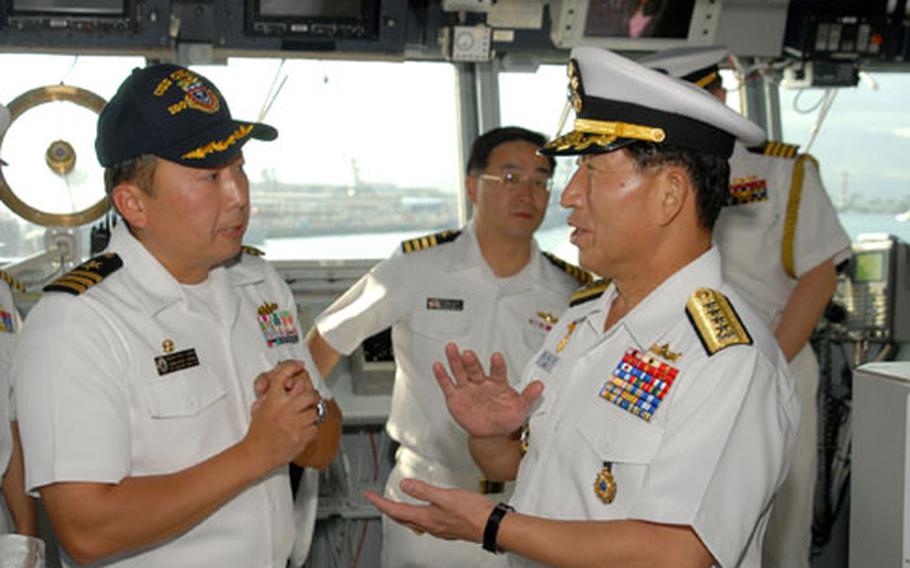 When U.S. Navy Cmdr. Heedong Choi left South Korea as an infant, the nation was still struggling to rise out of poverty.

With those riches has come a modern navy that has rapidly progressed toward becoming a blue-water force.

"It warms my heart. To see the country go from being a coastal force to developing this much is really eye-watering," said Choi, who as commander of the USS Chafee will work alongside his South Korean navy counterparts during the annual Key Resolve/Foal Eagle joint exercise through March 20.

Sailors from the Hawaii-based Chafee will support the U.S. 7th Fleet and review operational plans with the South Korean navy, Choi said.

The ship also will be involved in helicopter control, integrating with land forces and participating in search-and-seizure operations during the exercise, Choi said.

Choi is one of several U.S. sailors who were born in South Korea and are now returning to participate in the exercise.

Petty Officer 3rd Class Kevin Shin, also of the Chafee, will spend his 30th birthday with friends and family during the visit.

Seaman Hang Jong-oh, 24, of the USS Stethem, also will reunite with his family.

Although Choi was born in Incheon, he also considers himself a native of Glenview, Ill. He spent his early childhood in the United States.

At age 8, his father moved the family back to South Korea to work as a missionary, leaving Choi to become acquainted with a homeland that wasn&#8217;t quite like home.

"This was the land of rice and kimchee, and I was looking for the land of burgers and pizza," Choi said.

Choi&#8217;s family returned to the States when he was 16. He went on to the University of Illinois and was commissioned through ROTC in 1990.

During his first assignment aboard the Yokosuka, Japan-based USS Fife, Choi returned to South Korea during a port visit.

The massive economic development was apparent enough. But little things like a woman being able to smoke in public made an impression as well.

"The transformation from back then in 10 years&#8217; time was absolutely amazing," Choi said. "There was vibrancy to the country and the people were adapting to Western culture. There were freedoms that didn&#8217;t quite exist during Park Chung-hee regime."

Park&#8217;s regime certainly didn&#8217;t include the right to political protest, which is now a common part of South Korean civic life on topics ranging from free trade and farming to relations with its Asian neighbors and the United States.

Choi acknowledges some of the protests against the South Korea-U.S. alliance.

He then points to the vast numbers of South Korean parents hoping their children can study at a U.S. college. He also talks about the friends he&#8217;s made in South Korea and their belief that the alliance has played a key part in the nation&#8217;s rise on the world stage.

"Deep down inside Korean hearts, they know the U.S is a good guy," Choi said.