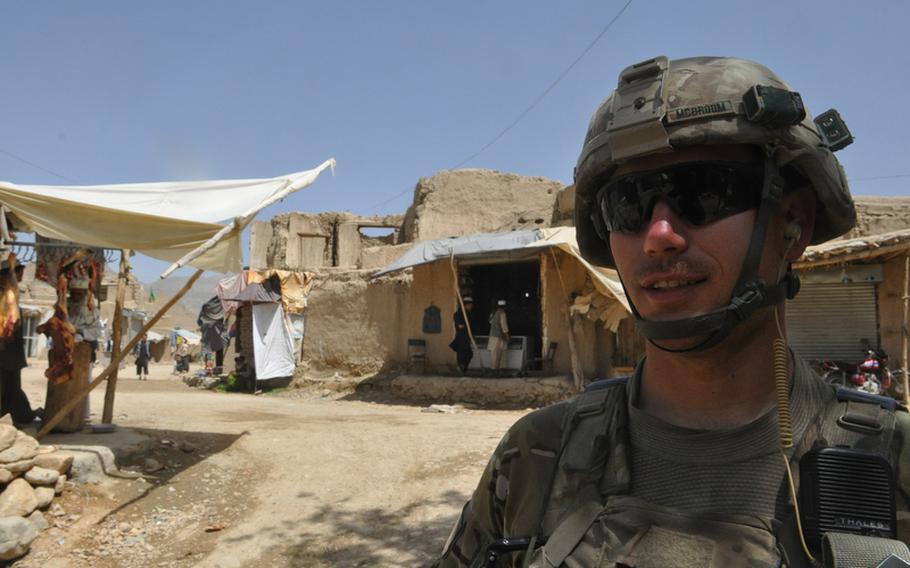 Buy Photo
''This was no man's land two, three months ago,'' said 1st Lt. Cody McBroom while on patrol in the Charkh District bazaar in late May. ''You were guaranteed to get shot at.'' (Martin Kuz/Stars and Stripes)

Buy Photo
''This was no man's land two, three months ago,'' said 1st Lt. Cody McBroom while on patrol in the Charkh District bazaar in late May. ''You were guaranteed to get shot at.'' (Martin Kuz/Stars and Stripes) 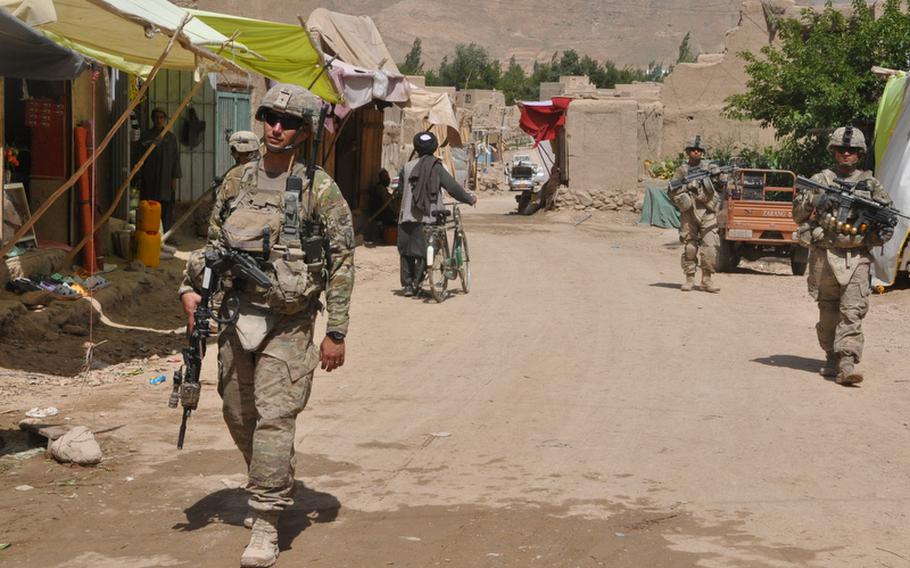 Buy Photo
First Lt. Cody McBroom, left, and members of his platoon with the 2nd Battalion, 30th Infantry Regiment, 4th Brigade Combat Team of the 10th Mountain Division, on patrol in the Charkh District bazaar in late May. (Martin Kuz/Stars and Stripes) 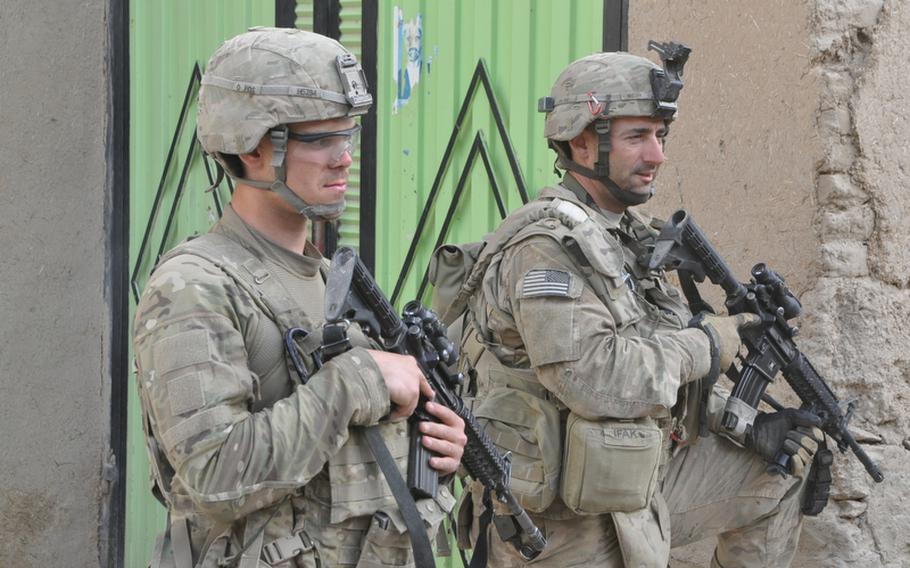 Buy Photo
Spc. Justin Hickey, left, and Pvt. Brad Hampton stand guard in late May in an alley that is the site of occasional insurgent ambushes in the Charkh District of Logar province. (Martin Kuz/Stars and Stripes) 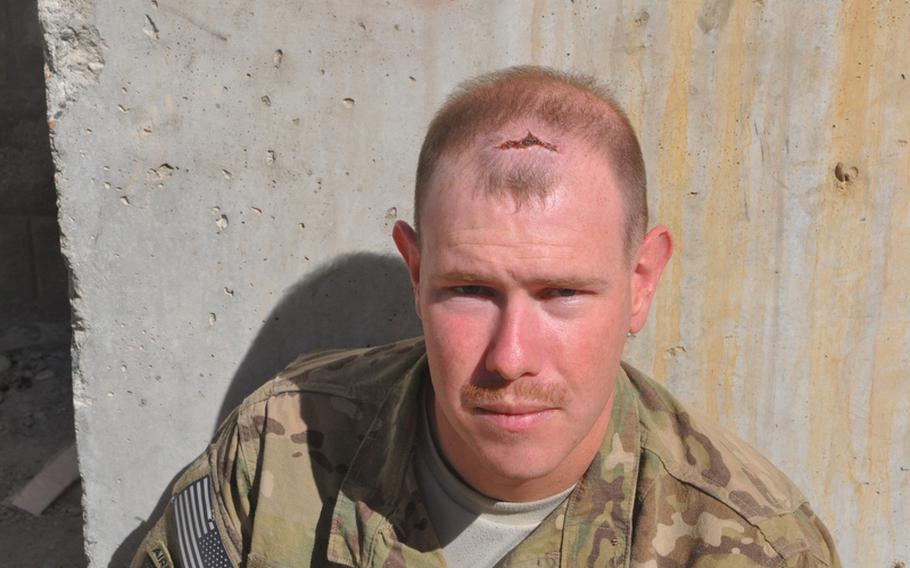 Buy Photo
Spc. Stephen Judd suffered shrapnel wounds to his head, neck and chest when a mortar struck Combat Outpost Charkh in early May. Judd, who earned a Purple Heart, returned to the outpost less than two weeks later. (Martin Kuz/Stars and Stripes) 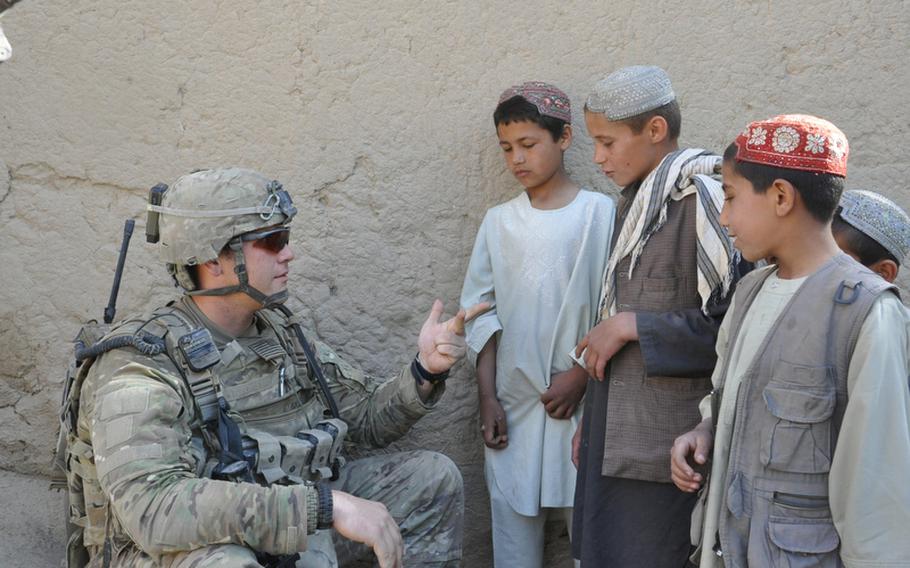 Buy Photo
Sgt. Robert Stewart plays a counting game with Afghan children while on patrol in the Charkh district of Logar province in late May. (Martin Kuz/Stars and Stripes) 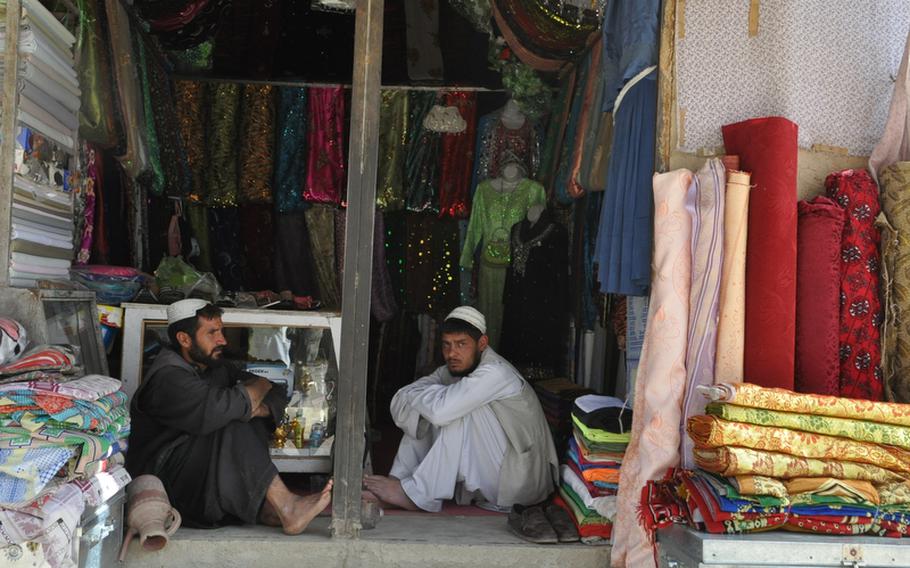 Buy Photo
In recent months, shop vendors in the Charkh district bazaar have shown a greater willingness to tip off coalition forces to the whereabouts of suspected insurgents. (Martin Kuz/Stars and Stripes) 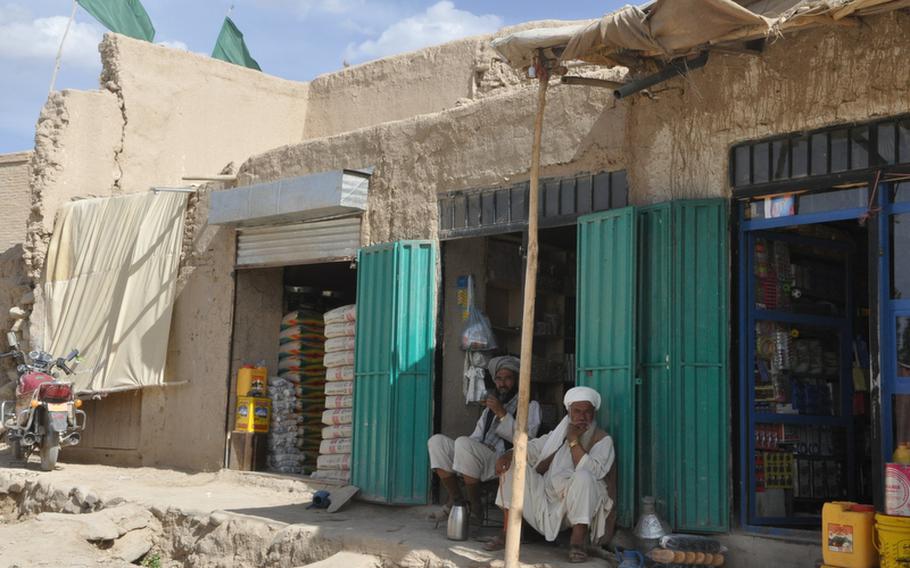 Buy Photo
Dozens of small shops make up the Charkh district bazaar, where coalition forces have largely succeeded in driving out insurgents and brought a semblance of stability to the area. (Martin Kuz/Stars and Stripes) 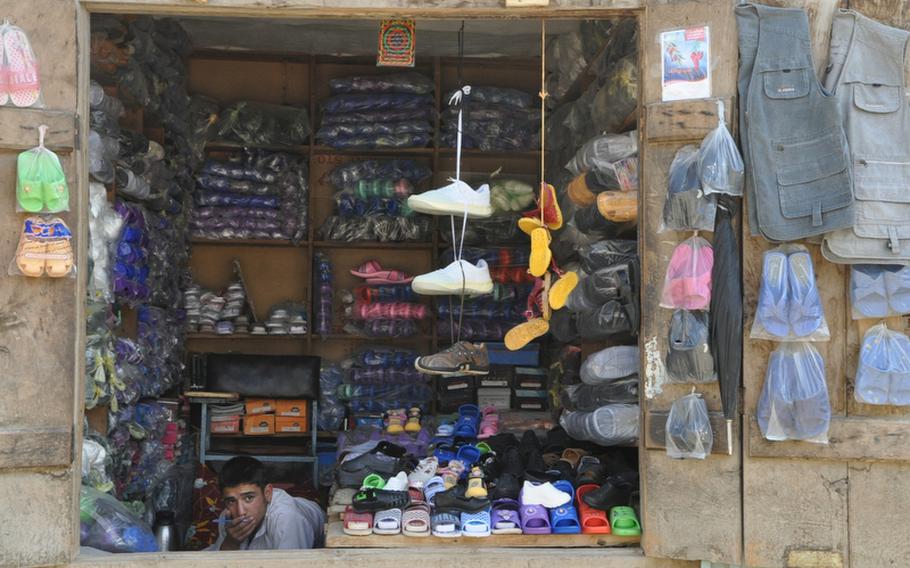 Buy Photo
Before wresting control of the Charkh district bazaar a few months ago, coalition soldiers would brace for an insurgent attack when they saw vendors closing up their shops. (Martin Kuz/Stars and Stripes)

CHARKH, Afghanistan &mdash; A platoon of U.S. soldiers walked along a dirt path mottled with sheep droppings, moving past fruit orchards and muddy streams under a warm morning sun. Gunfire, mortar explosions and the other noises of war were nowhere to be heard.

&ldquo;When we first got here, we wouldn&rsquo;t have been able to do this,&rdquo; said 1st Lt. Paul Lankford, the platoon&rsquo;s leader. &ldquo;We would have taken contact as soon we started the patrol. We&rsquo;ve come a long way.&rdquo;

Company B of the 2nd Battalion, 30th Infantry Regiment, 4th Brigade of the 10th Mountain Division deployed to the Charkh district of southern Logar province in October. A vast quilt of villages covers this dun-colored mountain valley in eastern Afghanistan, an expanse 7,000 feet above sea level with a rugged beauty that resembles the southwestern United States.

Yet, despite its elevation and natural splendor, the area bears the reputation as &ldquo;the hellhole of Logar.&rdquo; The moniker reflects the violence that has riven Charkh since U.S. troops arrived in 2009 to stymie the flow of insurgents to Kabul, 50 miles to the north. In the last eight months, few regions of Afghanistan have seen more upheaval.

Fighting escalated after Company B took up residence in a combat outpost a half-mile from the district&rsquo;s central bazaar and began patrolling the four-block stretch of shops. U.S. and Afghanistan soldiers withstood multiple attacks almost every day for weeks, exposed to small-weapons fire, rocket-propelled grenades and homemade explosives.

Before wresting control of the marketplace, troops would brace for an ambush when they saw vendors &mdash; apparently tipped off by insurgents &mdash; yanking down the corrugated metal doors fronting their shops. The staccato clack-clack served as a prelude to the harsher syncopation of automatic rifle fire.

Late last year, soldiers drove enemy fighters from the bazaar to the opposite bank of a narrow river that bisects Charkh. Earlier this spring, taking heavy fire and answering in kind, troops surged over the concrete footbridge that links the two sides.

&ldquo;I slipped and fell on the brass,&rdquo; said Pvt. Brad Hampton, referring to the bullet casings that had coated the bridge. &ldquo;Before I could stand up, I heard one round hit the hand railing to my right and another hit the ground about three feet away.&rdquo;

Thrusting across the river gave the company a presence on both banks. Platoons now man patrol points on either side, bringing a semblance of stability to the district core. Firefights still erupt, but their brevity and reduced frequency suggest a weakened foe. Coalition forces estimate they have killed at least 60 enemy combatants.

&ldquo;We&rsquo;ve come in and made a difference,&rdquo; said Sgt. Robert Stewart, standing guard in a mud-walled alley near the river where insurgents launch occasional ambushes. Securing the market area has enabled troops to increase their visibility across the valley with foot patrols in adjoining villages.

&ldquo;We&rsquo;ve gotten rid of a lot of bad guys and we&rsquo;ve tried to show the locals there&rsquo;s a better way of life than what the Taliban offers,&rdquo; Stewart said.

Yet, the hard-won progress that troops have made against a stubborn insurgency has come freighted with casualties &mdash; and questions over whether the gains will outlast their return to Fort Polk, La., in the fall.

The company has had five men killed in action, and more than 60 of its 140 members have earned a Purple Heart. The percentage of wounded is among the highest for a unit deployed in the last five years of the U.S.-led war in Afghanistan.

Heading out of the combat outpost on an afternoon patrol, 1st Lt. Cody McBroom passed Observation Point Bolen, a lookout tower named for Sgt. Edward Bolen, 25, who was killed by an improvised explosive device in November. &ldquo;What we&rsquo;ve had guys die for, wounded for &mdash; it&rsquo;s been a steep price to pay,&rdquo; McBroom said.

A short time later, he walked past a bazaar vendor who wielded a tuft of braided rope to brush flies off mutton flanks dangling from metal hooks. Dozens of small shops line the dirt road that slices through the market, with merchants selling meat, produce and a wide range of goods: sandals and soccer balls, teakettles and watering cans, silk tapestries and Mickey Mouse T-shirts.

Several vendors smiled and waved at McBroom and members of his platoon. Two boys approached with hands outstretched to ask the soldiers for pens, a coveted prize among Afghan youth.

He stopped near a path leading from the bazaar to the footbridge that Company B stormed across in March. The trail skirts a welter of bricks, mortar chunks and splintered wood beside a two-story building missing half its facade.

Coalition forces had used the abandoned space as a safe point during overnight patrols. In February, a homemade explosive shredded the building, killing Spc. Rudolph Hizon, 22, and four Afghan soldiers.

&ldquo;You have to hope what you&rsquo;re doing isn&rsquo;t for nothing,&rdquo; said McBroom, 28, whose platoon has lost Hizon and two other men. &ldquo;That&rsquo;s why it would suck if the next unit came in here and didn&rsquo;t keep doing what we&rsquo;ve been doing.&rdquo;

During the bridge battle a few months ago, a grenade hurled by an enemy fighter struck Pfc. Jesus Burgos in the chest and bounced to his right. He had time to take only two or three steps to his left before it detonated; shrapnel struck him in the legs. He returned to Charkh the following week as one of the company&rsquo;s Purple Heart recipients.

&ldquo;I&rsquo;ll be glad to go home,&rdquo; said Burgos, 21, who lives in Napa, Calif. &ldquo;But with the price our guys have paid, you hope the unit that comes in here builds on what we&rsquo;ve done.&rdquo;

A brigade from the 1st Armored Division will assume command of Logar in September.

&ldquo;Without progress being maintained, our men will have died in vain,&rdquo; Hampton said.

Such concerns are common among troops engaged in a counterinsurgency effort with indistinct front lines and strategic priorities that change with annual brigade rotations.

The big picture might be obscured from the ground, but soldiers can see what happens when the military pulls back from a hostile area, according to retired Army Lt. Col. Douglas Ollivant, the former senior counterinsurgency adviser to the International Security Assistance Force in eastern Afghanistan. He offers the example of Kunar province, northeast of Logar, where coalition forces have abandoned efforts to tame the remote Pech, Korengal and Waygal valleys.

&ldquo;A serious downside of withdrawing from a previously occupied position is the effect on both the U.S. troops &hellip; and the native people who have assisted U.S. troops there and may be left to the tender mercies of their opponents,&rdquo; Ollivant said in an email.

&ldquo;It would be much preferable to figure out the ground that we should not contest, rather than have to leave it later.&rdquo;

The shifts in geographical and strategic emphasis tend to coincide with the rotation of brigades and the attendant turnover in leadership. The cycle feeds a perception that, instead of one 10-year war, the U.S. and its partners have fought a series of 10 one-year wars bereft of a cohesive policy to defeat the insurgency.

&ldquo;The American military presence in certain parts of Afghanistan does produce the effect of control,&rdquo; said Col. Gian Gentile, a visiting fellow with the Council on Foreign Relations in New York and a counterinsurgency expert. &ldquo;But once the military leaves, that control fritters away.&rdquo;

McBroom and others in Company B hope that the 1st Armored Division will build on their success. Months after U.S. and Afghan troops imposed order on the bazaar, merchants sometimes warn them of impending ambushes and point to the hiding spots of the enemy fighters. McBroom wants to believe that tenuous trust between villagers and troops will endure.

&ldquo;But every unit, every chain of command is different,&rdquo; he said. &ldquo;If they go in a different direction, there&rsquo;s nothing you can do about it.&rdquo;