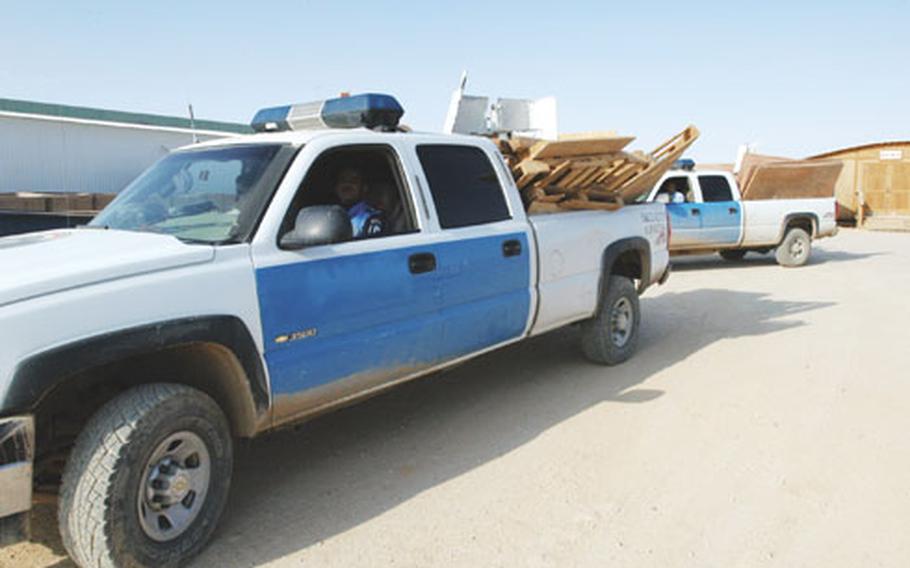 Buy Photo
Iraqi police drive away from Camp Korean Village, Iraq, with two truckloads of wood. Marines form the 2nd Battalion, 25th Marine Regiment donated the wood to the city of Rutbah for the construction of school desks. (Photos by Jimmy Norris/Stars and Stripes)

Buy Photo
Iraqi police drive away from Camp Korean Village, Iraq, with two truckloads of wood. Marines form the 2nd Battalion, 25th Marine Regiment donated the wood to the city of Rutbah for the construction of school desks. (Photos by Jimmy Norris/Stars and Stripes) 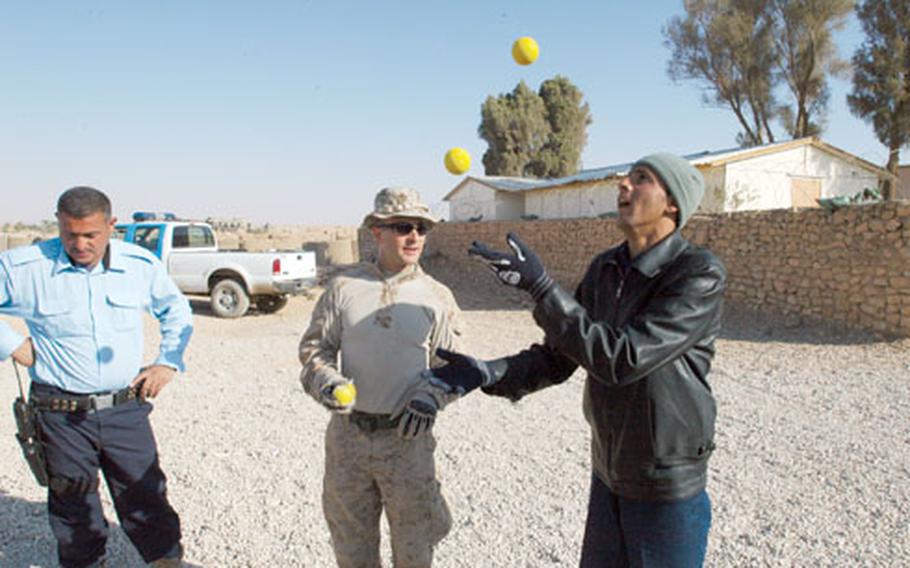 RUTBAH, Iraq &#8212; As with other cities in western Anbar province, Marines and provincial reconstruction teams in the Rutbah district are hard at work trying to jump-start the local economy.

Despite the fact that the U.S. government has spent about $3.5 million in Rutbah over the past two years, reconstruction in the district is about a year behind other cities in the western Euphrates River Valley, said Mark Humphries, embedded PRT liaison.

Humphries attributes the slow progress to the delay in getting an EPRT liaison to the area.

He was the first EPRT liaison to work full time in Rutbah and arrived in July. Other areas were receiving EPRT liaison officers as early as January.

Officials say the area was previously too violent to move past the initial stages of counterinsurgency, described as "clear, hold and build."

"Rutbah has been cleared multiple times," said a Marine captain who works with the PRT and declined to be named, citing safety concerns. "[U.S.] forces held it for a while, then moved on and insurgents would come back. It&#8217;s at the cusp of that build stage now."

The Rutbah district, an area the size of South Carolina, features the country&#8217;s largest port of entry to Syria and roads that serve as a midpoint between Baghdad and Damascus, Syria, as well as Baghdad and Amman, Jordan, said Humphries. It also includes a key path for Muslims making their pilgrimage to Mecca.

Prior to the 2003 invasion of Iraq, Humphries said, the region&#8217;s gas stations and hotels thrived.

The Rutbah district also had a strong livestock industry with more than 1.5 million head of sheep and a strong poultry industry.

The poultry industry ended when the invasion destroyed the infrastructure needed to maintain it and a five-year drought killed 60 percent of the area&#8217;s sheep.

The area, populated largely by nomadic sheepherders, suffers from a high illiteracy rate and 50 percent unemployment.

According to the captain, the area, like many others in western Anbar, has been largely neglected by the provincial government in Ramadi, leaving Marines and members of the EPRT bearing the lion&#8217;s share of rehabilitating the area.

The rebuilding is being done using "lines of operation" methodology.

"LOO is how we do counterinsurgency," said the captain, who is also the LOO manager for 2nd Battalion, 25th Marine Regiment.

"You counter the propaganda the insurgents are using to try and get the people in its side. It&#8217;s bridging the gap between perception and reality."

Lines of operation are broken down into six areas &#8212; governance, economics, essential services, rule of law, communication and security.

Each of the areas has a team of Marines and EPRT personnel who meet with key leaders, offer training and mentorship and occasionally help them apply for grants from the U.S. State Department.

A new soccer stadium, renovations of the Rutbah City Administration Building and city&#8217;s sewer treatment facility, construction of a landfill and an emergency communication network are planned.

Some of the projects are in their early planning stages and others are being undertaken with the Iraqi government, Humphries said.

But he said ultimately the legacy U.S. forces leave in the area won&#8217;t be new buildings or employment programs.

Often, chickens and juggling balls can be more effective than bullets.

The wells in the northern part of Rutbah weren&#8217;t producing enough water.

It turned out that the pumps weren&#8217;t being run at night. The well manager said he was afraid of being shot by Marines at a nearby checkpoint if he was seen checking the water lines at night.

The manager was taken to the checkpoint, introduced to the Marines there, and then given a box of ChemLights to wear while doing night checks. The result: Water output went up by 30 percent.

A leading poultry expert is slated to visit the area in December, according to Mike Humphries, embedded liaison with the PRT.

Officials said reviving the industry will not only give money to chicken farmers, but to butchers, feed growers, health inspectors, restaurant owners and others.

More balls in the air

Lines of operation methodology teams working with the 2nd Battalion, 25th Marine Regiment are hoping to build a soccer stadium and start a youth soccer league in Rutbah to give the kids something to do other than throw rocks.

Unit spokesman Capt. Paul Greenberg is also expected to teach juggling to Iraqi police, who can then go to the local high school and teach students.

Greenberg said he hopes the lessons will foster constructive interactions between the students and the police and give IPs a nudge toward community policing.