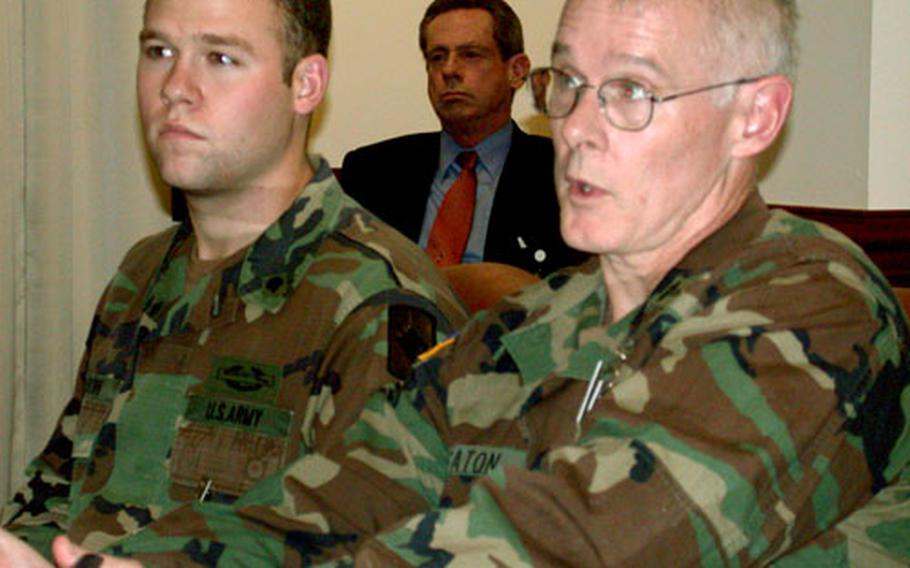 ARLINGTON, Va. &#8212; Many activated Army reservists who are injured or sick can now receive treatment near home, rather than being forced to stay on &#8220;medical hold&#8221; at a base that may be hundreds of miles away.

Scott, who works as a divorce mediator in his civilian life, received back, neck and arm injuries Sept. 17 in Afghanistan.

The program gives soldiers like Scott and Spc. Logan Brown, a 21-year-old from Arkansas, who was hit by shrapnel and received multiple gunshot wounds when his Humvee was attacked in Iraq, a chance to ease back into civilian life.

The program, in which reservists do light duty at their home station between medical appointments, gives soldiers &#8220;that calming time with your loved ones, and the stable order&#8221; of a familiar military environment, Brown said.

The initiative was devised after news stories surfaced in October 2003 about hundreds of Guardsmen and reservists who were stuck for months at Fort Stewart, Ga., waiting to be evaluated and treated.

Army officials blamed a system unprepared to deal with large numbers of reservists getting activated; 4,850 reservists wound up on medical hold.

In March, Reginald Brown, the Army&#8217;s Assistant Secretary for Manpower and Reserve Affairs, assembled a task force to find a solution.

Brown&#8217;s team developed a pilot program that opened &#8220;Community Health Care Organizations&#8221; in Arkansas, Florida, California, Massachusetts and Wisconsin. The first center opened in Florida in March, and all five were operational by late June, said Col. Michael Deaton, a family practice physician for the Army&#8217;s Office of the Surgeon General.

Together, the five centers provide coverage for reservists who live in 23 states, Deaton said.

That is not enough to provide services for all 4,300 Army reservists who are now in medical hold status, Deaton said; just 1,100 of them are enrolled in the new program.

But with a program budget of $23 million for fiscal 2005, the Army will open centers in Virginia, Alabama and Utah by March, Deaton said.

Most reservists will spend no more than one year in the voluntary program, although the Army may extend that time, Deaton said.

More severely injured soldiers from all components are eligible for a different Army program called the &#8220;Disabled Soldier Support System,&#8221; or DS3, at: www.ArmyDS3.org.

Sgt. Christopher Dunbar, a 25-year-old military policeman with the 810th MP Company, a Reserve unit based in Tampa, Fla., is another participant.

Dunbar was injured in a May 4 vehicle accident while providing security for a convoy moving to Tallil, Iraq. He was just five days short of a full year in Iraq when his lower jaw was broken and many of his top teeth were shattered beyond salvation.

Dunbar ended up back at Fort Stewart, Ga., placed on medical hold more than 300 miles away from his home in Tampa.

After a physician realized the severity of the soldier&#8217;s condition and sent him home for 30 days of convalescent leave, Dunbar was assigned to the Community- Based Health Care pilot program in Plant City, Fla.

Today, Dunbar works at his duty station at Plant City five days a week when he is not receiving medical treatment at MacDill Air Force Base.