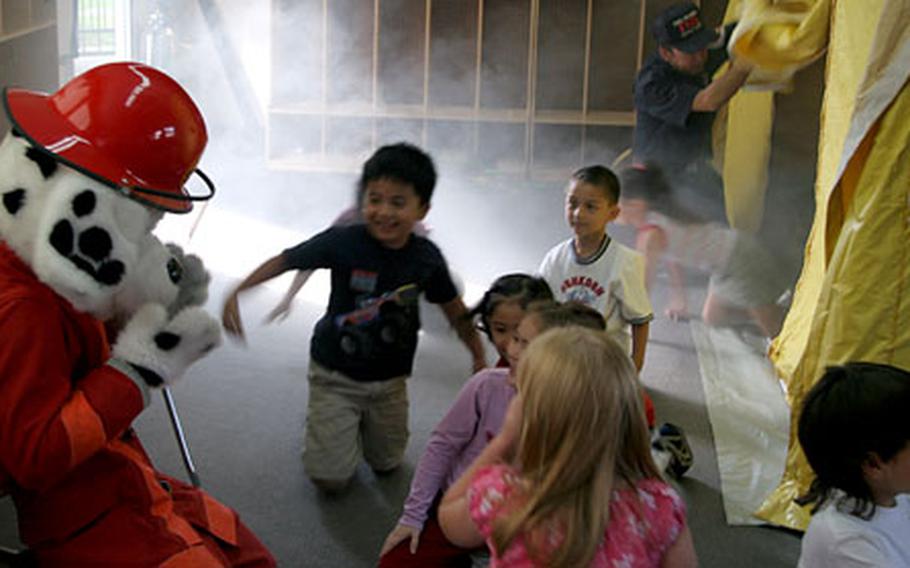 If a big fuzzy dog can&#8217;t get the message across to a room full of elementary students, nothing can.

As part of this week&#8217;s Fire Prevention Week &#8212; a nationwide event also held on military bases in the Pacific every year &#8212; base fire inspectors will visit schools and child development centers to teach kids how to prevent fires, respond to fires and fire alarms and protect themselves from smoke and flames.

&#8220;We spend a lot of time at the schools and the [child development center] teaching fire safety,&#8221; said Dave White, the fire chief at Naval Air Facility Atsugi, part of the regional Commander, Naval Forces Japan fire department. &#8220;The kids learn how to contact the emergency services &#8212; the fire department (on and off base) if they need to &#8212; what to do in the event of a fire, what to do if a smoke detector activates, to crawl low in smoke and what to do if their clothes catch on fire.&#8221;

To make it fun, fire inspectors bring along Sparky the Fire Dog when they visit schools, using the giant, walking cute mascot to make the lessons even more memorable, he said.

Children also learn about escape plans and meeting places for their families &#8212; messages they take home with them.

It&#8217;s the same message passed to them each year, and that repetition helps even the youngest remember, White said.

For fire prevention week &#8212; part of fire awareness events running all month at Atsugi &#8212; the department displays fire safety messages at the Navy Exchange and the commissary. Children will participate in a coloring contest and the entries will be displayed at the commissary later this month, he said.

The theme of this year&#8217;s National Fire Prevention Week is &#8220;Use Candles with Care,&#8221; so fire inspectors will emphasize that while candles are popular and authorized for use in Navy base housing, they are still dangerous, White said.

The week also serves to remind families to check smoke detectors and change batteries. Base officials checked detectors in base housing last month, but families living off base must do it themselves.

White said the department encourages changing batteries once or even twice a year, and checking monthly to see that the detectors work.

Fires occur less frequently on military bases than in homes back in the States due to tighter standards, better communication and more control, he said. But fires still occur, he said, so fire prevention is always an issue.

According to the National Fire Protection Association, fire prevention week was created to commemorate the Great Chicago Fire in 1871 that killed more than 250 people and left 100,000 homeless.

This year, the theme of the week is candle safety.

The NFPA and the U.S. Fire Administration recommend the following for fire safety:

Use candles with care and never leave them unattended.Check smoke detectors monthly and change batteries twice a year.Create and practice a fire escape plan from each room in the house and designate a meeting place. An NFPA study found that 66 percent of Americans have an escape plan in case of a fire but only 35 percent have practiced it.Avoid or use caution with the most common fire starters: unattended cooking, portable or fixed space heaters, smoking materials such as cigarettes and cigars, overloaded electrical circuits or extension cords and candles.&#8212; Juliana Gittler