Program gives JASDF airmen inside look at life on U.S. base 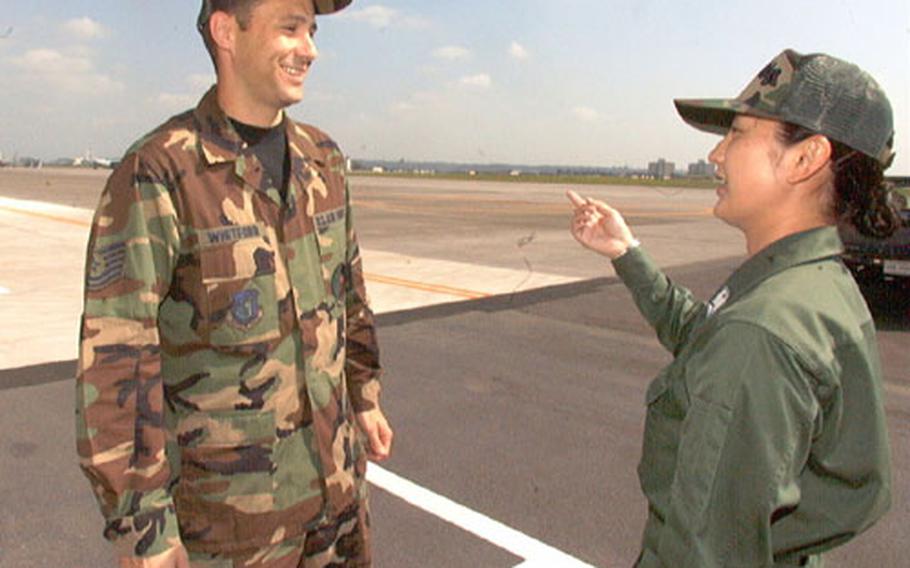 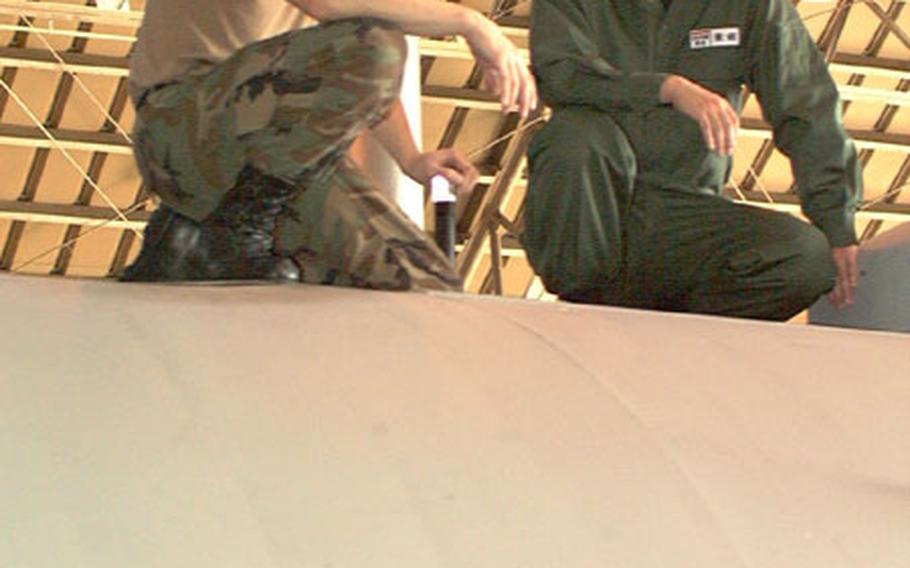 Senior Airman Timothy Stevens, a communications and navigation systems apprentice at Yokota Air Base, Japan, and Staff Sgt. Yukio Shibata of the Japan Air Self-Defense Force sit atop a C-130 Hercules parked inside a Yokota hangar. The worked on the C-130, which was in the shop for maintenance, while Shibata spent 10 days at Yokota as part of 5th Air Force&#39;s bilateral exchange program with JASDF. (Jennifer H. Svan / S&S)

YOKOTA AIR BASE, Japan &#8212; Their military utility uniforms are the dark green of the Japan Air Self-Defense Force, but their camouflage hats bear the markings of a Yokota Air Base squadron.

For four JASDF members, the past 10 days have been a whirlwind introduction to life on a U.S. military base &#8212; including the acquisition of U.S. Air Force camouflage hats.

On the job, they&#8217;ve learned about high-frequency aircraft radios and how U.S. military pilots file flight plans. After hours, they&#8217;ve socialized at barbecues and risen at the crack of dawn to burn off all those extra calories from American food.

The JASDF airmen are at Yokota as part of 5th Air Force&#8217;s bilateral exchange program. Once a year, select JASDF members from all over Japan spend about 10 days at 5th Air Force bases &#8212; Yokota, Misawa Air Base in northern Japan and Okinawa&#8217;s Kadena Air Base &#8212; followed by visits to JASDF bases by 5th Air Force servicemembers.

The JASDF members are matched with a sponsor in a military career field similar to their own. Participants from both sides are in the enlisted ranks. The senior enlisted leaders for each group at Yokota choose a sponsor for the JASDF member. Usually that involves a combination of assigning and taking volunteers, organizers said. Sponsors are asked &#8220;to keep your eye on them and spend as much time with them&#8221; as possible, said Senior Master Sgt. Michael Atkinson, 5th Air Force bilateral exchange coordinator.

The JASDF group at Yokota this week included only the second woman JASDF selected in the program&#8217;s seven-year history, Atkinson said.

Staff Sgt. Hiromi Ikumi is one of about 50 women assigned to Nutabaru Air Base in Kyushu, she said, adding that she was very surprised to be chosen. She attributed it to high scores on her English tests during the selection process &#8212; though she insisted her English is not very good.

But her more memorable experiences were off-duty. At Whitford&#8217;s home, Ikumi learned how to make Thai green curry and sampled American-style barbecued ribs. She played her very first round of golf at Yokota&#8217;s Par 3, watched Monday Night Football at the enlisted club and attended a pig roast at another sponsor&#8217;s house.

Ikumi also joined Whitford for 5 a.m. four-mile runs, explaining that her American lunches were much bigger than her typical Japanese obento &#8212; a small lunch box that usually includes rice, fish and vegetables.

The American hosts said they also learned much from Ikumi. A kimono-wearing master, Ikumi gave Whitford&#8217;s wife a kimono and taught her how to wear the traditional Japanese gown.