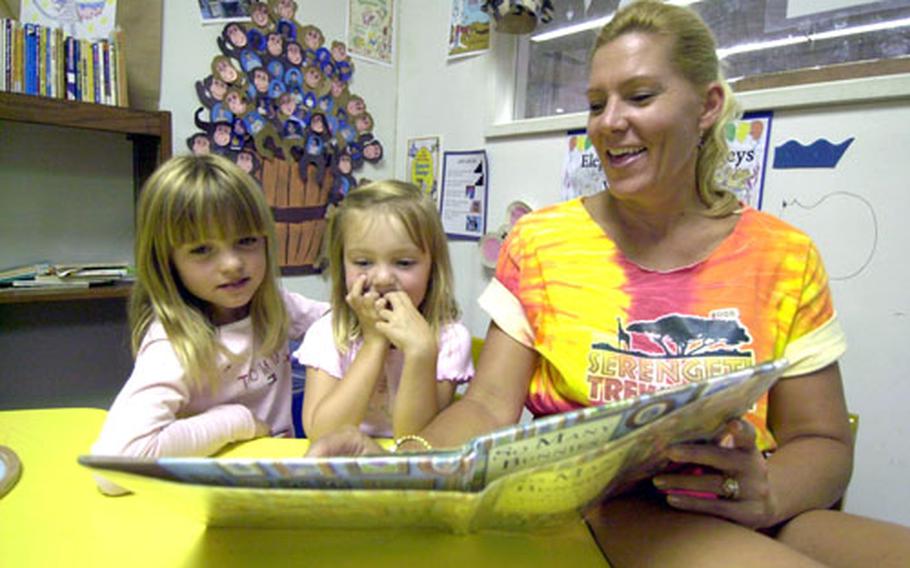 Elyse, 7, Jordan, 4, and their mother, Amy MacIsaac, look over the book “So Many Bunnies” that NCIS Federal Agent Sandy MacIsaac read to his children while being deployed to Baghdad. (Christopher B. Stoltz / S&S)

Elyse, 7, Jordan, 4, and their mother, Amy MacIsaac, look over the book “So Many Bunnies” that NCIS Federal Agent Sandy MacIsaac read to his children while being deployed to Baghdad. (Christopher B. Stoltz / S&S) 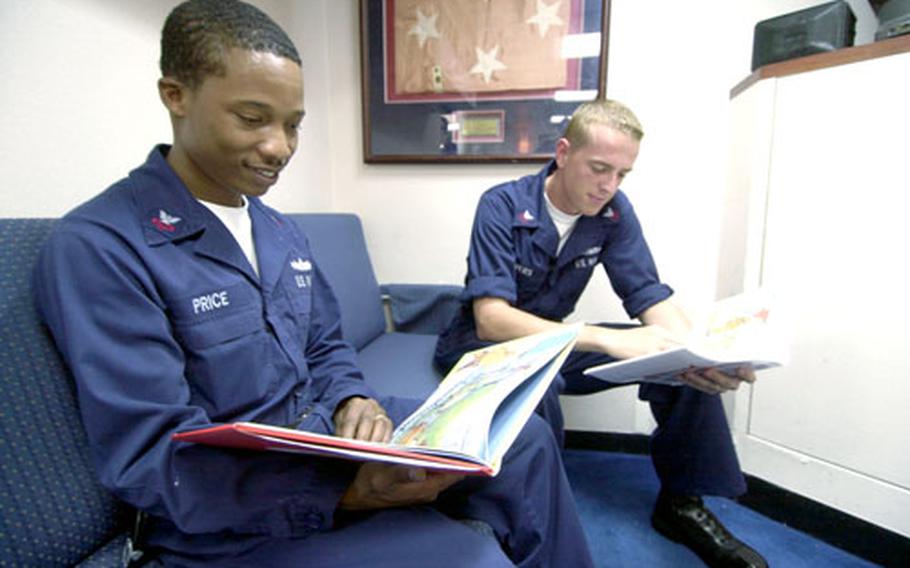 YOKOSUKA NAVAL BASE, Japan &#8212; On every holiday her husband missed when he was deployed to Iraq late last year, Amy MacIsaac was able to play a videotape of him reading their children a story.

&#8220;I was surprised how important it was for him that we were playing it,&#8221; Amy said of her husband, Naval Criminal Investigative Service agent Sandy MacIsaac. &#8220;He would ask every time we talked. He wanted to make sure they weren&#8217;t forgetting him.&#8221;

Under a program started shortly before the Gulf War, deployed servicemembers and civilians can stay in touch with their families while helping their children&#8217;s development using books and videotapes.

United Through Reading, a program created by the Family Literacy Foundation, allows servicemembers and civilians to read books to their children on videotape that the kids can follow along with back home.

The spouse at home can tape the children&#8217;s reaction so the deployed spouse can see the effect. The program has become popular for deployed sailors aboard 7th Fleet ships.

&#8220;This sends a message back that we have not forgotten about you,&#8221; said Cmdr. David Chase, commanding officer of the USS Vandegrift, who encourages his sailors to participate.

The program aids in children&#8217;s development by encouraging reading. It helps the spouse at home show children that the deployed parent is still out there, and gives kids a chance to see and interact with mom or dad, organizers say.

The program also helps keep up language skills when the spouse at home doesn&#8217;t speak English as a first language, said Kara Dallman, the previous coordinator at Yokosuka, who is turning over the organization to Becky Keenan this week. Some of the books are Japanese fairy tales translated into English.

At Yokosuka and Naval Air Facility Atsugi, program coordinators work with coordinators on the ships and many family support organizations to get the word out. Several hundred sailors now use it, thanks in part to a 1,000-book donation made by Barnes & Noble and to videotapes and mailers supplied by the Yokosuka Officers Spouses Association, Dallman said.

Sailors on every ship can tape stories while at sea. Ship libraries have the books available and a ship coordinator makes the videos, offering tips for the camera-shy.

Some sailors record stories for their brothers and sisters or nieces and nephews, Dallman said.

Vandegrift fire controlman Petty Officer 1st Class Brian Lee Silvers came to the Vandegrift right before its last deployment this spring, he said, leaving behind his wife and 11-month-old son in Seattle.

He learned of the program while underway and surprised his wife and son with a video.

Dallman said the program is strong because of the support provided by the ships &#8212; but it&#8217;s the parents who make it work, she added.

How can you get involved?