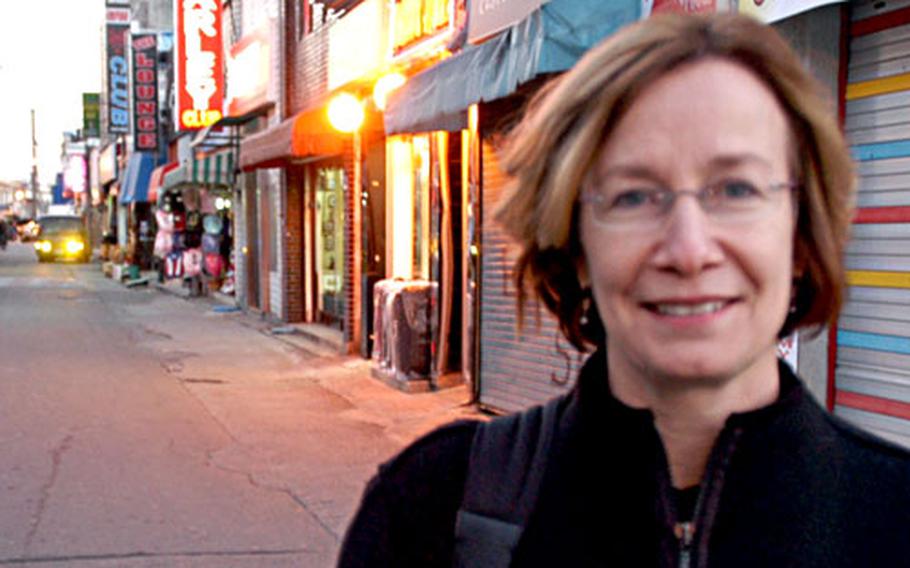 CAMP RED CLOUD, South Korea &#8212; U.S. bases in South Korea and other parts of Asia will be the subjects of a book by a Brown University professor who visited Area I on Thursday.

Professor Catherine Lutz, who also is a research professor with the Watson Institute for International Research, has already published &#8220;Home Front: A Military City and the American 20th Century,&#8221; which looked at relations between Fort Bragg and the surrounding city of Fayetteville, N.C.

That book revealed that Fayetteville residents largely welcomed officers assigned to Bragg but were less accepting of enlisted soldiers, she said.

Now Lutz, who visited Pyongtaek and Seoul before touring Area I, is writing a book about U.S. bases in Guam, Okinawa and South Korea and about the after-effects of the U.S. presence in the Philippines.

It is the second trip to South Korea for Lutz, who began her research here two years ago and plans to return next year to gather more information.

&#8220;Cultural awareness is now a big part of military doctrine. I also want to talk to soldiers about their experience with local culture and understand how they get oriented to local culture and what the difficulties and challenges are,&#8221; she said.

So far, Lutz said, she has detected big differences between the U.S. domestic views of overseas bases and those of foreign communities hosting U.S. bases.

&#8220;There are some pretty sharp differences. Most Americans have a view of the situation here that is at odds with the way South Koreans see it. Americans see us as being very generous in our foreign policy and helping people out. A lot of South Koreans increasingly see us as here in a more self-interested way,&#8221; she said.

&#8220;The older people have a more positive view of the American presence but they still worry about whether they are being respected. They don&#8217;t necessarily feel as if they receive enough respect from the Americans even if they appreciate their presence. Young people worry about South Korean sovereignty &#8212; that South Korea won&#8217;t be fully independent with the Americans having the military role that they have,&#8221; she said.