Professor at Aviano laboring to build gondola at wood shop Craig Manley is out to do something that he was told he couldn&#39;t do: build a gondola by himself. (Kent Harris / S&S)

Craig Manley is out to do something that he was told he couldn&#39;t do: build a gondola by himself. (Kent Harris / S&S) 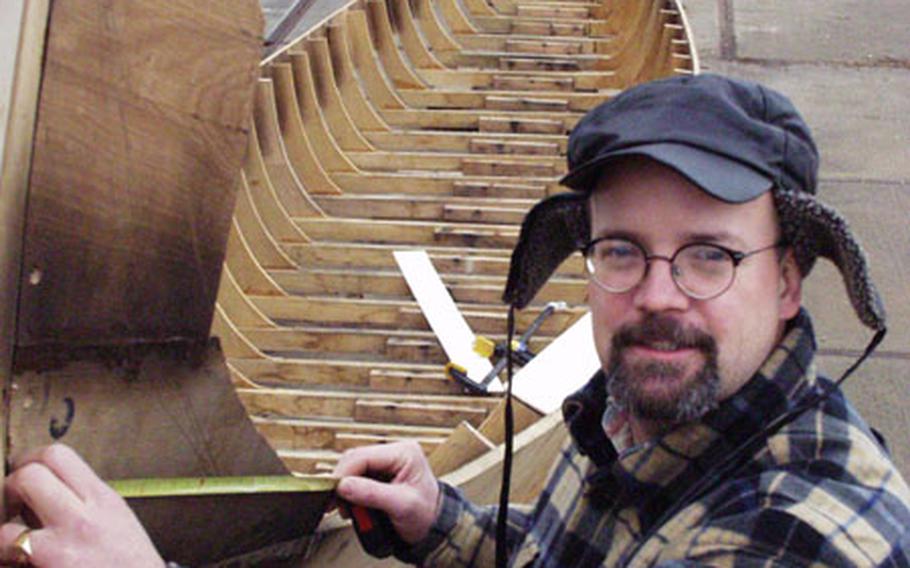 Craig Manley, a professor for the University of Maryland at Aviano Air Base, hopes to have his creation in the canals of Venice in about two years. (Kent Harris / S&S)

AVIANO AIR BASE, Italy &#8212; Craig Manley obviously likes challenges. Told by an American friend in Venice that he could never manage to build one of the city&#8217;s famous watercraft by himself, the University of Maryland professor is doing just that at the Aviano Air Base&#8217;s woodcrafts skills shop.

That&#8217;s the quick background story on the gondola that&#8217;s slowly taking shape on base, miles away from anywhere where it could be used.

Manley, who has been building furniture for years, admits that he&#8217;s had some doubts about finishing the craft.

Paolo Poles, an Italian who managed the base&#8217;s wood skills shop, collapsed and died of an apparent heart attack Oct. 1 while helping Manley on the gondola. Manley found it difficult to resume his work.

He could use those same words to describe his entire project. He&#8217;s been going at it for a bit more than a year now. And, while the frame clearly resembles a gondola, Manley estimates he won&#8217;t have it ready for its maiden voyage for another two years or so.

He doesn&#8217;t plan to trade his job teaching writing courses at the base for a gondolier&#8217;s outfit anytime soon. Those who ferry passengers around Venice are in a notoriously protective union. No foreigners (or women) allowed.

Once the gondola is completed, they&#8217;ll use it to navigate around the city &#8212; if they can get the sometimes tricky parking situation resolved. Gondolas require lots of docking space.

Fellow woodworkers on base give him credit &#8212; for his ambition if nothing else.

Another realized what it was, but thought it looked too big. Nope. Standard size. About 35 feet long and 4 feet at its widest. Those specifications come from a book, &#8220;La Gondola,&#8221; that Manley is using as a guide. He bought the book and some blueprints from a shop in Venice.

Manley has spent much money on the materials for the craft. He bought parts of a tree from a supplier in Treviso and has spent about $1,500 so far on materials. Much of it will be oak, but the craft likely will have seven other varieties of wood before it&#8217;s completed.

Manley said the hardest aspects have been all the odd angles that he&#8217;s had to work with. None of the 33 wooden ribs that form the skeleton are exactly the same as the others. Those that form the perch where the gondolier sits are a bit thicker to support the extra weight.

Manley is in a boat club in Venice, but he says he&#8217;s never piloted a gondola. Not that he&#8217;s very concerned about that.

And how about the seaworthiness of the craft?

He says he&#8217;s learned a lot about the process just by doing it. But he doesn&#8217;t have any plans to become a professional boat builder.