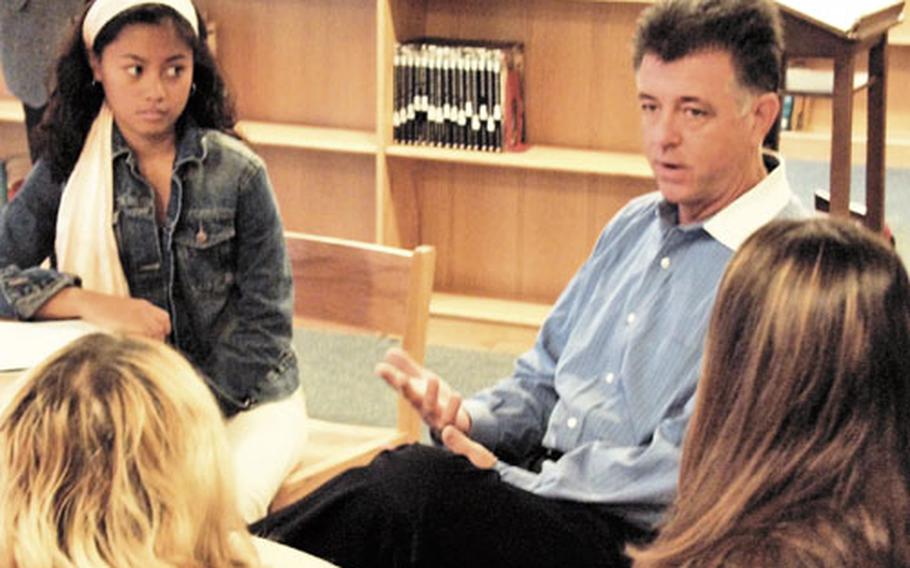 Walter Lewis, the associate producer of "The Tonight Show with Jay Leno," speaks to a group of journalism students Monday at Aviano High School. Lewis is making a swing through Italy to talk to high school students about career opportunities and show business, thanks to the USO. (Kent Harris / S&S)

AVIANO AIR BASE, Italy &#8212; Yes, those seemingly clueless talking heads who have no idea when the War of 1812 began, how many states there are or what Dick Cheney does are real people.

Of course, it takes more than a few interviews to get the right (or wrong) answers that make up one of the popular features on &#8220;The Tonight Show with Jay Leno.&#8221;

That brought an audible sigh of relief from the students &#8212; and possibly some renewed faith in their fellow Americans.

Lewis, starting a tour of Department of Defense Dependents Schools in Italy, gave the students plenty of behind-the-scenes information about the show. He&#8217;s set to do the same in Vicenza, Livorno and Naples this week on a tour sponsored by the USO.

Many things have changed since then. The most obvious is Leno replacing Johnny Carson. But there have been changes behind the camera as well.

Lewis applied for a job while working at the grocery store across the street from the NBC studio that houses the show. &#8220;They&#8217;d hire anybody&#8221; then, he said.

Today, someone would need a college degree and good grades to even get a look at most entry level jobs on the show. Not that there aren&#8217;t a lot of jobs to go around. Lewis said more than 150 people have a hand in the show every day, though most don&#8217;t put in the 18-hour days the host does.

Lewis is one of 11 producers on the show. He detailed the tasks the other producers have and told students about the other jobs required to get the show on the air five days a week. He even produced (and starred in) a videotaped backstage tour of the studio that he presented.

Some of the students Lewis talked with Monday might eventually head into the field. He spoke to students taking drama, journalism and video production courses.

&#8220;Where do you find people like that?&#8221; was one of those questions, referring to the odd people who do strange things on the show.

The show has six producers responsible for bringing such celebrities and not-so-famous personalities to the show. Lewis isn&#8217;t normally one of those people. In fact, he said he rarely has contact with the guests who appear.

It was Lewis&#8217; second trip to Aviano. The first was to prepare for a holiday show Leno taped from the base in 1995.