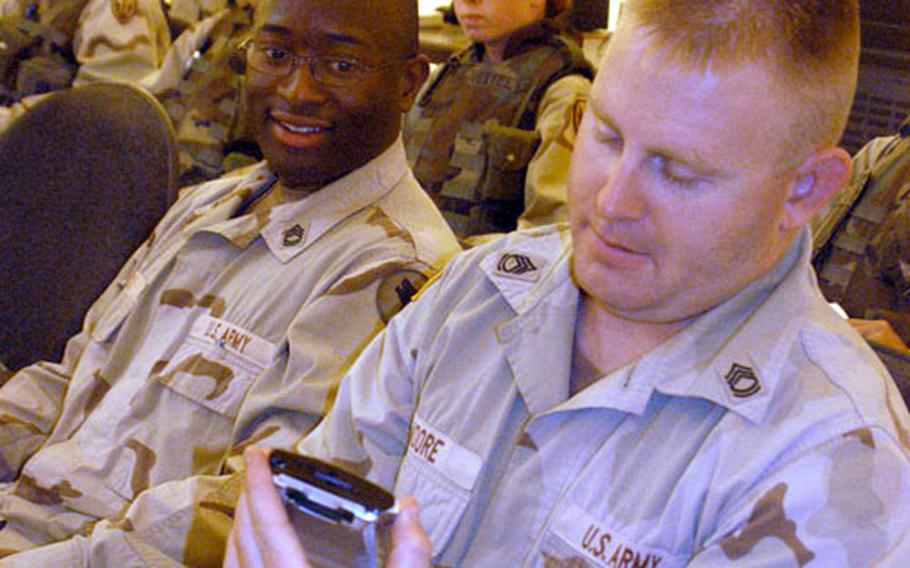 Col. David Jack looks over a soldier’s computerized medical questionnaire as part of the Deployment Cycle Support at the LSA Anaconda Personnel Processing Center. In the background are several of the Ipaq units used for the questionnaire. The devices generate a card so soldiers can carry their records with them. (Juliana Gittler / S&S)

The travelers included servicemembers and civilians, in units or on their own, heading home, into theater, to rest and recuperation trips or on some kind of emergency leave.

As one of the major entry points into the theater, flights from around the world and across the region come to Balad.

The center &#8212; run by McPherson&#8217;s team with help from the Air Force and the contracting firm KBR &#8212; processes, houses and helps to feed and inform the thousands of passengers passing through.

They help units move people and cargo and individuals get home in an emergency. When a C-5 returns after takeoff due to mechanical problems, they help the few hundred passengers find another way out.

In the few days before units board their flights out, they participate in Deployment Cycle Support briefings to prepare them for re-entry into their normal lives.

Before, units would be responsible for orchestrating these briefings, often after they returned home, McPherson said. The briefings include sessions on family reunions, financial issues, suicide awareness and a high-tech medical questionnaire.

During the medical briefing, soldiers complete a relatively new computerized health questionnaire on a hand-held Ipaq computer. Their answers to questions about what they may have been exposed to or any injuries suffered are encoded into a card they bring with them to doctors at home.

The questionnaire looks for battle and non-battle injuries including mental health problems. Doctors look out for tuberculosis, malaria or other diseases more common to Iraq.

Medical professionals at the center also go over the questionnaire with them to make referrals.

While the deployment briefings help units process their personnel, many soldiers wish they could just go home and take care of administrative duties later.

While they wait, transient personnel are housed in a network of tents near the center if they will be leaving soon, and across the base at a tent city annex if they have more than a day or two to wait.

For units, the center alleviates much of the stress of moving troops.

&#8220;For redeployment, they&#8217;ll be in charge of the whole process,&#8221; said 1st Lt. Gladys Aglibot, the liaison officer between the center and the 1st Infantry Division.

The system is effective but there are plenty of kinks to work out, she adds. She would also like the transient housing consolidated to help keep track of soldiers.

Despite a few obstacles, the center continually develops new ways of managing the huge flow of people.

For those in charge, the challenges never end.