Process aims to keep the bad guys out of new force 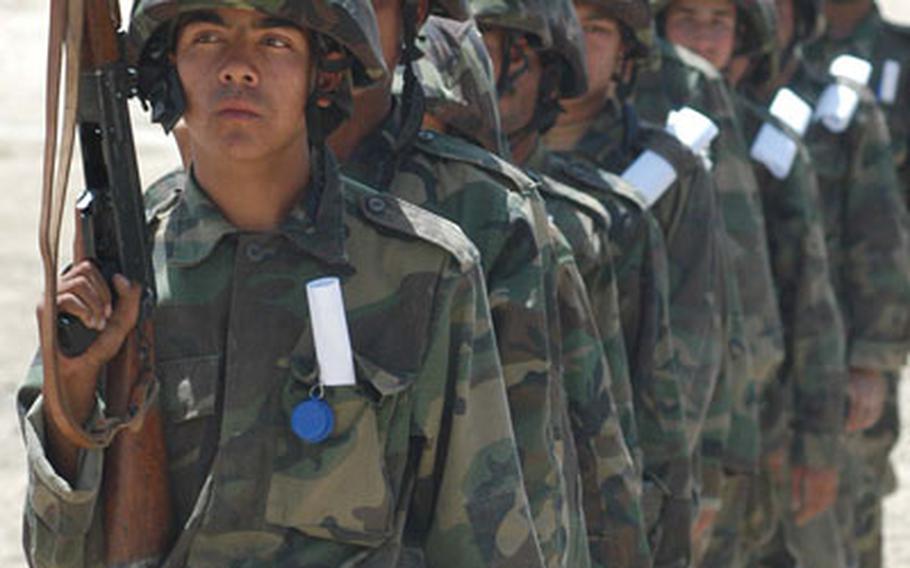 A group of Afghan recruits waits its turn to shoot at a firing range at the Kabul Military Training Center. (Michael Abrams / S&S)

KABUL, Afghanistan &#8212; Before prospective recruits can join the Afghan army or police, tribal elders or mullahs must personally vouch for them.

The requirement is intended to prevent terrorists, criminals and other undesirables from infiltrating the ranks.

&#8220;In this culture, that works very well, because not only does the applicant sign, but also so does the senior official, mullah or tribal elder,&#8221; U.S. Army Maj. Gen. Robert Durbin said.

As head of the program to train and equip Afghan security forces, Durbin says he has a statutory responsibility under the Leahy Amendment to keep bad guys out of leadership positions, especially among the police.

The United Nations Assistance Commission-Afghanistan and the U.S. State Department have the means to do a records check on any Afghan. But it becomes a necessity when an Afghan is vying for a senior leadership position in the military or police. Of primary concern is keeping out anyone deemed untrustworthy or with a history of human rights violations.

There&#8217;s also a procedure to remove incompetent or unqualified senior leaders. It involves a severance package that offers a year&#8217;s pay and benefits, providing the individual reports in every month and proves they have another means of financial support that is legitimate.