Probe: ‘No criminality’ in incident of soldier shooting into Afghan truck caught on video 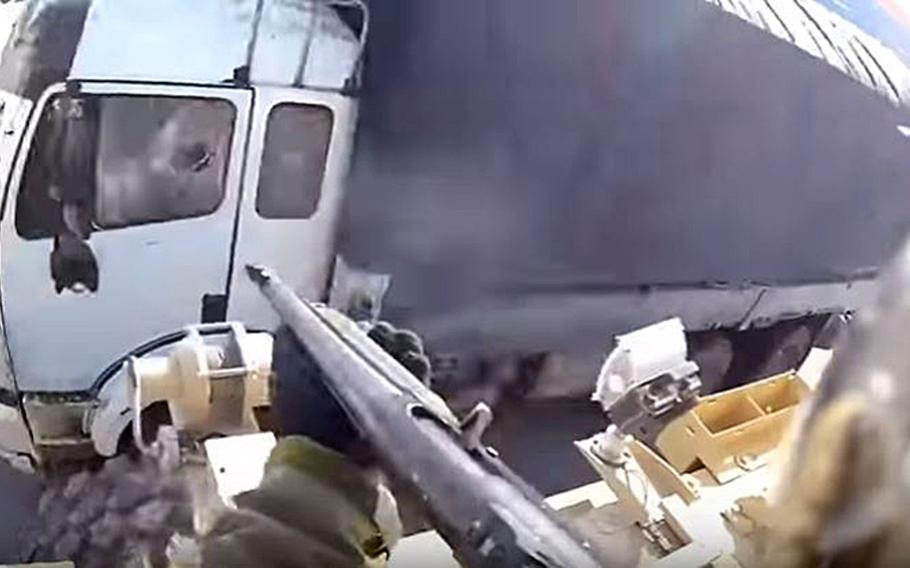 A screengrab of the video that shows a U.S. servicemember firing a shotgun at a truck in Afghanistan. An investigation found that the driver ignored warnings and the servicemember fired a beanbag, in accordance with military rules. (YouTube screengrab)

An American servicemember seen in an online video shooting into a moving truck in Afghanistan acted in accordance with military rules, an investigation has found.

The findings of the Army’s Criminal Investigation Command’s investigation were first reported by VICE News on Friday. An official with the command confirmed the findings to Stars and Stripes.

About 20 seconds into a 3-minute video montage of combat footage, a 2-second clip apparently shot from a helmet camera shows what appears to be a servicemember in the gun turret of an RG33 Mine Resistant Ambush Protected vehicle firing a Benelli tactical shotgun at the driver of a civilian cargo truck. The driver’s side window shatters and the montage cuts away a few frames later.

The investigation into the incident was launched in January, after Politico reported on the footage. Titled “Happy Few Ordnance Symphony,” it featured dozens of clips of combat purportedly from eastern Afghanistan set to the Kendrick Lamar song “Humble,” and was posted online to promote a fledgling tactical clothing brand reportedly started by special operations veterans.

After a thorough investigation, CIC special agents found that the Americans had “acted in accordance with the rules of engagement,” Christopher Grey, a spokesman for the command, said in a statement.

“An Afghan driver ignored several warnings not to encroach on the U.S. convoy, so a non-lethal beanbag projectile was fired at the driver,” Grey said.

It’s not clear where the shooting took place, what units were involved, or whether the driver was injured. Officials did not immediately release a copy of the investigation.

Some critics found the results of the investigation troubling. Matthew Nasuti, a former Air Force captain and military lawyer, said via email that the findings were not credible. He suggested a shot into the driver’s window was too risky and could have caused more harm than warranted.

But, if the driver had ignored several warnings, the warning shot could have been a reasonable measure to eliminate a potential threat, said Gary S. Barthel, a retired Marine lieutenant colonel and attorney at the Military Law Center in Carlsbad, Calif.

Twitter user and Afghan journalist M. H. Arselai had alerted NATO military officials in Kabul to the clip on Twitter back in January, suggesting it showed “your men shooting directly into a truck for fun.”

Attempts by Stars and Stripes to locate the driver or the site of the shooting were unsuccessful, but servicemembers in the video wore uniforms, gear and beards similar to those worn by U.S. special operations forces. The video description indicates they were battling the Islamic State, which at the time was mostly being done by U.S. and Afghan special operations troops in the country’s east.

It quickly prompted military officials to call for a probe, with Army Gen. Joseph Votel, head of U.S. Central Command, saying he had reviewed the video and was “disappointed.”

Soon after it was announced that the video would be investigated, it was deleted and the accounts related to the military-themed Happy Few Co. clothing brand shuttered. Copies of the video have since been reuploaded in several places online.

The three-month investigation that ensued “determined there was no criminality,” the command said.

Barthel, who spent 20 years in the Marines as an enlisted man and later a military lawyer, said a finding of no criminality doesn’t preclude administrative action against the troops involved in the incident.

U.S. military officials declined to comment on the incident and referred questions to CIC. A spokesman there declined to provide comment beyond Grey’s brief statement.