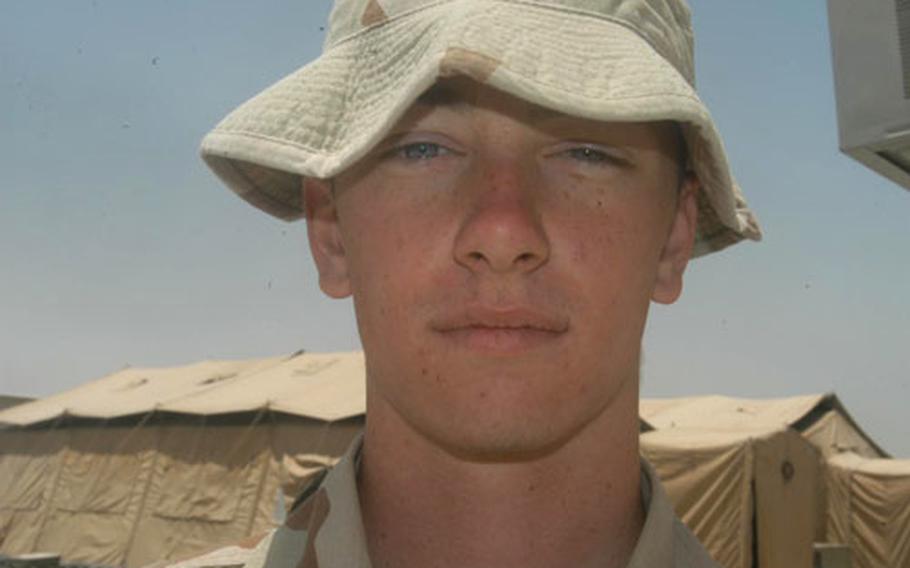 TRUCKVILLE, Kuwait &#8212; The secret weapon to the 233rd Transportation Company&#8217;s yearlong record of no major injuries and no deaths after multiple convoys in and out of Iraq might just be a high-speed private.

Then again, Pvt. Steven Sentel, who is heralded by his comrades as having had six confirmed kills during an ambush near Fallujah, said it was every soldier in his unit that got them out unscathed.

It was soldiers such as Sgt. Serge McAvoy and Spc. Kofi Weeks, who during the same ambush near Fallujah drove alongside their Marine escorts after they hit a roadside bomb and saved a Marine who took shrapnel to the head and neck.

One Marine died during the attack, but McAvoy &#8212; who ran out under fire and administered first aid while Weeks laid down suppressive fire &#8212; saved the other. Later, the two got the injured Marine out of the area and into a vehicle.

It was also troops such as Spc. Brooke Golladay who sacrificed her all because she believes in her leadership. Golladay said she remembers driving up to 20 hours straight during one convoy to get the mission accomplished because her &#8220;leadership knows what they&#8217;re doing.&#8221;

But to really talk about courage under fire, Golladay said, talk to Sentel.

&#8220;We have this private, straight out of [Advanced Individual Training], not knowing much and hardly knowing anyone in the unit, who had, like, six confirmed kills,&#8221; Golladay said.

Even noncommissioned officers tell tales of Sentel, saying after all those kills he was put in for a Bronze Star, but it was kicked back &#8220;because privates don&#8217;t get Bronze Stars.&#8221; The NCOs say it&#8217;s wrong and that the private deserves more.

Sentel, a 19-year-old from Bowling Green, Ohio, shrugs off the comments with nervous laughter. He has a bit of a different story to tell.

&#8220;Everybody performed just like we did in the training missions, just like we&#8217;re trained to do. Everybody helped out and kept their calm,&#8221; Sentel said of the incidents that unfolded after their Marine escort hit a roadside bomb.

Sentel said after the explosion there was a lot of smoke. His Heavy Equipment Transport vehicle in the lead moved around to the front to help cover the area, while other vehicles stopped to help the Marines or get around the explosion.

&#8220;I saw a vehicle start to creep up and I knew we were in trouble,&#8221; Sentel said. In less than 30 seconds after the explosion, he said he heard the thump and whizzing sound of a rocket-propelled grenade for the first time. Sentel said he could see where the fire was coming from and started to lay down cover.

An RPG hit between the third and fourth axle of his vehicle as he fired back. More RPGs flew toward the unit but fell short, ripping palm trees in half and engulfing them in flames. Sentel said another RPG hit his truck, blowing up the inside driver&#8217;s side of the vehicle. The blast forced his lieutenant down to the ground and nearly knocked him down from the other side of the vehicle.

&#8220;It was the first or second bridge where the city started to curve around. We lost our steering, so we had to jump out,&#8221; he said. Once the vehicle came to an on ramp of the bridge, Sentel said the truck was put in neutral and he and the other members of his vehicle jumped out of their truck and into another.

Sentel said by the time they got into the other truck, the unit was already rolling onto a military camp, away from the attack.

Still, plenty of troops within the unit swear by their brave private. Sentel chalks it up to good leadership.

The main body of the 233rd comes from Fort Knox, Ky., while smaller elements come from Fort Benning and Fort Stewart, Ga. The 233rd now has stopped missions and is preparing to head home in about two weeks. It is scheduled to be back in Iraq for its third rotation by November.