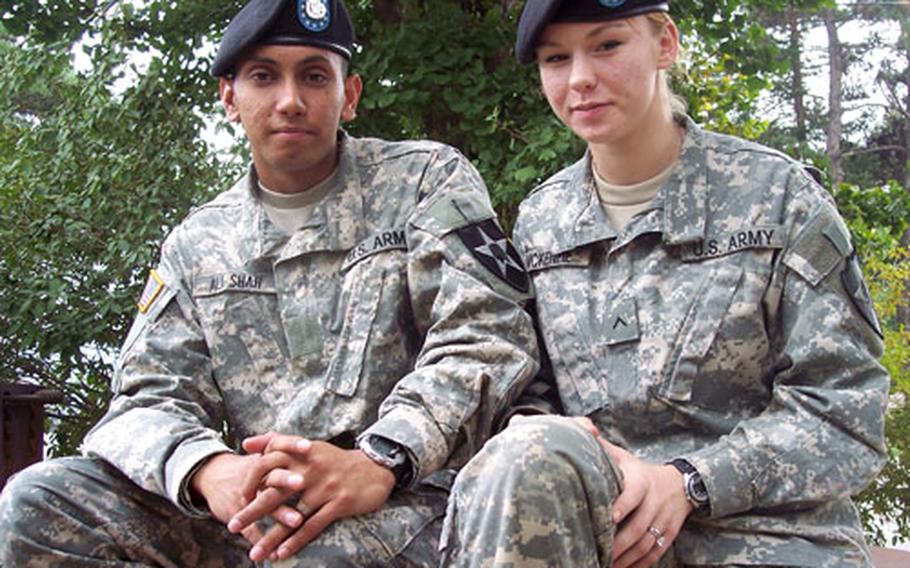 Pvt. Naveed Ali Shah and Pvt. Angela McKenzie arrived at their post in South Korea last week as newlyweds, having met during advanced individual training. McKenzie adopted her husband&#39;s Islamic faith in July and is fasting during her first Ramadan. (Erik Slavin / S&S)

McKenzie married Pvt. Naveed Ali Shah after meeting him at advanced individual training and arrived with him at their 2nd Infantry Division public affairs post this month.

She converted to Islam in mid-July and is now fasting during daylight hours for the month of Ramadan for the first time.

McKenzie, who was raised Baptist and confirmed as a Lutheran, said she studied Islam thoroughly before making her decision.

Most people are very surprised when they hear McKenzie is a Muslim, she said. They have their misconceptions, and she does her best to answer questions.

Ali Shah has heard those misconceptions periodically throughout his life. He is a native Pakistani born in Saudi Arabia. He moved to the United States when he was 2 and grew up in Springfield, Va.

Ali Shah says it&#8217;s better to be with family for Ramadan, but he&#8217;ll be able to attend services at Yongsan Garrison.

His command has been very supportive, he said.

Their supervisor, Master Sgt. Kanessa Trent, held physical training for the two soldiers before dawn so they could still eat and practice their faith before work.

Ali Shah does his best to be observant, though sometimes it requires creativity.

During advanced individual training, Ali Shah found a corner near his bunk, rolled a towel out and prayed.

Ali Shah said people sometimes make jokes about terrorism to him, but he hasn&#8217;t directly experienced any serious accusations or slurs.

Chaplains trained to serve troops of all faiths

On the journey to Islam