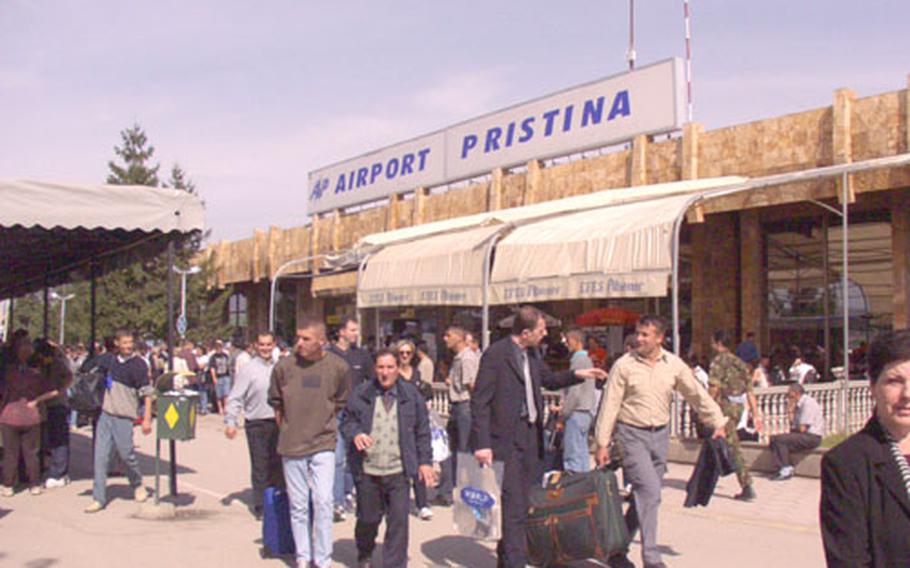 The Pristina Airport, which serves thousands of civilians each day, will soon see an increase of U.S. military personnel due to a new plan to send most KFOR flights directly into Kosovo instead of Skopje, Macendonia. (Sean E. Cobb / S&S)

During a ceremony Thursday, international peacekeepers in Kosovo gave control of Pristina&#8217;s airport to the United Nations.

The transfer of Slatina Airport, seven miles outside the provincial capital, had been &#8220;planned for a while,&#8221; according to Lt. Col. James Moran, a KFOR spokesman. It went through despite the outbreak of ethnic tensions that flared two weeks ago across the province of Serbia, which is under U.N. administration.

About 10 civilian airlines operate from the airport to destinations throughout Europe. In addition, U.S. troops continue to use the airport for troop movements and supplies, U.S. military officials said.

In 1999, the airport was the backdrop for a standoff between NATO and Russia. Following the U.S.-led air campaign that routed Serbian forces, Russian troops stationed in Bosnia and Herzegovina sprinted to the airport ahead of NATO ground troops.

When Gen. Wesley Clark, NATO&#8217;s supreme allied commander, ordered troops to take the airfield, British Lt. Gen. Sir Mike Jackson challenged the order, saying he would not start World War III. Russia apparently wanted to establish a headquarters there, although it later partnered with the NATO mission, keeping a handful of soldiers to guard the airport.

The situation forced the U.S. military to use Camp Able Sentry &#8212; adjacent to the airport just outside Skopje, Macedonia &#8212; as its logistics hub. For three years, American troops would convoy several hours from Skopje to base camps in Kosovo. That meant crossing mountains, an international border and, at times, fighting between Macedonian forces and ethnic-Albanian insurgents.

In spring 2002, the U.S. military began using the Pristina airport, which is about an hour&#8217;s drive from the U.S. camps. Russia withdrew its troops from the Balkans last year.