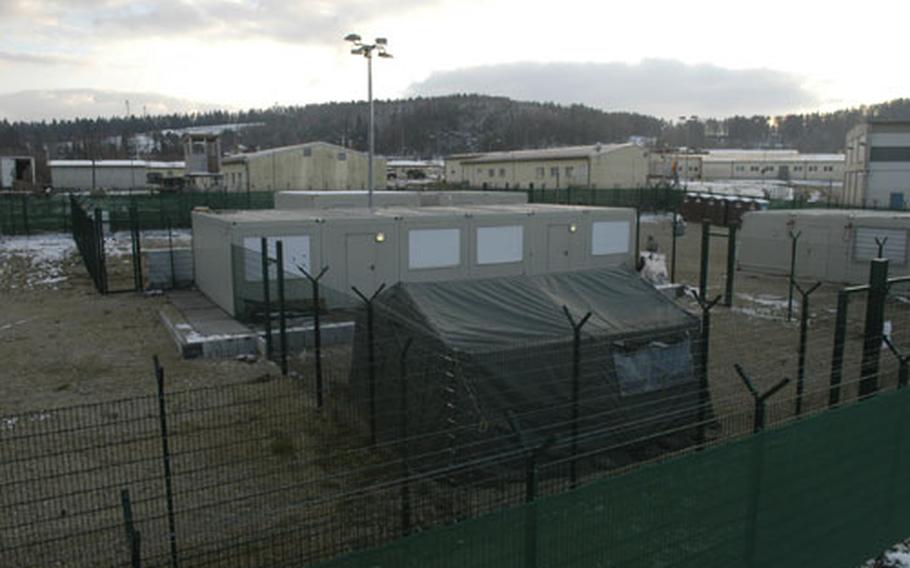 Holding cells, watchtowers and barbed wire are part of the set-up aimed at creating the feel of an actual detainee camp, at the Joint Multinational Readiness Center in Hohenfels, Germany. (John Vandiver / S&S)

While guards man watchtowers and monitor the movement of prisoners, it is the medical staff at the make-believe detention center in Hohenfels who work to determine whether those captured are medically fit to be held.

Spc. Timothy Kemberling, a 47th Forward Support Battalion soldier who works in the detention center health facility, said part of the training is ensuring that detainees are not abused during interrogations.

At the Joint Multinational Readiness Center, soldiers of the 47th FSB are the first unit to train with a full-fledged health center as part of their Iraq deployment preparation.

The 2nd Brigade, 1st Armored Division will finish its mission rehearsal exercise in Hohenfels on Wednesday. The brigade has been in the field since mid-October, preparing for its 2008 deployment to Iraq.

Although much of the training&#8217;s focus is on conducting raids, running convoys and carrying out security operations, managing a detainee detention facility will be part of the brigade&#8217;s downrange responsibility.

&#8220;The main message is we ensure they understand the proper safety, security, and care and custody of the detainees. That is the overriding principle of everything we do. That is the critical aspect,&#8221; said Capt. Gene Lutz, a senior military police trainer at the JMRC.

By Friday afternoon, 47th FSB soldiers at the detention center had processed more than 20 detainees, who move through the camp blindfolded and dressed in orange jumpsuits.

While such training isn&#8217;t new, events such as the Abu Ghraib prison scandal over detainee abuse have put added focus on the importance of making sure soldiers are properly trained.

During the exercise, the first part of the training focused on rules and policy.

Among the lessons: Using physical force to obtain information is prohibited, said Maj. Karin Tackaberry, a legal adviser at JMRC.