Printed or posted: Where are troops getting base news? 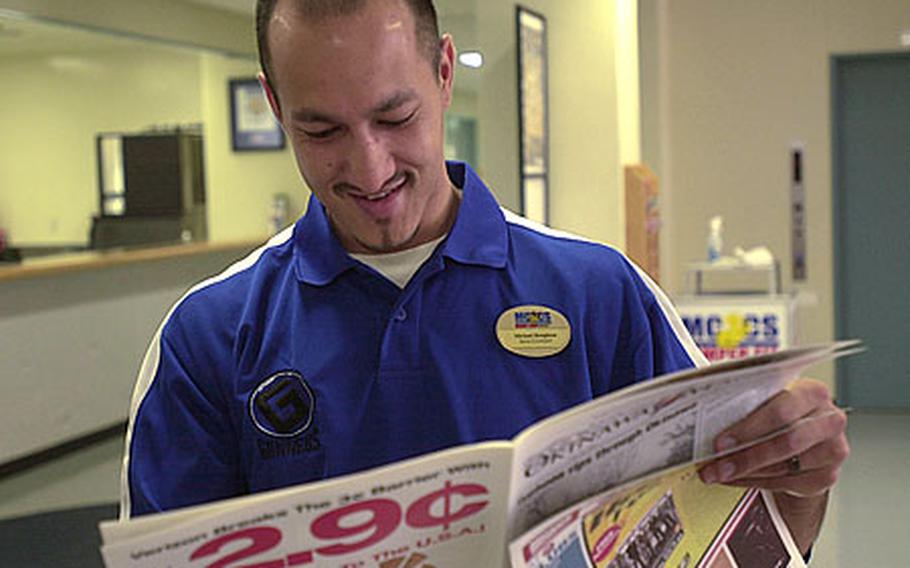 Tech. Sgt. James Cox says when it comes to news, he&#8217;s not the Internet type. He&#8217;d rather read the base newspaper at Osan Air Base in South Korea while waiting in line for chow than while sitting in front of a computer screen.

But in Japan, Senior Airman Amanda Arndt says she rarely looks for a paper copy, finding it easier to get news about Yokota Air Base online.

And then there&#8217;s Pfc. Jose Gonzalez of the 542nd Military Intelligence Battalion in South Korea. He said he&#8217;s never read the military&#8217;s Morning Calm, either printed or online.

So goes the argument: Do servicemembers, their families and military workers prefer newsprint or news links when it comes to finding out about Pentagon policies, movie listings and the prices of used cars? And what happens when those potential readers have little interest in community news in any form?

Air Force changesThe Air Force, in some ways, is finding out.

Last year, the service cut its public affairs staff worldwide by 28 percent, Air Force Lt. Col. Ann Stefanek wrote in an e-mail in response to questions. In dealing with those cutbacks, the Air Force also took a look at its newspaper circulation and budgets.

It found that in 1994, nearly 60 percent of base residents read base papers. Ten years later, that dropped to about 30 percent, Stefanek wrote. At the same time, printing and delivering a base newspaper was costing more than $200,000 a year in the States and as much as $60,000 a year overseas, she wrote.

The bottom line: Cutting papers would save an estimated $16 million worldwide, she wrote.

So Air Force base commands are moving their community news to the Web. Although Stefanek described the change as a recommendation, many Air Force public affairs staffers talked this month as if the shift was inevitable. Local commanders can continue to print a paper, but they&#8217;ll have to find the money to do so from within their existing budgets, Stefanek wrote.

Public affairs staffers at Osan, Yokota and northern Japan&#8217;s Misawa Air Base say that as time goes by, more readers are remembering to search the base Web sites for news.

What the troops thinkMany servicemembers interviewed in the past two weeks said they much prefer printed papers. They said they&#8217;d be more likely to read the command paper over lunch or while waiting for a haircut than while surfing online after duty hours.

Air Force public affairs staffs say they know many people don&#8217;t like the change, and they are trying to make the transition easier for readers.

Yokota has been online since early June, and already officials have responded to complaints by making changes, such as adding a community briefs section to the site, Kurfman said.

Going paperless has its benefits, Kurfman said. Putting out an online version saves about 40 to 60 work hours weekly, and as staffers get more adept at using the Web, they will be able to put out more news, updated daily.

Still, some believe the best way to reach servicemembers is to hand them a free newspaper.

The Army&#8217;s 2nd Infantry Division, stationed north of Seoul, prints 7,000 copies of the Indianhead each week, according to Maj. Kimeisha McCullum. The command has no intention of changing gears, she said.

Charles Howard, a spokesman at Sasebo Naval Base in Japan, disagrees.

Sasebo&#8217;s newspaper went online in October 2005. Inevitably, some people miss the hard copy, Howard said. But the complaints ceased long ago, he said, and he sees the online version as a bonus for a base that routinely sends sailors to sea for months at a time. It&#8217;s also a plus for Sasebo&#8217;s many sailors and families living off base &#8212; checking the Web site can be easier for them than swinging by base for a paper copy, he said.

Is it working?It&#8217;s hard to know how effective the online versions are.

At Yokota, 7,307 people looked at the base&#8217;s Web site during the first week of July. On average, they stayed at the site for just 2 minutes and 13 seconds. The air wing used to print 5,500 newspapers each week, Kurfman said.

Instead, he judges by real feedback. A recent posting on Misawa&#8217;s Web site about water testing on base drew immediate comments and questions from readers.

However, it&#8217;s not clear if that works for everybody.

Each of the half-dozen airmen interviewed at Misawa earlier this month said they preferred the base newspaper over the Internet for command news.

He said he doesn&#8217;t think to check the Internet for news.

Weighing costsOne thing is clear: A shift to the Web can save money.

At Osan, for example, the command is saving $79,000 a year by ending the Mig Alley Flyer paper run, according to 2nd Lt. Kim Schaerdel, chief of media relations for the 51st Fighter Wing at Osan.

A few years ago, budget woes at Naval Air Facility Atsugi in Japan forced the paper online, according to Brian Naranjo, the base&#8217;s spokesman. The public affairs staff followed guidelines that prohibited the identification of family members and information about planned gate closures.

To control who was able to read the online version, the Skywriter offered free online subscriptions. They got only 200 to 300 takers, Naranjo said last week. Now, they are back to printing 3,100 copies every two weeks.

Some public affairs staffs still worry about servicemembers who don&#8217;t seek out command news in any form. They hope more news about the servicemembers, more video feeds and more direct links to the American Forces Network eventually will draw more online hits.

But it&#8217;s hard to reach servicemembers like Sgt. Susan Johns, of Company E, 2nd Battalion, 2nd Aviation Regiment in South Korea, who said she reads none of them.