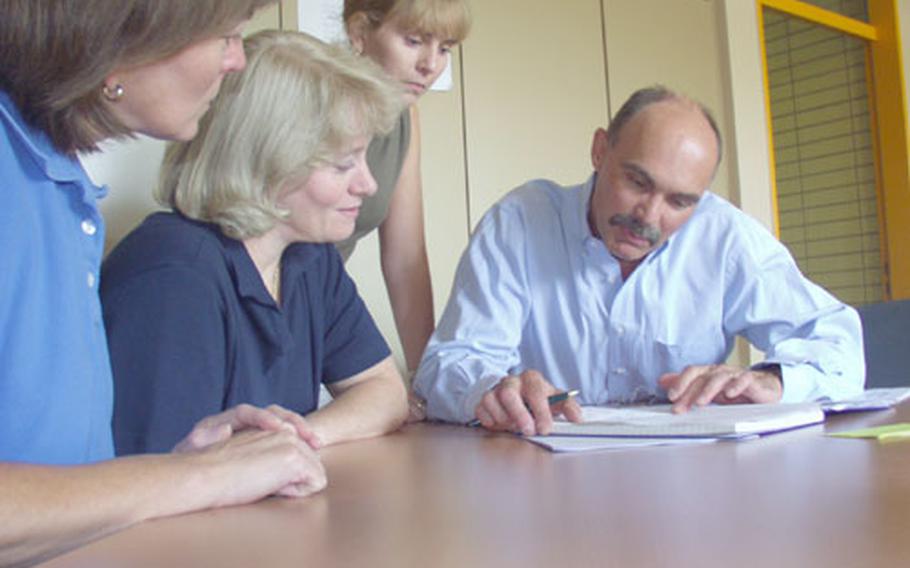 Russ Claus decides on scheduling and calendar preparation prior to the start of the school year with Amy Fuller, registrar, next to Claus, Katie Chaney, administrative assistant, in the middle, and Joyce Wakefield, office manager. (Jessica Iñigo / S&S)

Even though he has a famous last name, Russ Claus hasn&#8217;t been using those connections to get ahead. But the family resemblance can still be seen in the eyes.

The gleam shines through with childish wonder and enthusiasm in the 48-year-old Darmstadt Elementary School principal who claims family ties to the jolly old elf Santa Claus.

But this Claus makes children happy in another way &#8212; through education.

Claus was recently named Department of Defense Education Activity elementary school principal of the year for 2003 for his programs that inspire children to excel in mathematics, science, and reading.

But this comes from a guy who makes children feel special by wearing a tuxedo to school and holding a monthly award assembly for excellent work.

&#8220;This isn&#8217;t just good work, this is exemplary work,&#8221; Claus explains as he readies for the new school year, which starts Tuesday. &#8220;Students need to be rewarded throughout the school year for their work. True, they get grades at the end of the quarter, but if a child is really doing well one week they should know it.&#8221;

Claus, who has a bachelor&#8217;s degree from Kansas State University, a master&#8217;s from Towson State University in Maryland, and a doctorate from a German university in Giessen, holds the Star Assembly award ceremony complete with balloons and a band. He said the hoopla inspires other children to try to do their best.

&#8220;Initially, when I used to talk to children about why they liked school they would say their favorite part was recess. Now, when I ask them, they say things like long division,&#8221; he said.

But hitting the books didn&#8217;t come naturally to the children; it was Claus who made it seem just like play.

Instead of sending misfits to the principal&#8217;s office to be counseled, Claus welcomes all children in without fear.

He began to invite students in for a science study group. He would teach physics on Fridays with the premise that all the children in the group had to remain on their best behavior. If a single child in one of the groups got in to trouble throughout the week, the science group wouldn&#8217;t meet.

This led to a sort of chain reaction throughout the school, he said.

He said there are no disciplinary problems in the Darmstadt Elementary School.

In fact, Katie Chaney, administrative assistant, said children began visiting the principal&#8217;s office any time they got a chance.

&#8220;They would come in all the time. It was really strange. They just wanted to do things for him. They even started coming in early just to water the plants before school,&#8221; she said.

Wakefield said they once overwatered the plants to a point where the water flooded the office, wetting books and paperwork.

This was just another learning experience for the children, though.

But, it&#8217;s not just the children who excel when Claus is around. Faculty members have been hitting the books as well.

A professional development program aimed at teaching the teacher starts weeks prior to the beginning of each school year.

When children get back, teachers are motivated and ready to launch new teaching methods. Sometimes the motivation goes far beyond the typical classroom environment, according to Claus.

The success of the tutoring program has helped students progress up to two years of reading levels during a single school year, according to Claus, whose wife, Terry, is a teacher in Hanau.

And in the spirit of old St. Nick, Claus will be back to making his list for the new school year.

Instead of finding out who&#8217;s naughty or nice, he&#8217;ll simply have the very best add their name to the long list of Star Assembly winners of the past.