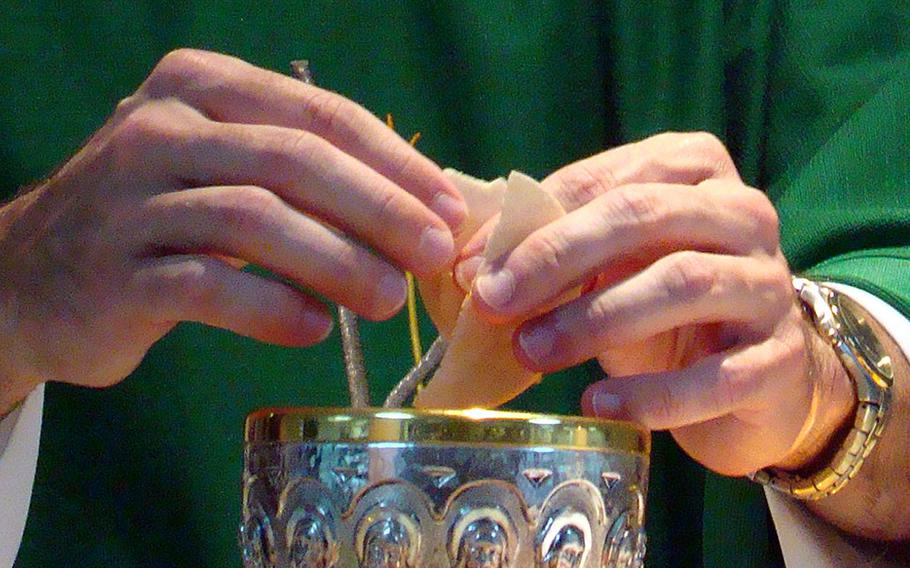 A Catholic priest in the U.S. Air Force performs a confirmation ceremony at base chapel in Southwest Asia on Aug. 17, 2008. (Denise Johnson/U.S. Air Force)

RAF MILDENHALL, England — The organization that oversees Roman Catholic priests in the military has issued a set of guidelines emphasizing that clergy are not obligated to participate in any ceremony that endorses same-sex relationships.

“No Catholic priest or deacon may be forced by any authority to witness or bless the union of couples of the same gender,” read a letter from Archbishop Timothy P. Broglio, dated Sept. 17, published by the Archdiocese for the Military Services, USA.

A spokesman for the archdiocese said in an email that Broglio’s letter was published in response to requests from “many chaplains for guidance” following the Department of Defense announcement that it would recognize same-sex marriages and extend benefits to gay spouses.

The guidance comes just weeks after the North American Mission Board — the mission arm of the Southern Baptist Convention, which is responisible for the largest share of active-duty military chaplains — prohibited members from participating in services for same-sex couples, including weddings, counseling sessions and couples’ retreats.

Broglio’s letter did not explicitly prohibit Catholic clergy from participating in services for same-sex couples, but said clergy cannot be compelled to participate in such services.

“No Catholic priest or deacon can be obliged to assist at a ‘Strong Bonds’ or other ‘Marriage Retreat’, if that gathering is also open to couples of the same gender,” Broglio’s letter stated. “A priest who is asked to counsel non-Catholic parties in a same-gendered relationship will direct them to a chaplain who is able to assist.”

Catholic clergy’s participation in change of command, retirement and promotion ceremonies “is possible as long as the priest is not required to acknowledge or approve of a ‘spouse’ of the same gender,” the letter continued.

“A priest may not be placed in a situation where his assistance at a funeral for a Catholic would give the impression that the Church approves of same sex ‘marital’ relationships,” Broglio wrote.

However, priests “must minister to all regardless of their sexual inclination,” he wrote.

The letter came at about the same time that Pope Francis said in an interview for several Catholic publications that it is not necessary for the church to talk about issues such as homosexuality “all the time.”

“The church’s pastoral ministry cannot be obsessed with the transmission of a disjointed multitude of doctrines to be imposed insistently,” Francis said.

Earlier this month, the DOD released a statement, which reads in part: “The Department of Defense respects, places a high value on, and supports by policy the rights of members of the military services to observe the tenets of their respective religions or to have no religious beliefs. The Department does not endorse religion or any one religion or religious organization, and provides to the maximum extent possible for the free exercise of religion by all members of the military services who choose to do so.”

Currently, there are 235 Roman Catholic priests on active-duty service, the spokesman for the archdiocese said. Total active-duty chaplains number 2,884, according to the DOD, with 2,375 in the Reserves.