Priest in Baghdad fights for his parishioners' souls — and their lives 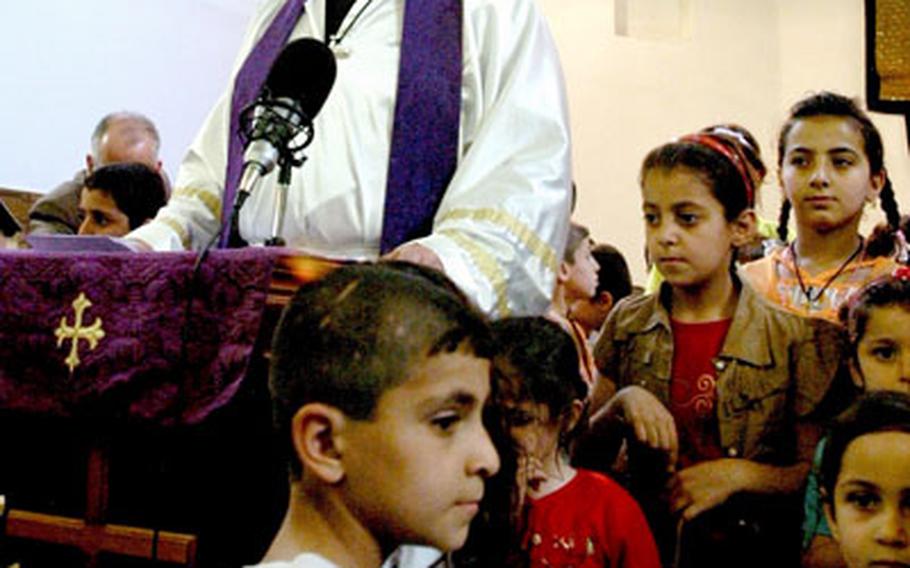 Despite being away from his wife and two sons who live in England, the Rev. Andrew White says his family is used to his absences and understands why he is called to help St. George Church on Haifa Street in downtown Baghdad. (Geoff Ziezulewicz / S&S)

Despite being away from his wife and two sons who live in England, the Rev. Andrew White says his family is used to his absences and understands why he is called to help St. George Church on Haifa Street in downtown Baghdad. (Geoff Ziezulewicz / S&S) Children celebrate Palm Sunday at Baghdad’s St. George Church with homemade crosses they later paraded around with. For more photos, see the link at the top of the story. (Geoff Ziezulewicz / S&S)

BAGHDAD &#8212; Of the roughly 80 million members of the Anglican Church worldwide, the Rev. Andrew White reckons none of them would want his job.

Few would voluntarily risk death over six years of war in order to provide the spiritual and daily needs of Iraqi Christians. Who would live in Baghdad if they could get out at any time, with their wife and two children back home in England?

What would possess a man to cross the entryway into St. George&#8217;s Church on Haifa Street in downtown Baghdad a few years ago, at the height of the sectarian massacre, on a morning when bodies hung from the streetlights?

In the simplest terms, White said he had a calling.

White maintains a quick and astute sense of humor. So far, he says, it&#8217;s been a good year. Only six church members had been kidnapped as of Sunday.

Sunday&#8217;s service teemed with women and children, vastly outnumbering the men in the pews.

"They have had most of their men killed," White said. "At one stage I only had six men left in the church."

One pastor and his family were kidnapped a few years ago while driving back from a church conference in Jordan, said Dowlat Abouna, the church warden. Another was kidnapped last year.

"We paid a ransom and they freed him," Abouna said.

White has served as a mediator in 139 hostage cases from inside and outside the church community.

It&#8217;s harder when someone is taken for strictly financial reasons, he said, rather than political reasons.

The current lay pastor administering to the congregation of about 2,000 has been threatened as well.

"I tell people when they come for job interviews that the benefits of this job are out of this world," he said. "They&#8217;re not in this world."

White is not immune to the carnage.

"There have been days when I&#8217;ve literally sat down on this bed and cried, because so many people have been killed," White said. "In a way it&#8217;s even more difficult when they&#8217;re injured, when you have to try and provide for them ... and restore them."

White first came to Iraq in 1998, the head of an Iraqi-U.K. reconciliation effort. He also leads the U.K.-based Foundation for Reconciliation in the Mideast.

St. George&#8217;s also runs a clinic and dental office for church members and the mostly Muslim community in the area, and White brings medicine with him when returning from England. For Palm Sunday, he worked out a donation from the Lego company. Hundreds of children walked away with new toys, and the Dutch ambassador showed up to help distribute them.

When he first arrived in 2003, St. George&#8217;s was "abandoned and derelict," White said of the church, built by the British after World War I.

The church served mainly Western military and diplomats right after the invasion, White said, but took on an increasingly local flavor after that.

Saddam Hussein&#8217;s regime did not allow anyone into the church, according to Fayez Georges, the church&#8217;s latest lay pastor, a man who looks after the flock when White is not there.

"We [saw] this building from our side and we wished to enter," Georges said through a translator. "After the invasion, the church became part of our life."

But religious freedom brought danger. Georges is aware of the grim track record of pastors who came before him.

"I know that this is very risky," he said. "I devote myself and my family to serve Jesus Christ. There must be a person like me existing and alive to continue."

White brags about his 10- and 12-year-old sons back home, whom he sees only occasionally.

"My little boys are so clever," he said. "It&#8217;s difficult to actually come to terms with the enormity of their cleverness."

His family is used to his absence, he said.

Sometimes he&#8217;ll bring some of the Iraqi teens who call him "Dad" back to England. A group of teenage girls, whom White calls "The Inner Circle," rarely left his side Sunday.

David lived with White for two years and says he worked for the U.S. military early in the war, helping to look after military dogs.

St. George&#8217;s is everything to its members, White said.

"Every week it&#8217;s longer," he said of the service. "When I was first here I did blessings for three hours. And they all continued without me for another two hours. One thing you should realize is they have nothing else except the church. They come and they stay."

As Sunday afternoon began to fade into night, White got into his armored SUV for the short ride back to his Green Zone trailer.

"The one thing I think of, however awful it is, is that I am not leaving here."

Aside from leading Baghdad&#8217;s St. George&#8217;s Church, the Rev. Andrew White also serves as chaplain for Episcopalians, Anglicans and Baptists in the Green Zone, establishing activities so that both his communities can get to know one another.

Recently, about $500,000 in annual Defense Department funding for sectarian reconciliation was discontinued, White said. He still hasn&#8217;t figured out how to plug that lack of funds. Most of the church&#8217;s money comes from donations by individuals and other churches.

"It&#8217;s very difficult," he said. "We will find the money. Because if we do not, everything will disappear."