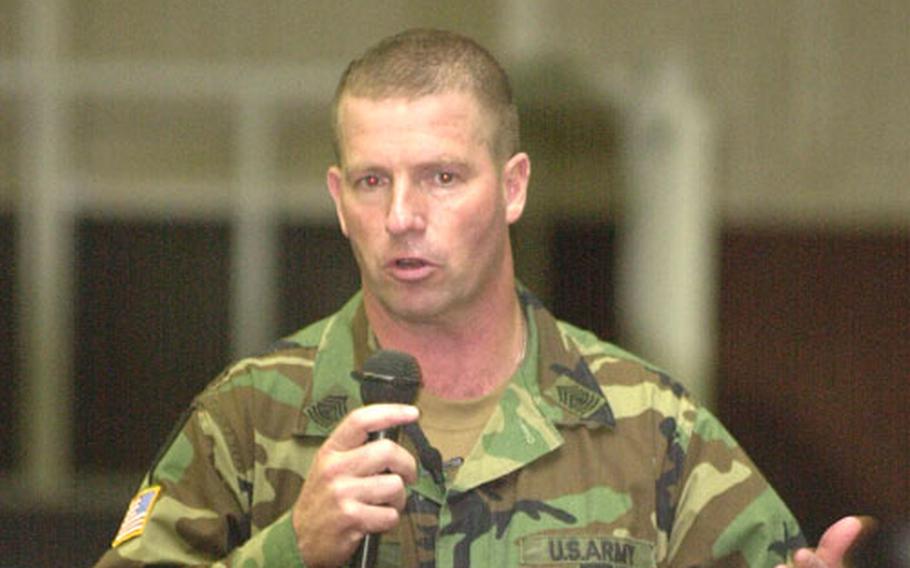 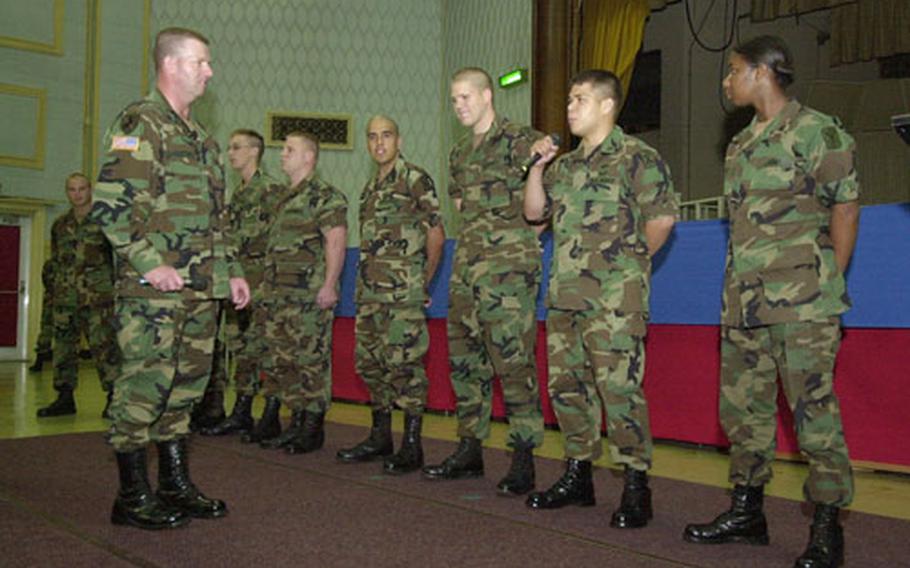 At right, Staff Sgt. Ryan Moreno of the 78th Signal Battalion recites the Soldier’s Creed with the Sgt. Maj. or the Army Kenneth Preston, at left, during his visit to Camp Zama. (Jim Schulz / S&S) 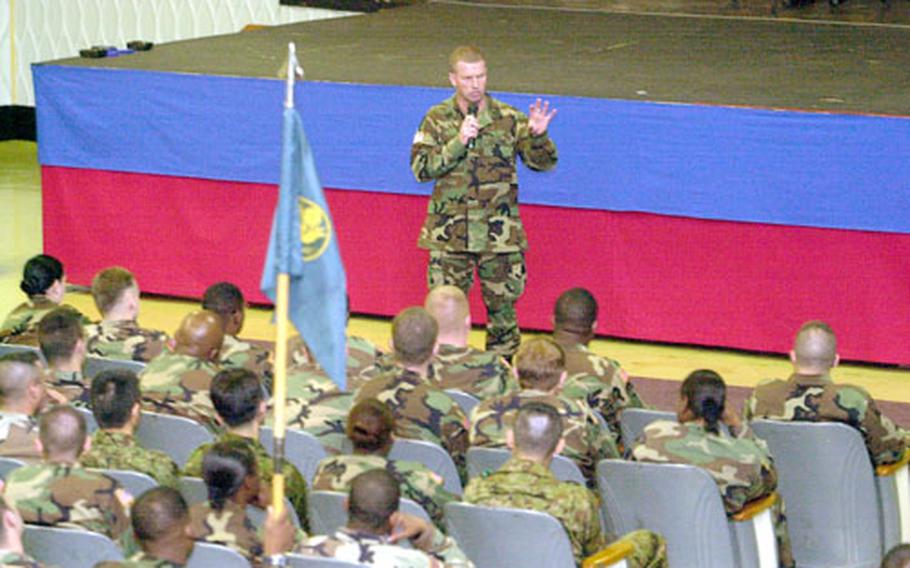 CAMP ZAMA, Japan &#8212; For his first visit to see troops in Japan, Sgt. Maj. of the Army Kenneth Preston spoke about changes to the Army and answered questions during a stop Friday on his trip through Asia.

The Army&#8217;s top enlisted soldier passed around the new Army Combat Uniform for soldiers to see and told them that as participants in current operations around the world, they are playing as much a role as did the World War II veterans before them.

Preston spoke about the Army&#8217;s evolving plans, including longer periods at each duty station. Ideally, he said, troops could serve two back-to-back three-year tours in one location.

During each 36-month block, they could expect to deploy once or twice for six to nine months.

After the first tour, young soldiers would take leadership roles in the same area, helping them remain in one place longer.

The change will help the Army fulfill the goals of transformation: to make a more predictable and stable place for soldiers and their families. Longer periods will help spouses build careers and allow children to remain in one school longer, he said.

Preston also warned soldiers that some overpopulated job specialties, especially those most relevant during the Cold War, will be cut in favor of jobs that are in higher demand now, such as military police, psychological operations and special operations. That would reduce pressure on soldiers currently in those jobs.

One soldier asked Preston how longer tours would affect the one-year hardship tour in South Korea.

Preston said the Army is looking into ways to factor in those tours, possibly using forces from Hawaii or Alaska to balance them. He said incentive pay has encouraged soldiers to stay for an extra year, which also saves the Army moving costs.

Of 300,000 permanent-change-of-station moves each year, he added, two-thirds can&#8217;t be avoided, due to retirements and other moves. Of the remaining 100,000 that could potentially be avoided, 40 percent are tied to South Korea.

Longer tours also would give soldiers there more stability, he said. Soldiers who agreed to an extra year for the incentive bonus have helped the Army save $15,000 in moves.

In response to a soldier&#8217;s question about fitness and weight requirements, Preston &#8212; a master fitness trainer &#8212; said he advocates more fitness and nutrition training for noncommissioned officers to help soldiers stay healthy, not just lean.

Preston finished off by having soldiers recite the new Soldier&#8217;s Creed, which praises a warrior ethos. He said the Army expects its soldiers to all be capable riflemen with infantry skills, so every soldier can secure convoys or do similar tasks.

Preston also is visiting troops on Okinawa, the Philippines and Hawaii. He plans to visit troops in South Korea later in the year, according to his staff.