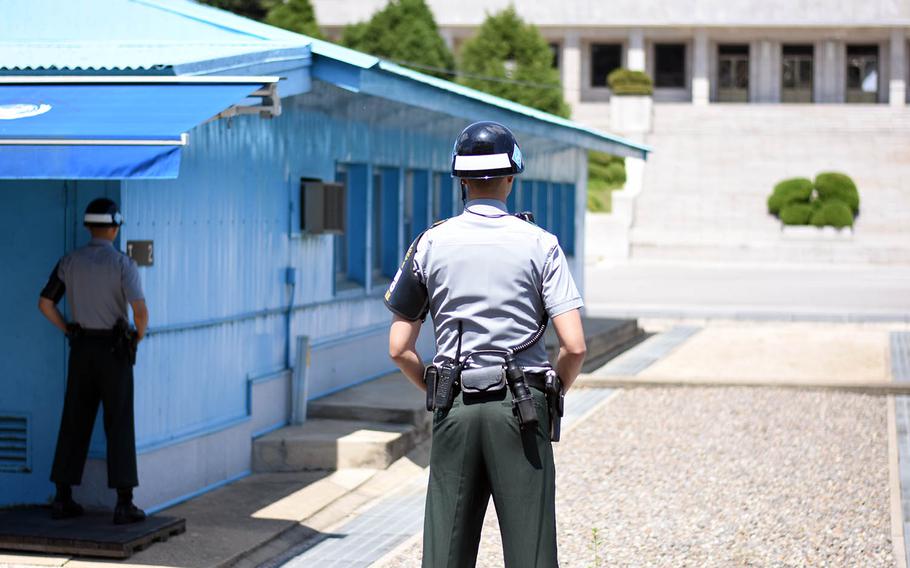 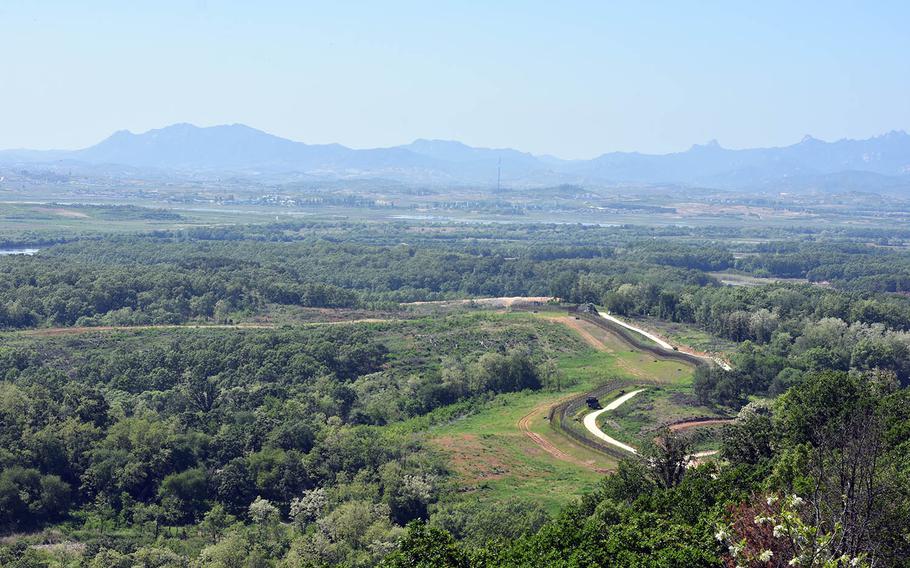 Buy Photo
The Demilitarized Zone separating the two Koreas is seen from South Korea's Dora Observatory in May 2017. (Aaron Kidd/Stars and Stripes)

He also gave his Secret Service guards a scare when he walked to the middle of the Bridge of No Return during a visit to the tense border area in 1993, with North Korean soldiers watching from about 50 feet away.

Several U.S. presidents have traveled to the 2.5-mile-wide, 150-mile-long buffer zone, which is just about 35 miles north of Seoul. But Army officials said Clinton’s stroll on the bridge made him the only one to get so close to the North.

A visit to the DMZ has recently become almost routine for visiting senior officials, who are usually photographed standing in front of the concrete berm representing the Military Demarcation Line between the blue buildings in the truce village of Panmunjom.

The area has even become a popular tourist destination, with coin-operated binoculars providing a view of North Korea from observatories in the South.

But it’s also fraught with danger and symbolism, providing the perfect backdrop for a show of resolve against the North — the common enemy for Washington and Seoul since the 1950-53 Korean War ended in an armistice instead of a peace treaty.

Vice President Mike Pence, meanwhile, was supposed to stay inside the so-called Freedom House in the Joint Security Area but instead stepped outside in April, saying he wanted the North Koreans to “see our resolve in my face.”

The White House has not said if President Donald Trump will visit the DMZ during his Nov. 7-8 visit to South Korea. It was not on the itinerary outlined in a statement issued Monday that included a meeting with President Moon Jae-in, visits with U.S. and South Korean troops and a speech to the National Assembly.

The Washington Post reported that the administration is divided over whether Trump should go, with some aides worried a visit would stoke already high tensions as well as security concerns.

Trump has been recently engaged in an unprecedented war of words with North Korea, which has shown major progress toward its goal of developing a nuclear-tipped missile that could target the U.S. mainland.

Analysts said a presidential visit to the DMZ would send a strong signal to North Korea but expressed concern about Trump’s recent use of belligerent rhetoric instead of the measured diplomatic messages of his predecessors.

“It’s important for U.S. presidents to show America’s resolve by going to the DMZ and seeing the division first hand and how close the two sides are in proximity,” Duyeon Kim, a visiting senior fellow at the Seoul-based Korean Peninsula Future Forum, said in an email.

“But the danger and concern is Trump’s tendency to go off script and make provocative and bombastic comments. The DMZ is certainly not the place to be in to aggravate the North,” she added.

A look at past presidential visits to the world’s most fortified border provides valuable historical context to decades of animosity.

President Ronald Reagan peered at the North through binoculars from a guard post when he became the first sitting president to travel to the DMZ on Nov. 12, 1983. He also made a speech to U.S. soldiers at a base there.

“You are in the frontlines of freedom,” he told them, surrounded by sand bags and camouflage mesh. “You stand between the free world and the armed forces of a system that is hostile to everything we believe in as Americans.”

The Republican later called the visit one of the most unforgettable experiences of his life.

Clinton followed suit on July 12, 1993, shaking hands and chatting with U.S. soldiers as he gazed into North Korea from Observation Post Ouellette and walked on the Bridge of No Return, which had been the site of past prisoner exchanges.

The Democratic president pledged to stand by his insistence that North Korea not go through with its threat to withdraw from the Nuclear Nonproliferation Treaty. It did so in 1994. He also expressed hope for the eventual reunification of the peninsula.

“Someday this will all be one country again,” he said.

Clinton later made a speech and played the saxophone for thousands of soldiers at Camp Casey, which is near the border.

President George W. Bush visited the DMZ on Feb. 20, 2002, also gazing into the North from OP Ouellette about a month after he branded the communist state as part of an “axis of evil,” along with Saddam Hussein’s Iraq and Iran.

His visit came as then-South Korean President Kim Dae-jung was nervous that the U.S. president’s hard line would upset his so-called “sunshine policy” aimed at increasing engagement with the North.

President Barack Obama picked up the binoculars to stare into the North from OP Oullette on March 25, 2012, but this time bullet-proof glass was added for protection.

“You guys are at freedom’s frontier,” Obama told about 50 troops in the mess hall at Camp Bonifas. “The contrast between South Korea and North Korea could not be clearer, could not be starker, both in terms of freedom and in terms of prosperity.”