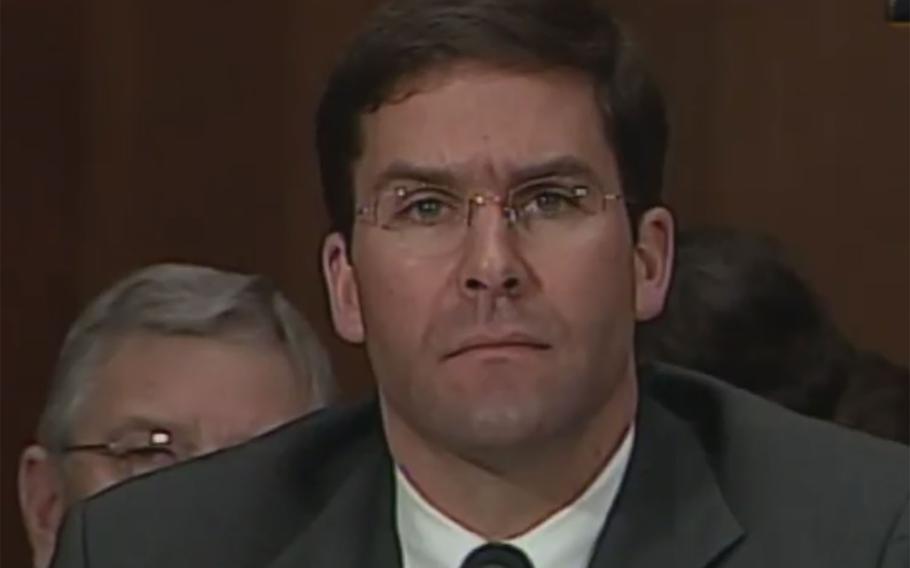 Mark Esper, deputy assistant secretary for the Department of Defense, appears before the Senate Foreign Relations Committee on Jan. 29, 2004 (C-SPAN)

WASHINGTON — President Donald Trump has selected a Raytheon executive and Gulf War veteran to lead the military’s largest service, in his third attempt to fill the Army secretary job, according to an administration official.

The White House will announce Mark Esper as Trump’s selection for the Army’s top civilian, the official confirmed on the condition of anonymity because the White House had yet to make the announcement. The Washington Examiner first reported Esper’s selection Wednesday.

Esper, a 1986 graduate of the U.S. Military Academy at West Point, N.Y., has been Raytheon’s vice president for government affairs since 2010. He is a longtime Washington insider with experience in private industry, at the Pentagon and as a congressional staffer, according to his Raytheon biography. He served on the Capitol Hill staffs of former Sens. Bill Frist and Chuck Hagel, a former defense secretary.

He worked at the Pentagon from 2002 to 2004 as deputy assistant secretary of defense for negotiation policy, according to his biography. In that job, he was responsible for United Nations relations, international agreements, arms control and nonproliferation.

In the military, Esper served as an Army infantry officer, retiring as a lieutenant colonel, according to his biography. He served a combat tour in Iraq from 1990 to 1991 during the first Gulf War and was awarded a Bronze Star medal. During his military career, Esper also received the Legion of Merit, Meritorious Service Medals and the Combat Infantryman’s Badge.

He holds a master’s degree in public administration from the John F. Kennedy School of Government at Harvard University and a doctorate from George Washington University.

Esper is Trump’s third choice to fill the Army secretary job after his first two choices withdrew from consideration. In February, Vincent Viola, an Army veteran and billionaire businessman, announced he would not seek the Army’s top job because he was unable to divest properly from his business interests.

Trump’s second pick for Army secretary, Mark Green, an Army veteran, medical doctor and state senator from Tennessee, decided to withdraw from consideration in May after an uproar over comments he had made about the lesbian, gay, bisexual and transgender community and Muslims. The White House never formally sent his nomination to the Senate.

Robert Speer has been acting Army secretary since Trump took office in January. If confirmed, Esper would replace Eric Fanning, who left the job during the administration of former President Barack Obama.