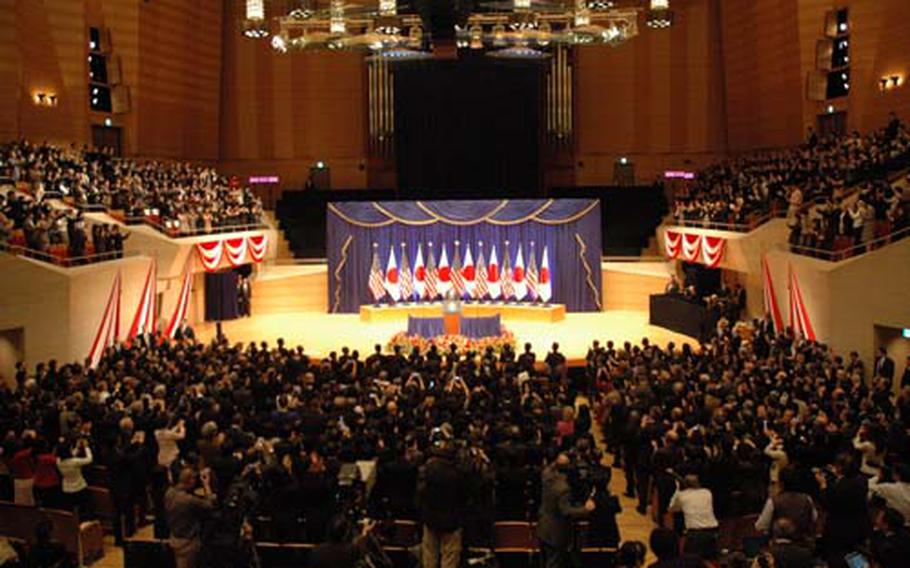 President Obama called on a renewed alliance with Japan in a speech Saturday morning in Tokyo during his first visit to Asia as president. Japan and the United States "have not only reaffirmed our alliance, we’ve agreed to deepen it,” Obama said to a crowd of 2,000 invited guests in the main concert arena of Suntory Hall. (Teri Weaver / S&S)

TOKYO &#8212; President Barack Obama launched his inaugural trip to Asia this weekend by calling for a revitalized alliance with Japan and declaring the United States a member of the Pacific region.

Nuclear threats from North Korea, rising extremism in island nations, growing trade between the United States and Asia, concerns about climate change, and continued human trafficking all unify interests on both sides of the Pacific, Obama said.

&#8220;I want everyone to know, and I want everyone in America to know, that we have a stake in the future of the region, because what happens here has a direct effect on what happens on our lives at home,&#8221; the president said at a morning speech in Tokyo before a crowd of 2,000 invited guests.

Obama&#8217;s call for a stronger relationship with Pacific nations comes as the United States faces a test of wills with Japan, one of its greatest economic and military allies. The two countries are at odds over the future of the U.S. troop presence on Okinawa, Japan&#8217;s southernmost island that hosts nearly half of the almost 50,000 American servicemembers in the country.

&#8220;That is why, at this critical moment in history, the two of us have not only reaffirmed our alliance, we&#8217;ve agreed to deepen it,&#8221; Obama said Saturday morning in the main concert arena of Suntory Hall.

But during his 24-hour visit to Japan that stretched over Friday and Saturday, Obama stopped short of directly tackling the Okinawa issue. Instead, the president acknowledged that Japanese voters had called for &#8220;a promise of change,&#8221; comparing his own historic election last year with that of Prime Minister Yukio Hatoyama, whose Democratic Party of Japan this fall beat out the five-decade rule of the more conservative Liberal Democratic Party.

That change allows for an expeditious review of the three-year-old Marine relocation plan, Obama and Hatoyama said at a Friday night news conference, repeating pledges from earlier in the week.

Obama&#8217;s visit to Japan, two months before the 50th anniversary of the U.S.-Japan alliance, was the first of a four-country tour in Asia. Other planned stops included an Asia-Pacific Economic Cooperation meeting in Singapore, an official state dinner in Beijing and meeting with South Korean leaders and U.S. troops.

On Saturday morning, Obama praised Japan and its neighbors for working together in recent years to build economic ties and encourage democratic values.

The president criticized North Korea for its continued provocations and nuclear ambitions.

Obama also called China&#8217;s emergence as an economic power a success not to be feared.

&#8220;The United States does not seek to contain China. &#8230; The rise of a strong and prosperous China can be a source of strength for the community of nations,&#8221; he said to applause.

Early in his remarks, Obama reflected on his only other visit to Japan when he was a child, remembering the Buddhist temples of Kamakura and the taste of green tea ice cream. He gave special thanks to the residents of a tiny northwestern fishing and logging town that shares his name &#8212; Obama, Japan &#8212; to one of the first of about a dozen rounds of applause.

Later in the speech, Obama turned his attention to Myanmar &#8212; which he referred to as Burma. He called on the military-run government to release its political prisoners and ease its restrictions on human rights or face continued pressure from the United States.

&#8220;Existing sanctions will remain until there are concrete steps toward democratic reform,&#8221; Obama said.

&#8220;I would like for him to start in Okinawa,&#8221; said Iha, whose city includes Marine Corps Air Station Futenma, the focal point of the argument involving the troop relocation on the island.

Last week, Iha brought a resolution to Tokyo in which Okinawan residents called for the closing of the base at Futenma and a halt to the planned relocation to a more rural part of the island.

The people, Iha argued, are worried about the potential dangers of keeping a busy air station in the midst of people&#8217;s homes and businesses.

Iha said the visit was an opportunity for the president to better understand the new government&#8217;s campaign promises to revisit the military agreement. The mayor also said he hoped that next time Obama would visit Okinawa, &#8220;as soon as possible.&#8221;

Obama boosts Asia free trade hopesSINGAPORE &#8212; President Barack Obama raised hopes for creating an Asia-Pacific free-trade region by announcing Saturday that the U.S. would seek to join a smaller group seen as a precursor to a broader Pacific Rim agreement.

News that the U.S. would participate in the Trans-Pacific Partnership was announced in Tokyo and Singapore, drawing applause at the annual Asia-Pacific Economic Cooperation forum.

&#8220;Significant steps like the TPP are important to help keep up the momentum in our efforts to realize the ... vision&#8221; to create a region-wide free trade area said Singapore Prime Minister Lee Hsien Loong.