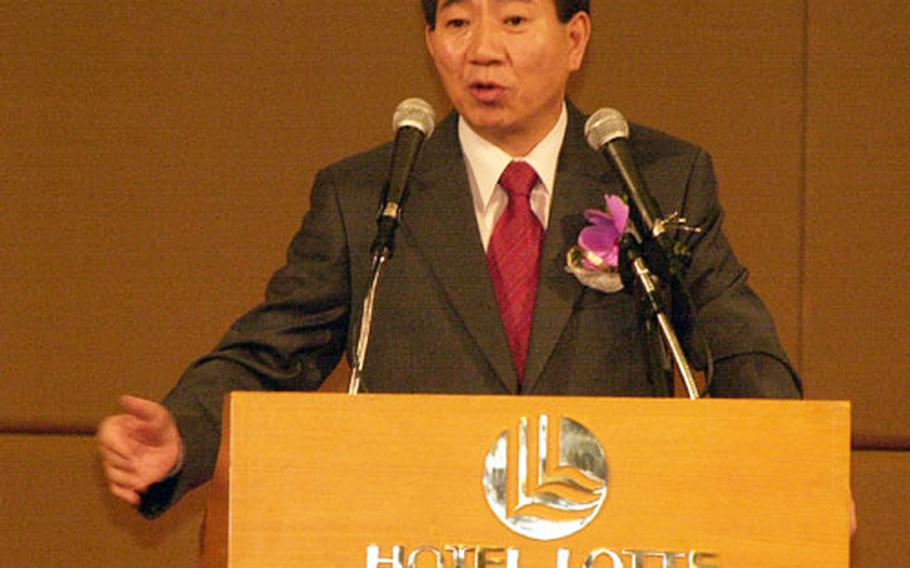 Roh spoke to members of the American and European chambers of commerce about the South Korean economy, the North Korean nuclear threat and the state of U.S.-South Korean relations in the wake of a summer rocked by anti-American protests and calls for revision of the Status of Forces Agreement that governs U.S. troops&#8217; availability to the South Korean legal system.

Roh said he would travel to Washington at the earliest chance after his inauguration to consult with President Bush. He also said he would include the international community in an attempt to persuade North Korea to give up its nuclear project.

Roh, who campaigned amid a rise in anti-Americanism, stressed the importance of the relationship with the United States.

He said there have been &#8220;some misunderstandings&#8221; over candlelight vigils held in downtown Seoul since the end of November, when two U.S. soldiers were acquitted of negligent homicide charges in courts-martial in connection with the June 13 crushing death of two 13-year-old South Korean girls.

Tens of thousands of people have taken to the streets, calling for a SOFA revision and demanding the soldiers, Sgt. Mark Walker and Sgt. Fernando Nino, face trial in South Korean court.

The protests began to shift from anti-U.S. military to anti-America, and various groups called for the boycott of U.S. goods and services and the withdrawal of U.S. Forces Korea from the peninsula.

&#8220;The main focus of the mass gatherings was to emphasize the need to revise the Status of Forces Agreement,&#8221; Roh said, &#8220;but, of course, the demonstrations were staged on the premise that U.S. troops would continue to stay in Korea.

&#8220;These were voices aspiring for a more mature relationship between Korean and the United States.

&#8220;I&#8217;ve heard that you&#8217;re concerned about the anti-U.S. demonstrations. Of course, there are some people who feel that way, but they are not the opinion leaders of the Korean society,&#8221; Roh said. The majority of the Koreans believe &#8220;the alliance with the United States is critical.

&#8220;I don&#8217;t think the anti-U.S. sentiment causes a big problem. ROK-U.S. relations have been, are and will continue to be treasured, and I certainly hope that America will remain our ally in the years to come.&#8221;