Preparing to pin the golden anchor 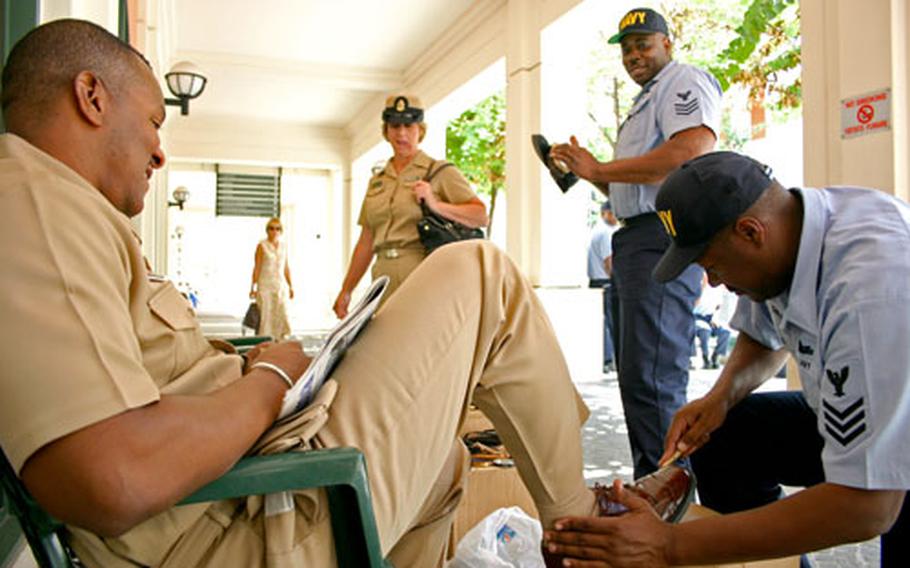 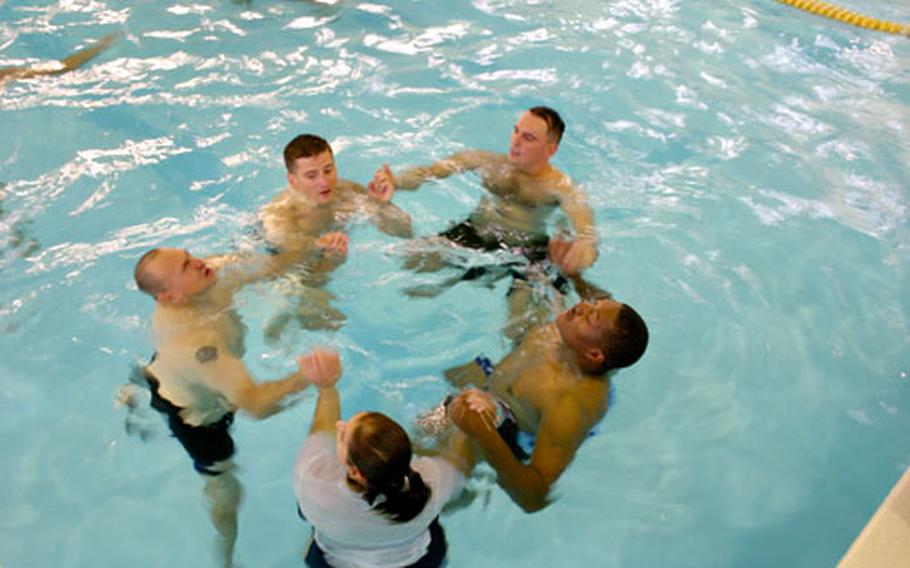 A group of petty officers first class must learn to trust and depend on one another, a recent lesson given to chief petty officer selectees who supported each other as they tread water in the deep-end of a swimming pool Wednesday in Naples, Italy. (Sandra Jontz / S&S) 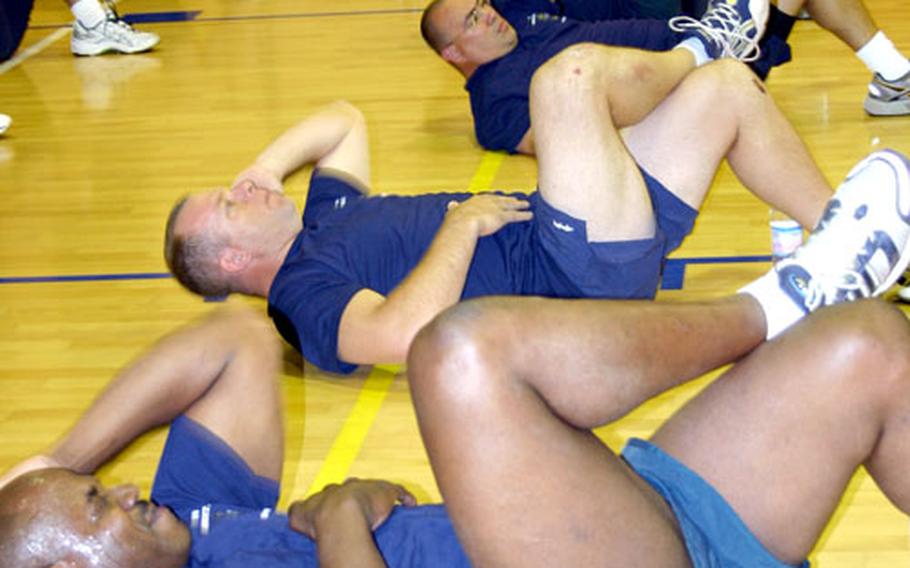 Physical training as a group is a huge part of the six-week transition that petty officers first class go through before pinning on the Navy’s coveted enlisted rank of chief petty officer. (Sandra Jontz / S&S) 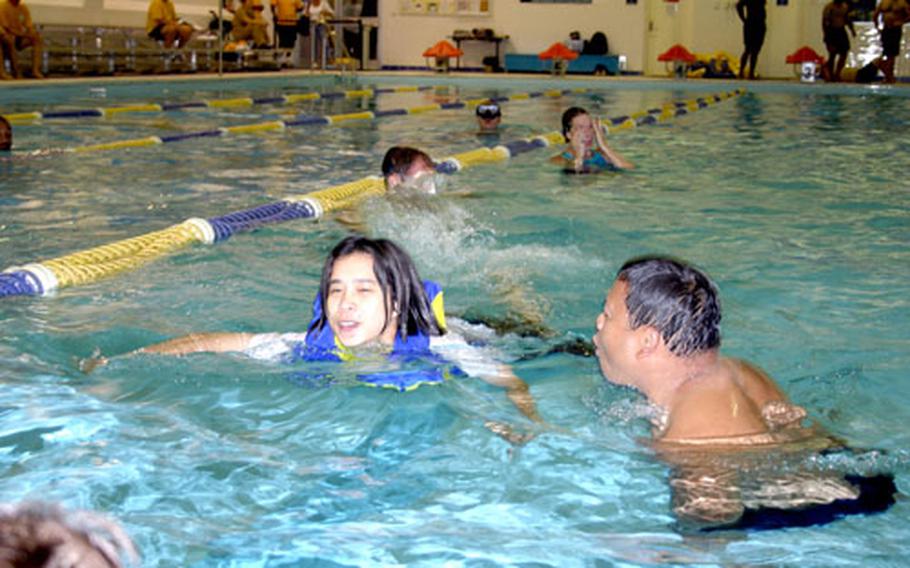 Petty Officer 1st Class Lisa Lazo dog paddles to the rim of a swimming pool during a recent workout with fellow chief petty officer selectees. Though Lazo, a sailor for a little more than 10 years, doesn’t know how to swim, fellow sailors shouted words of encouragement. (Sandra Jontz / S&S)

Editor&#8217;s Note:Each August, thousands of E-6s in the Navy go through a rigorous indoctrination before becoming senior noncommissioned officers. Stars and Stripes is following 21 sailors from Italy and Turkey who are going through the six-week program in Naples, Italy. This is the first of a three-part series appearing in Sunday editions.

But that didn&#8217;t stop the sailor from plunging into the swimming pool last week for a pre-dawn workout with fellow shipmates who have embarked on an arduous journey toward pinning on the coveted Navy rank of chief petty officer.

Part of the training to turn petty officers first class into Navy leaders includes putting trust in one another, and Lazo said she had no choice but to trust her fellow CPO selectees.

Lazo is among the 5,282 Navy E-6s out of an eligible pool of 19,646 worldwide who learned on July 29 that they&#8217;d soon become senior enlisted noncommissioned officers.

From the time the sailors learn they are among the chosen few, they embark on a six-week &#8220;transition&#8221; to trade in their dungarees for khakis. It is held at various bases worldwide.

No other service makes as big a deal out of making E-7 as the Navy, said David Winkler, a historian at the Naval Historical Foundation in Washington.

Beyond wardrobe changes, making the rank means they still work like enlisted sailors, but think like officers, said Chief Petty Officer Martin Strozier, who went through the change two years ago.

Only in the Navy and Marine Corps do E-6s&#8217; service records go before a promotion board and through an arduous promotion process. The reward is admission into a coveted fraternity, several said.

But gone are the days of &#8220;initiations,&#8221; such as having sailors eat phallic-shaped baked bread, wear diapers, or swallow raw eggs dropped from a 6-foot ladder.

Before that shiny golden anchor that an E-7 wears is pinned on at the planned Sept. 16 ceremony, selectees must complete 17 hours of online training from the CPO Selectee E-Learning program &#8212; courses with titles such as &#8220;Resolving Interpersonal Issues&#8221; and &#8220;Situational Leadership II.&#8221;

And the Navy also has begun teaching chiefs the &#8220;fiscal part of the Navy, the costs of doing business, and the value of the output of our goods and services,&#8221; Evangelista said.

&#8220;[But] chiefs will be developed over time. It&#8217;s not just something that we do in a couple of weeks from when the announcement comes out to when we change uniform,&#8221; he said. &#8220;Actually, the transition to chief petty officer can take some time. It takes several years before you&#8217;re really, really comfortable and respond to and answer to the new roles and responsibilities.&#8221;

The earliest use of the Navy term &#8220;chief&#8221; was during the Revolutionary War when cook&#8217;s mate Jacob Wasbie was promoted June 1, 1776, to chief cook while serving on the USS Alfred, according to an account on the Web site www.navyhistory.org.

And now, beyond learning to be leaders, Evangelista said, the CPO selectees also have &#8220;an obligation to find their shipmates not fortunate enough to be selected this year, and mentor them to reach their full potential so it maximizes their ability to be selected next year.