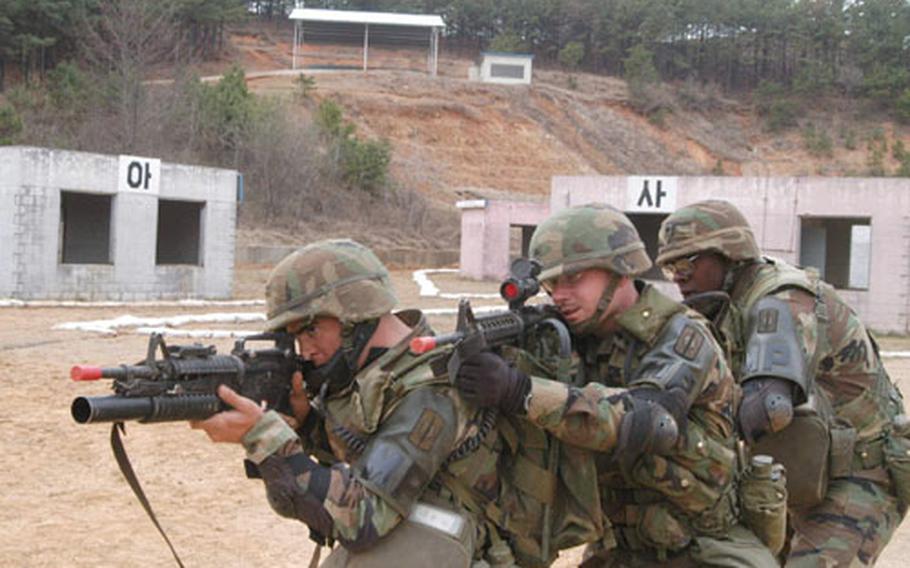 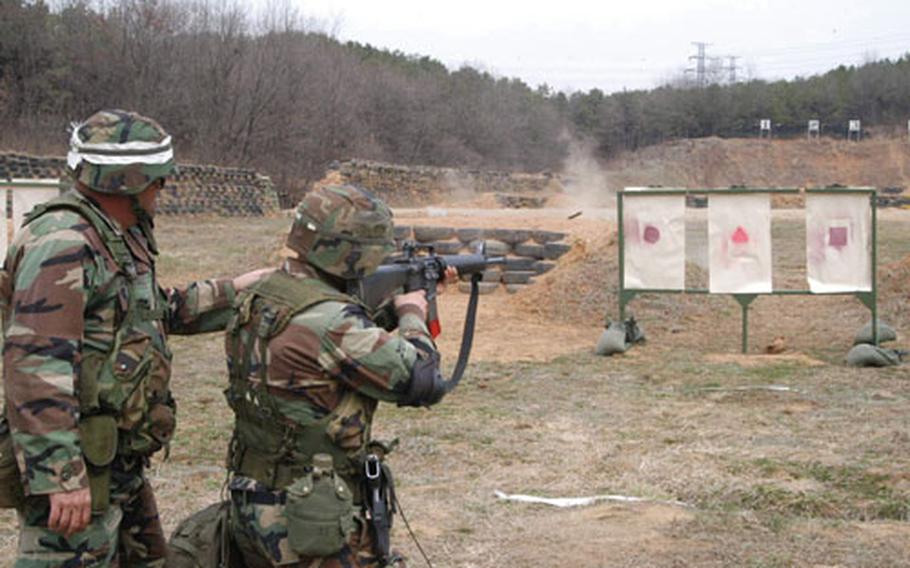 CAMP RED CLOUD, South Korea &#8212; U.S. military police in South Korea are training for urban combat in preparation for future missions in the war on terror here or in other theaters such as Iraq or Afghanistan.

The training, which involves soldiers from the 8th MP Brigade at the Republic of Korea Army&#8217;s Tokaebi Range in Area I, is split into multiple stages. Soldiers from the 55th MP Company were partially through the training at the range on Thursday.

They started with &#8220;reaction firing&#8221; &#8212; shooting at human-sized targets from 13 feet to 81 feet away. The MPs, who had three seconds to make each shot, practiced shooting while walking, running, and turning to their left and right.

They worked with individual instructors while a controller called out the types of shots they had to make over a loud speaker.

Some soldiers left a neat circle of holes in their targets. Others were less accurate, spraying shots wildly or missing the targets as they snapped their rifles up to fire as fast as possible.

The next stage was &#8220;discriminatory firing,&#8221; which also involves shooting at targets up to 81 feet away. Soldiers had to quickly pick out two of three targets &#8212; a triangle, a square, a circle &#8212; and avoid hitting the third target depending on the signal given over the loud speaker.

The last part of the range shooting involved a &#8220;stress shoot&#8221; in which soldiers ran between barriers shooting upright and prone targets from standing, lying and kneeling positions, as well as shooting on the run and turning to their left and right.

The soldiers were on the range for two hours each, firing 298 rounds. To pass each phase they had to score 26 hits out of 32 shots.

One of the soldiers who shot on Thursday, Pfc. Nathan Leo, said he enjoyed the &#8220;upfront confrontation&#8221; and fast thinking needed during discriminatory firing.

&#8220;In the real world I will be able to identify the enemy and not hit the mother and the baby. This is the first time that MPs have done this kind of training here,&#8221; he said.

Another soldier doing the training, Pfc. Chris Cobb, compared it to playing video games but said it is more intense.

The challenge of the exercise is not the difficulty of the individual shots, he added, saying, &#8220;It takes a clear-headed individual to go in there and be prepared for anything.&#8221;

A few hundred yards away from where the soldiers were shooting, other MPs from the 55th were practicing for the training&#8217;s next phase, which involved a blank-fire attack on a mock apartment complex to defeat an &#8220;opposition force&#8221; equipped with laser training gear.

Soldiers ran in and out of the buildings and up and down stairways, ripping open doors and charging inside to clear rooms as their buddies pulled security on the landings.

&#8220;The enemy have occupied an apartment block. The objective is to kill or capture Kim and his men and secure the entire block and not kill the civilians living there,&#8221; Varton said. &#8220;However, some of the civilians may pick up a weapon and shoot while others are just doing what Kim says because they don&#8217;t want him to kill them.&#8221;

The final stage of the training involves a live-fire repeat of the battle with Kim, shooting at targets in the buildings instead of at an opposition force or, as the MPs called it, an OpFor.

The goal of the training is to build muscle memory like a football player does at practice, he said.

&#8220;When you are clearing a house, if you don&#8217;t know how to react instinctively with the correct muscle movements you are going to end up with fratricide. In a close environment you only get one opportunity,&#8221; Champagne said. &#8220;You better be accurate otherwise you are going to become a casualty.&#8221;