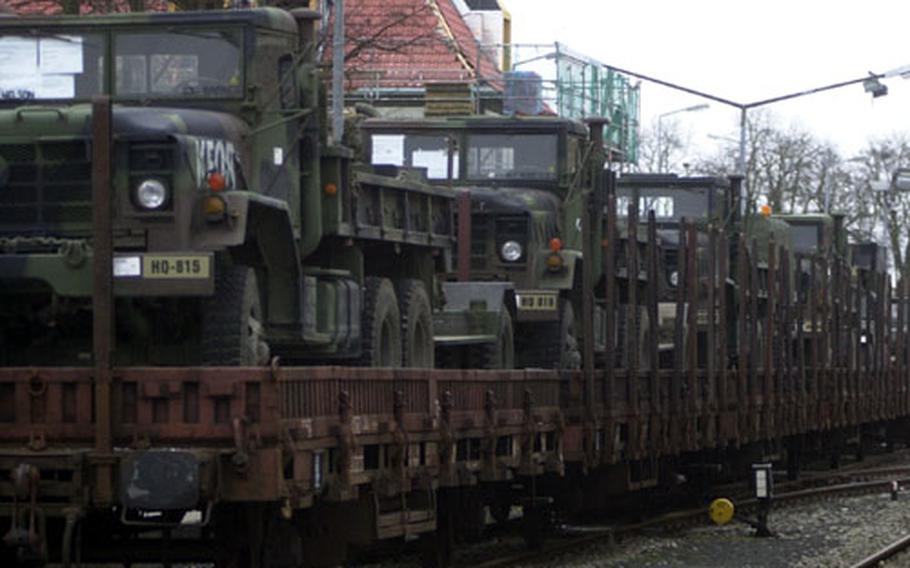 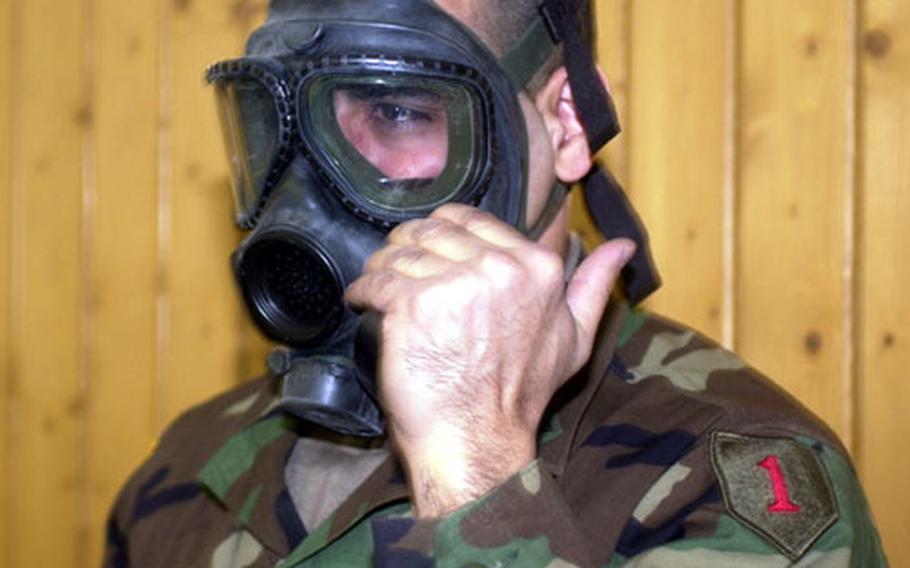 Sgt. Kirten Stoute, a nuclear, biological and chemical weapons expert with the 1st Infantry Division checks out a gas mask as the division headquarters and many of its support units prepare for deployment into Turkey. (Jon R. Anderson / S&S) 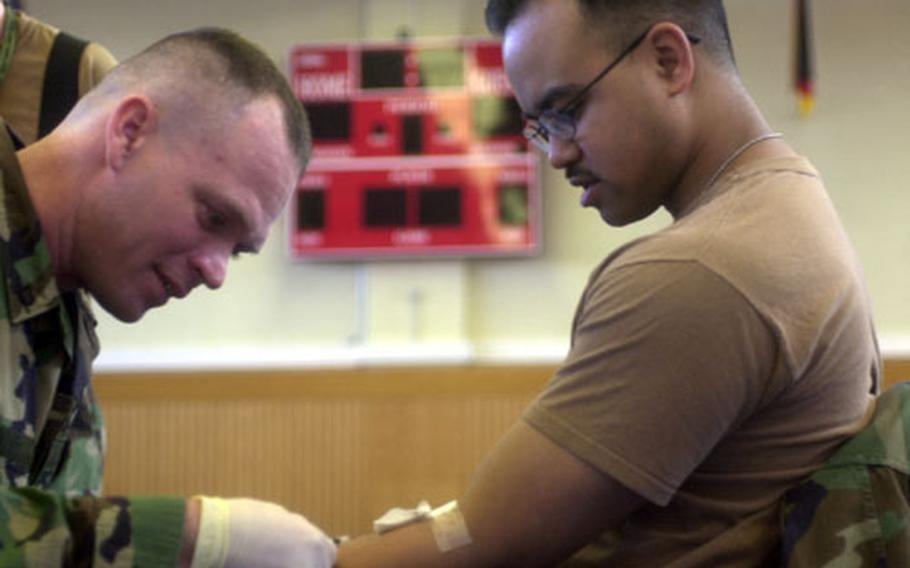 &#8220;Our soldiers are decisively engaged with this deployment. And we are moving out smartly,&#8221; said division spokesman Maj. Mark Ballesteros.

&#8220;I don&#8217;t think we want to get into where our forces are right now, but there are not significant military forces in northern Iraq right now,&#8221; Myers told reporters at the Pentagon on Wednesday.

It has been widely reported that U.S. special operations teams and CIA agents were already in northern Iraq laying the groundwork for a possible invasion, but this is the first time the Pentagon has confirmed &#8212; if indirectly &#8212; the presence of U.S. troops in Iraq.

The Associated Press quoted Abdul Vahid Kheder, an official of the Kurdish Democratic Party in the region, that some 2,000 U.S. military and intelligence specialists are scheduled to enter northern Iraq through the Turkish border to staff and protect the airfields in Dohuk, Irbil and Sulaiymania provinces.

That&#8217;s roughly the same size and composition as the 1st Infantry Division mobilization now under way. Although officials publicly decline to specify where troops are going, several senior sources confirm the units are bound for Turkey.

The contingent &#8212; composed largely of Maj. Gen. John R.S. Batiste&#8217;s &#8220;Big Red One&#8221; division headquarters, as well as key intelligence, communications and medical units &#8212; the contingent is expected to be just the lead element of a much larger task force that will lead an invasion of Iraq from the north, should the White House order Saddam Hussein&#8217;s ouster.

The Turkish government still has not given final approval for U.S. military passage to its southeastern borders with Iraq. According to Turkey&#8217;s constitution, parliamentary leaders must first give their OK before any foreign forces can enter the country in time of war.

&#8220;Everything is depending on the parliamentary process right now,&#8221; said a senior military official familiar with the ongoing deliberations.

The 1st ID units now under way, he said, could find themselves in a holding status waiting for the official approval.

Culminating a flurry of top-level U.S. delegations to Turkey in recent weeks &#8212; including Deputy Defense Secretary Paul Wolfowitz and Myers &#8212; U.S. European Command Gen. James Jones was able to secure tentative agreement from the Turkish military for U.S. troops to pass through Turkey instead of actual basing there, according to an official familiar with the negotiations.

Assuming parliamentary approval, Army officials say privately the initial wave of forces into Turkey should be completed by mid-February.

When the 550-member Turkish Grand National Assembly might convene to consider the question is still very much up in the air, however. The Turkish constitution requires that at least one-third of the legislative body be present for such decisions and that a majority vote is required for approval.

U.S. officials hope a decision will be made before the government closes for Muslim holidays running through the week of Feb. 10.

Meanwhile, the Turks appear to be making their own preparations for conflict.

A U.S. military and diplomatic team is helping with other prudent preparations.

According to the U.S. Embassy spokesman, a nine-person team led by Richard Greene, the State Department&#8217;s deputy assistant secretary for Population, Refugees and Migration, is currently surveying possible sites for refugee camps along the Iraqi border.